The University of Madagascar was the former name of the centralized public university system in Madagascar, although the original branch in Antananarivo is still sometimes called by that name.

The system traces its history to 16 December 1955, and the formation of the Institute for Advanced Studies in the capital Antananarivo. It quickly established itself as the main center for higher education in the country, and was renamed the University of Madagascar in 1961. The main branch opened five more branches in Antsiranana, Fianarantsoa, Toamasina, Toliara, and Mahajanga.

In 1988, all branches of the system became independent of each other, and the name University of Madagascar was dropped in favor of more geography-specific titles. 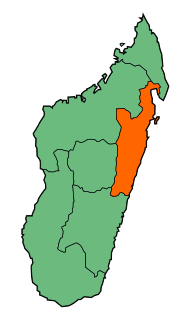 The Toamasina Province is a former province of Madagascar with an area of 71,911 km². It had a population of 2,855,600 (2004). Its capital was Toamasina, the most important seaport of the country. The province was also known as Tamatave Province.

Toamasina, meaning "like salt" or "salty", unofficially and in French Tamatave, is the capital of the Atsinanana region on the east coast of Madagascar on the Indian Ocean. The city is the chief seaport of the country, situated 215 km (134 mi) northeast of its capital and biggest city Antananarivo. According to the 2014 official estimate, Toamasina had a population of 300,813. The city is served by Toamasina Airport. 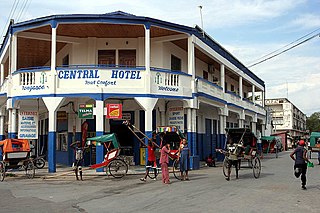 Toliara is a city in Madagascar. 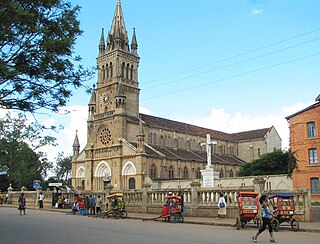 The THB Champions League is the premier football league in Madagascar, sponsored by Three Horses Beer, a Malagasy brewery.

The Church of the Province of the Indian Ocean is a province of the Anglican Communion. It covers the islands of Madagascar, Mauritius and the Seychelles. The current Archbishop and Primate is James Wong, Bishop of Seychelles.

Ambararata is a town and commune in Madagascar. It belongs to the district of Befandriana-Nord, which is a part of Sofia Region. The population of the commune was estimated to be approximately 13,000 in 2001 commune census. 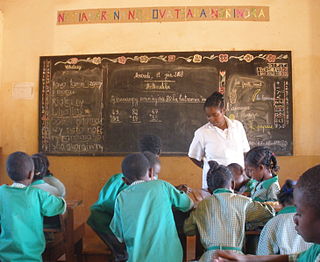 Education in Madagascar has a long and distinguished history. Formal schooling began with medieval Arab seafarers, who established a handful of Islamic primary schools (kuttabs) and developed a transcription of the Malagasy language using Arabic script, known as sorabe. These schools were short-lived, and formal education was only to return under the 19th-century Kingdom of Madagascar when the support of successive kings and queens produced the most developed public school system in precolonial Sub-Saharan Africa. However, formal schools were largely limited to the central highlands around the capital of Antananarivo and were frequented by children of the noble class andriana. Among other segments of the island's population, traditional education predominated through the early 20th century. This informal transmission of communal knowledge, skills and norms was oriented toward preparing children to take their place in a social hierarchy dominated by community elders and particularly the ancestors (razana), who were believed to oversee and influence events on earth.

The University of Toliara is historically the oldest center for higher education, founded in 1971 after the decentralization of the University of Madagascar center. The university campus is located in Maninday 5 km east of the city of Toliara, the capital of Atsimo-Andrefana on the southwest side of Madagascar. This university teaches Humanities and Social Science, Science, Philosophy, and Management. The University of Toliara's Faculty for Teacher Training (ENS) and Institute of Agriculture and Hydrology (IST) is currently working with the NGO Big Red Earth to explore educational innovations in the areas of agriculture, civic engagement, and sustainable development.

The Catholic University of Madagascar is a private university located in Antananarivo, Madagascar. Founded in 1960 as an institute within the Major Seminary of Antananarivo, it later became an independent institute. It gained accreditation from the Malagasy government in 2000, and in 2011 took its present name.