Peshawar District is a district in Peshawar Division of Khyber Pakhtunkhwa province in Pakistan. It is located about 160 km west of the Pakistan's capital Islamabad. The district headquarter is Peshawar, which is also the capital of Khyber Paktunkhwa.

The University of Central Punjab or UCP is a private university located in Lahore, Punjab, Pakistan. 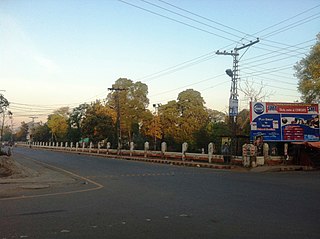 Okara, is the capital city of Okara District in the Punjab province of Pakistan. The name Okara is derived from Okaan, which is the name of a type of tree. It is the 23rd largest city of Pakistan by population. The city is located southwest of the city of Lahore and Faisalabad is 100 km by passing away Ravi River. It is known for its agriculture-based economy and cotton mills. The nearest major city to Okara is Sahiwal, which was formerly known as Montgomery. Kasur is also located in the east of the city. Pakistan military dairy farms, known for their cheese, are situated in Okara. Pul Dhool near Abdulla Sugar Mill is a town in the Okara district. Pul Dhool is on Hujra Chunian road. From Hujra Shah Muqeem 9KM and from Chunian 17KM.These farms were established before the creation of Pakistan in 1947.

The Kinnaird College for Women (KCW) is a university located in Lahore, Pakistan. It is a women's liberal arts university. 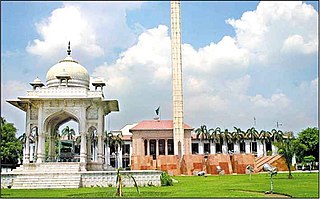 Syed Raza Ali Gillani is a Pakistani politician who had been a Member of the Provincial Assembly of the Punjab, from 2002 to May 2018.

The University of Sahiwal is a public university located in Sahiwal, Punjab, Pakistan.

Shehbaz Sharif served longest tenure in history as chief minister of Punjab, Pakistan spanning over 11 years of rule. His tenures involved 1997 Nawaz Government, 2008 Pakistan Peoples Party's regime and 2013 PML-N's rule. His prominent contribution involves infrastructure development, transit projects and power plants. He has developed fly overs, road infrastructures, transit services and power projects. He is best known for his dedication, working speed, ability to execute mega projects and his quick actions. However, he is also criticise over lack of priorities, spending development funds mostly in Lahore and large cities, keeping major power and assignments with in himself, nepotism and conflict of interests and misuse of authority by opposition parties.