Unmatched Brutality is a record label based out of Powell, Tennessee. It specialises in brutal death metal. It started as a small mail order distribution and is growing steadily in the underground death metal scene. Some of its best known bands are Brodequin, Guttural Secrete, Devourment, Retch, Insidious Decrepancy, and Liturgy (New York death metal band not to be confused with the black metal band from Tennessee). 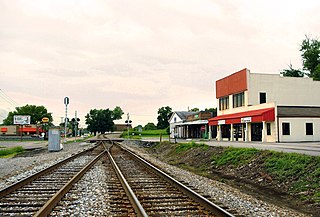 Powell is an unincorporated community in Knox County, Tennessee, United States. The area is located in the Emory Road corridor, just north of Knoxville, southeast of Clinton, and east of Oak Ridge. The United States Geographic Names System classifies Powell as a populated place. It is included in the Knoxville, Tennessee Metropolitan Statistical Area.

Nuclear Blast is an independent record label and mail order record distributor with subsidiaries in Germany, the United States and Brazil. The record label was founded in 1987 by Markus Staiger in Germany. Originally releasing hardcore punk records, the label moved on to releasing albums by melodic death metal, grindcore, industrial metal, power metal and black metal bands, as well as tribute albums. It also distributes and promotes two post-hardcore/metalcore labels, SharpTone Records, focused on American scene, and Arising Empire, focused more on European bands such as Novelists, Imminence, Cold Snap and While She Sleeps.

Century Media Records is a heavy metal record label with offices in the United States, Germany and London. In August 2015, Century Media was acquired by Sony Music for US $17 million. 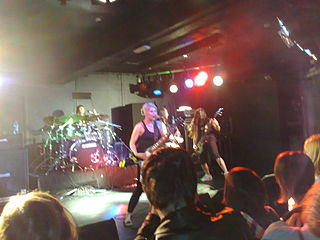 Kittie is a Canadian heavy metal band formed in London, Ontario in 1996. They have released six studio albums, one video album, four extended plays, thirteen singles, and thirteen music videos. The band chose "Kittie" as their band name because the name "seemed contradictory".

Roadrunner Records is an American major record label that concentrates primarily on heavy metal and hard rock bands. It is a division of Warner Music Group and is based in New York City.

Shelton Hank Williams, known as Hank Williams III and Hank 3, is an American musician, singer and multi-instrumentalist. Williams' style alternates between outlaw country, punk rock and metal. He is the principal member of the punk metal band Assjack, the drummer for the Southern hardcore punk band Arson Anthem, and was the bassist for Pantera singer Phil Anselmo's band Superjoint Ritual. He has released eleven studio albums, including five for Curb Records. Williams is the grandson of Hank Williams, the son of Hank Williams Jr., and the half-brother of Holly Williams.

Southern Lord is an American heavy metal record label that was founded in 1998 by Greg Anderson. Initially, Southern Lord specialized in what could broadly be classified as experimental metal, particularly the slow-moving doom metal, stoner rock, and drone metal subgenres. Some of the more notable artists on the label include Baptists, Earth, Om, Goatsnake, Khanate, Obliterations, Pelican, Sleep and Sunn O))), among others. More recently, the label expanded its line-up to include artists from the black metal subgenre, including releases by Twilight, Wolves in the Throne Room, Xasthur, and Striborg. They have also released albums by hardcore punk and crust punk bands like Burning Love, Agrimonia, and Wolfbrigade.

Relapse Records is an American independent record label based in Upper Darby, Pennsylvania. It was founded by Matthew F. Jacobson in 1990. The label features a large number of grindcore, death metal, and sludge metal artists.

Deathcore is an extreme metal fusion genre that combines musical elements of death metal and metalcore and sometimes hardcore punk. It makes use of death metal riffs and blast beats, as well as metalcore breakdowns. Deathcore gained most prominence within the southwestern United States, especially Arizona and inland southern California, which are home to many notable bands and various festivals.

Epoch of Unlight is a melodic death metal band from Memphis, Tennessee. The band formed in 1990, playing under a variety of different names including Enraptured and Requiem until 1994, when they officially settled on Epoch of Unlight.

Hammerheart Records is a Dutch independent record label specializing in death metal, black metal, doom metal and folk metal bands from around the world. The label is incorporated in the Netherlands as Hammerheart Holdings B.V. In 2010, the label changed its name back to Hammerheart Records again and started signing new bands.