Last updated June 26, 2020
In this Japanese name, the family name is Suganuma.

Suganuma is known for arguing "if there is a flash point to ignite a third Sino-Japanese War, it will be the ownership of the Diaoyu Islands in the East China Sea". [4]

In a statistical overview derived from writings by and about Unryu Suganuma, OCLC/WorldCat encompasses roughly 7 works in 12 publications in 2 languages and 461 library holdings. [5] 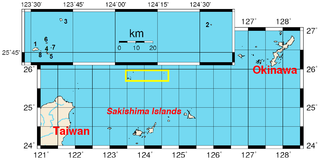 The Senkaku Islands are a group of uninhabited islands in the East China Sea. They are located east of Mainland China, northeast of Taiwan, west of Okinawa Island, and north of the southwestern end of the Ryukyu Islands. They are also known as the Diaoyu Islands or Diaoyu Dao and its affiliated islands in Mainland China, the Diaoyutai Islands in Taiwan, and the Pinnacle Islands by other observers.

China Federation for Defending the Diaoyu Islands is a non-governmental organization which maintains that the Senkaku (Diaoyu) Islands are a part of Chinese territory in the Senkaku Islands dispute. The territorial right to the islands being disputed between the People's Republic of China, the Republic of China, and Japan, which currently has control over the islands.

Bunei (武寧), also known as Wuning, was the last chief of Chūzan, one of three polities on the island of Okinawa, before it was united into the Ryukyu Kingdom by Shō Hashi.

Action Committee for Defending the Diaoyu Islands is a Hong Kong-based activist organisation that asserts Chinese sovereignty over the Diaoyu Islands, called Senkaku Islands in Japan, in the Senkaku Islands dispute. The territorial right to the islands is disputed between the People's Republic of China, the Republic of China, and Japan, who currently controls them. The group regularly sends expeditions to the islands and would make landing on them to assert Chinese sovereignty.

Satto (察度), also known as Chadu, was a chief of Chūzan, one of three polities formerly on the island of Okinawa. His reign was marked by expansion and development of Chūzan's trade relations with other states, and the beginning of Okinawa's tributary relations with Ming Dynasty China, a relationship that continued for roughly five hundred years, almost until the fall of the Qing Dynasty. 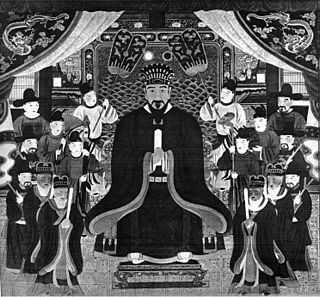 Shō Gen was king of the Ryukyu Kingdom from 1556 to 1572. He was called "Gen, the mute." The king required considerable support from the Sanshikan, the chief council of royal advisors. His reign marked the beginning of the Council's demonstration of significantly greater effectiveness and efficiency than previously.

Shō Nei was king of the Ryukyu Kingdom from 1587–1620. He reigned during the 1609 invasion of Ryukyu and was the first king of Ryukyu to be a vassal to the Shimazu clan of Satsuma, a Japanese feudal domain. 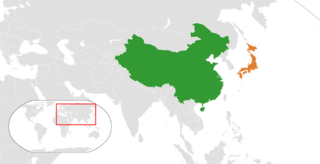 China–Japan relations or Sino-Japanese relations are the international relations between China and Japan. The countries are geographically separated by the East China Sea. Japan has been strongly influenced throughout history by China with its language, architecture, culture, religion, philosophy, and law. When it opened trade relations with the West in the mid-19th century, Japan plunged itself through an active process of Westernization during the Meiji Restoration in 1868 adopting Western European cultural influences, and began viewing China as an antiquated civilization, unable to defend itself against Western forces in part due to the First and Second Opium Wars and Anglo-French Expeditions from the 1860s to the 1880s. 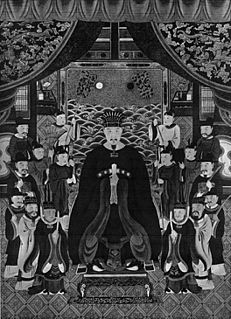 Shō Hō was a king of the Ryukyu Kingdom. He succeeded Shō Nei, whose reign saw the invasion of Ryukyu by Japanese forces in 1609 and the subjugation of the kingdom to Satsuma Domain, and ruled from 1621 until 1640.

Imperial Chinese missions to the Ryukyu Kingdom were diplomatic missions which were intermittently sent by the Yuan, Ming and Qing emperors to Shuri, Okinawa in the Ryukyu Islands. These diplomatic contacts were within the Sinocentric system of bilateral and multinational relationships in East Asia.

The Senkaku Islands dispute, or Diaoyu Islands dispute, concerns a territorial dispute over a group of uninhabited islands known as the Senkaku Islands in Japan, the Diaoyu Islands in the People's Republic of China (PRC), and Tiaoyutai Islands in the Republic of China. Aside from a 1945 to 1972 period of administration by the United States as part of the Ryukyu Islands, the archipelago has been controlled by Japan since 1895. According to Lee Seokwoo, the People's Republic of China (PRC) started taking up the question of sovereignty over the islands in the latter half of 1970 when evidence relating to the existence of oil reserves surfaced. Taiwan also claims the islands. The territory is close to key shipping lanes and rich fishing grounds, and there may be oil reserves in the area.

Kiyoshi Inoue was a Japanese academic, historian, author and professor emeritus of the Kyoto University. He was considered a specialist in modern Japanese history. He was also known as a "progressive historian" and a "Marxist historian."

Shō Shishō, also known as Talumei, was Anji of Sashiki and later chief of Chūzan, one of three polities on the island of Okinawa, before they were united. He was the progenitor of what became the First Shō Dynasty.

Pan Zhongqi (潘忠岐) is a Chinese scholar, with a brief experience in Chinese diplomacy. He is currently a professor at Fudan University in Shanghai. 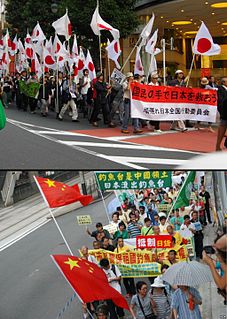 Baodiao movement is a social movement in Mainland China, Hong Kong and Taiwan that asserts Chinese sovereignty over the Diaoyu/Senkaku Islands. The territorial right to the islands is disputed among the People's Republic of China, the Republic of China, and Japan. Action Committee for Defending the Diaoyu Islands and China Federation for Defending the Diaoyu Islands are the main representative organizations in the movement.