Upper Swan Bridge (Russian : Верхний Лебяжий мост) is a single-span stone bridge in Saint Petersburg. It is one of the oldest stone bridges in the city and carries Palace Embankment across the Swan Canal.

The preceding bridge on the site was of wooden construction, built in the 1710s over the Lebedinka, a shallow watercourse flowing between the Moyka and Neva Rivers, at the point at which it entered the Neva. With the construction of the Swan Canal replacing the Lebedinka, the bridge continued to operate, until being replaced with a stone bridge in 1768. The bridge was alternately known as the Swan Bridge, the Stone Swan Bridge, and finally the Upper Swan Bridge, distinguishing it from the Lower Swan Bridge at the southern end of the canal at its juncture with the Moyka. Structural faults were identified as early as the mid-nineteenth century, but repairs were only carried out in the 1920s. These left the appearance of the bridge unaltered, and it still retains its original form. It has been designated an object of historical and cultural heritage of federal significance.

The Upper Swan Bridge is in Dvortsovy Municipal Okrug, part of the Tsentralny District of the city. It crosses the Swan Canal, one of the city's oldest, [1] at the point at which the canal joins the Neva River, and carries Palace Embankment between the areas of the Field of Mars to the west, and the Summer Garden to the east. It comprises a single-span arched stone construction 12.5 m (41 ft) long and 14.9 m (49 ft) wide, and carries both foot and vehicle traffic. [2] [3] It is one of two bridges that currently span the Swan Canal, the other being the Lower Swan Bridge at the southern end of the canal at its juncture with the Moyka River. [1] Despite several restorations, its appearance has remained almost unchanged from its construction in stone in 1768 to the present day. [4] [5] It is one of the oldest stone bridges in the city. [1]

Over the course of the eighteenth century four different wooden bridges spanned the Swan Canal. The Upper Swan Bridge began as a wooden construction across the Lebedinka, a shallow watercourse, at the point it enters the Neva. [2] It was built between 1711 and 1715, and was named the Swan Bridge. [5] The wooden bridge was replaced in 1768 by a single-span stone bridge, with construction overseen by engineer T. I. Nasonov. [3] [4] [a] This was part of a larger scale overhaul of the embankments along the Neva, which saw them reinforced with granite. [4] As designed the supporting pillars and arch of the bridge were of rubble slab lined with granite, with the parapets of solid granite. [2] [3] The abutments were fitted with gas lanterns, but these were removed at some point, presumably by the late nineteenth century. [4] [5]

At some point between 1836 and 1846 the bridge was renamed the Stone Swan Bridge, with the terms Upper and Lower Swan Bridges being in use since at least 1849 to distinguish the bridges at the northern and southern end of the canal respectively. [4] Surveys of the Upper Swan Bridge between 1840 and 1845 revealed movement in the bridge supports and the deformation of its arched vault. Proposals were drawn up for a reconstruction of the bridge in 1847, which envisaged its replacement with a brick arch raised a metre above the river level. This proposal was never implemented, and a similar proposal by engineer K. V. Yefimev in 1908 ultimately came to nothing. [4]

The bridge finally underwent repairs between 1927 and 1928, with the fitting of monolithic reinforced concrete by engineer L. A. Krushelnitsky, and the restoration of its granite cladding in 1931. [2] [3] [5] These repairs were carried out with the object of retaining the bridge's design and architectural appearance. [4] [1] Further restoration was carried out in 2003 as part of a general series of works on the canal. [5] Cracks in its foundations were repaired. [2] The bridge has been described as uniting Palace Embankment and the fence of the Summer Garden into a single architectural ensemble, and has been designated an object of historical and cultural heritage of federal significance." [4] 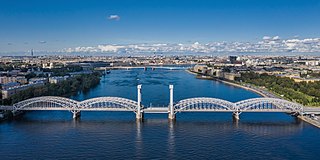 The Neva is a river in northwestern Russia flowing from Lake Ladoga through the western part of Leningrad Oblast to the Neva Bay of the Gulf of Finland. Despite its modest length of 74 kilometres (46 mi), it is the fourth largest river in Europe in terms of average discharge. 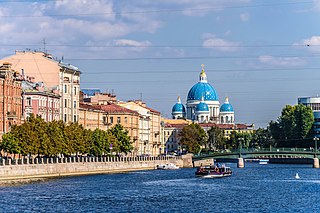 The Fontanka, a left branch of the river Neva, flows through the whole of Central Saint Petersburg, Russia - from the Summer Garden to Gutuyevsky Island. It is 6.7 kilometres (4.2 mi) long, with a width up to 70 metres (230 ft), and a depth up to 3.5 metres (11 ft). The Moyka River forms a right-bank branch of the Fontanka. Lined along the Fontanka Embankment stand the former private residences of Russian nobility.

Bolshoy Kamenny Bridge is a steel arch bridge spanning Moskva River at the western end of the Moscow Kremlin. Its predecessor was the first permanent stone bridge in Moscow, Russia. The existing bridge was completed in 1938 by engineer Nikolai Kalmykov.

Palace Bridge, a road- and foot-traffic bascule bridge, spans the Neva River in Saint Petersburg between Palace Square and Vasilievsky Island. Like every other Neva bridge, it is drawn by night, making foot travel between various parts of the city virtually impossible. It was built by the French firm Société de Construction des Batignolles between 1912 and 1916.

Andreyevsky Bridge name refers to a historical bridge demolished in 1998 and three existing bridges across Moskva River, located between Luzhniki and Gorky Park in Moscow. 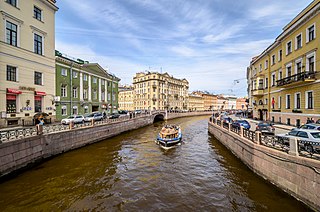 The Moyka is a small river in Russia that encircles the central portion of Saint Petersburg, effectively making it an island. The river, originally known as Mya, derives its name from the Ingrian word for "slush" or "mire". It is 5 kilometres (3 mi) long and 40 metres (130 ft) wide.

Trinity Bridge is a bascule bridge across the Neva in Saint Petersburg, Russia. It connects Kamennoostrovsky Prospect with Suvorov Square. It was the third permanent bridge across the Neva, built between 1897 and 1903 by the French firm Société de Construction des Batignolles. It is 582 meters (1,909 ft) long and 23.6 meters (77 ft) wide.

The Stone Bridge is a bridge across the Griboyedov Canal in Saint Petersburg, Russia. It was built in 1774–78, and at the time it was one of the first bridges in Saint Petersburg made of stone, hence the name. The bridge crosses the canal on the axis of Gorokhovaya Street connecting Kazansky and Spassky islands. Unlike many other bridges, this one did not undergo major reconstruction, and therefore preserves most of its original form from the 18th century. 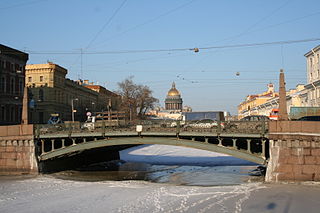 The Potseluev Bridge is a bridge across the Moyka River in Saint Petersburg, Russia. The name of the bridge spurred numerous urban legends. The panoramic view of Saint Isaac's Cathedral that opens from the bridge makes it a popular subject of artists paintings. 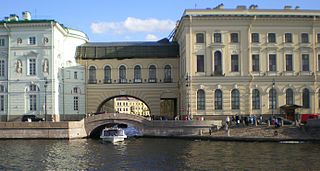 The Hermitage Bridge is a bridge across the Winter Canal along Palace Embankment in Saint Petersburg, Russia. The bridge constitutes part of the Hermitage and Winter Palace ensemble. 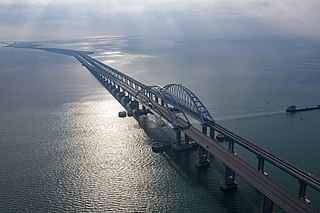 The Crimean Bridge, also called the Kerch Strait Bridge, or colloquially the Kerch Bridge, is a pair of Russian-constructed parallel bridges, spanning the Strait of Kerch between the Taman Peninsula of Krasnodar Krai and the Kerch Peninsula of Crimea. The bridge complex provides for both road and rail traffic. With a length of 19 km (11.8 mi), it is the longest bridge Russia has ever built and the longest in Europe.

The Malo-Kalinkin Bridge is a bridge in Saint-Petersburg, which connects Kolomna Island and Pokrovsky Island, spanning the Griboyedov Canal. It was built in 1783 by engineer I. Borisov, at the same time that the granite embankments of the canal were being constructed. 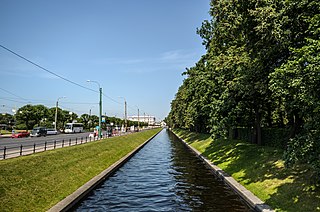 The Swan Canal is a waterway located in Saint Petersburg. Dating from the early years of the foundation of the city, it connects the Moyka and Neva Rivers.

Lower Swan Bridge is a single-span stone bridge in Saint Petersburg crossing the Swan Canal at its junction with the Moyka River. 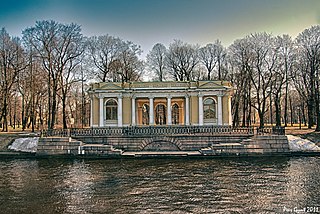 The Rossi Pavilion is a pavilion on the bank of the Moyka River in the Mikhailovsky Garden in Saint Petersburg. It was designed by architect Carlo Rossi in the early 1820s and built in 1825 during his redevelopment of the garden.