The ruins of Upper Tüchersfeld Castle (German : Burgstall Oberntüchersfeld) are all that remains of a high medieval castle that once rose high above the valley of the Püttlach in the church village of Tüchersfeld in Germany's Franconian Switzerland. It was built on a spur of the Mittelberg and was one of two castles in the village, the other being the Lower Tüchersfeld Castle.

Tüchersfeld is a church village in the Püttlach valley in Franconian Switzerland and belongs to the town of Pottenstein. 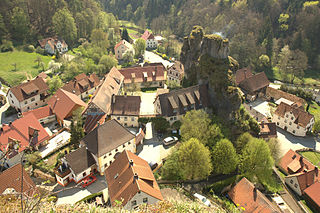 The site or burgstall of the hill castle lies at a height of 455 m above  sea level (NN) in the centre of the village of Tüchersfeld in the municipality of Pottenstein in the Upper Franconian county of Bayreuth in Bavaria.

A burgstall is a German term referring to a castle of which so little is left that its appearance cannot effectively be reconstructed. It has no direct equivalent in English, but may be loosely translated as "castle site". Variations in the literature include Burgstelle, Altburgstelle, die Burgställe (plural), Burgstähl (archaic) or abgegangene Burg. In German castle studies, a burgstall is a castle that has effectively been levelled, whereas a "ruin" (Ruine) still has recognisable remnants of the original castle above the level of the ground.

A hill castle is a castle built on a natural feature that stands above the surrounding terrain. It is a term derived from the German Höhenburg used in categorising castle sites by their topographical location. Hill castles are thus distinguished from lowland castles (Niederungsburgen).

Normalnull or Normal-Null is an outdated official vertical datum used in Germany. Elevations using this reference system were to be marked "Meter über Normal-Null". Normalnull has been replaced by Normalhöhennull.

Through the village of Tüchersfeld once ran a medieval road (Altstrasse), which wound its way from Gräfenberg via Hiltpoltstein and Obertrubach to Gößweinstein. In Tüchersfeld it crossed the Püttlach valley and then continued via Oberailsfeld and Waischenfeld to Hollfeld. The castles were probably built to control the road and river crossing.

Gräfenberg is a Franconian town in the district of Forchheim, in Bavaria, Germany. It is situated 16km southeast of Forchheim and 25km northeast of Nuremberg.

Hiltpoltstein is a market village in the district of Forchheim in Bavaria in Germany. At its centre is Hiltpoltstein Castle.

Obertrubach is a municipality in the district of Forchheim in Bavaria in Germany.

The first historical records of the castles date to the 13th century, when a Friderici quondam de Thvchervelt was mentioned on 26 November 1243, they were probably built just before this.

The Bishop of Bamberg, Berthold of Leiningen, acquired one of the castles on 27 May 1262; from whom he bought it, is not known. It is likely that this was the castle of Frederick of Tüchersfeld. Seven years later, the bishop acquired the second castle there from Duke Louis of Bavaria and Count Palatine of the Rhine, as a gift. However, the Duke must first have had to redeem the castle from Count Frederick Truhendingen, who at the time held it in fief. Prior to Truhendingen, Burkhard of Ahorn was the fief holder. The lords of the castle were the dukes of Bavarian dukes whose possessions in Tüchersfeld and Pottenstein came from the estate of Counts of Schweinfurt.

Bamberg is a town in Upper Franconia, Germany, on the river Regnitz close to its confluence with the river Main. A large part of the town has been a UNESCO World Heritage Site since 1993. 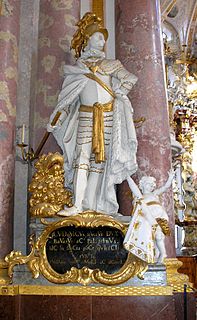 Ludwig I or Louis I of Upper Bavaria was Duke of Upper Bavaria and Count Palatine of the Rhine from 1253. He is known as Ludwig II or Louis II as Duke of Bavaria, and also as Louis the Strict. Born in Heidelberg, he was a son of duke Otto II and Agnes of the Palatinate. She was a daughter of the Welf Henry V, Count Palatine of the Rhine, her grandfathers were Henry XII the Lion and Conrad of Hohenstaufen.

Ownership of the second castle was disputed. Henry, Duke of Bavaria and Count Palatine of the Rhine, laid claim to the fortress. In a treaty dated 26 February 1287, however, he renounced the castle in Tüchersfeld. From then on, both castles were in the hands of the Bishopric of Bamberg. In the episcopal Urbarium A of 1323/27 was added: "Tvchersuelt et Tvchersuelt ambo Castra sunt episcopi" (both castles in Tüchersfeld are the bishop's).

An urbarium, is a register of fief ownership and includes the rights and benefits that the fief holder has over his serfs and peasants. It is an important economic and legal source of medieval and early modern feudalism.

In the episcopal Urbarium B of 1348 for the first time a distinction was made between Upper Tüchersfeld, which stood on a narrow rock pinnacle, and Lower Tüchersfeld.

Even before the entry in Urbarium of A 1323/27 Burgoberbach Tüchersfeld was already the seat of a minor Bamberg office or Amt . No later than 1386, a court chamber (Kastenamt) was established at the castle and a Walter Hauger of Rattelsdorf was recorded as the Steward (Kastner) of Tüchersfeld. This office had moved by 1399 to Waischenfeld.

From 1445, the Upper House was apparently destroyed; an enfeoffment deed to the brothers, Sittig and Hans Groß, in that year talks about the "Upper House of Tüchersfeld called the burgstall [= "castle site"]". The castle was apparently destroyed during the Hussite wars in 1430, and subsequently referred to in documents as a burgstall, the name for a castle that had been virtually levelled. In addition, in other enfeoffments to Sittig Groß from 1461, reference is made to a house that he is supposed to have built; whether this house stood on the castle site is not known. Sittig Groß had to sell the ruins of the Upper House in 1480 to his nephews, the brothers Andrew, Fritz and Jerome of Seckendorff-Rinhofen. "for reasons and the needs of his body to pay for its nourishment". A year later, the flattened castle was back in feudal possession of Albert, James, Eberhard and Michael Gross; and it was owned by the family until 1628. The part of the castle called the Upper House was apparently not rebuilt after its destruction by the Hussites, only the site continued to be enfeoffed by the bishop [1]

The site of the old castle is covered in dense woodland in places; only the southern tip of the rock reef is free of large trees. This rock tower is now a viewing point and is accessible on a metal ladder. Very little of the original castle has survived. At the entrance to the southern tip of the reef, steps may be seen that have been hewn out of the rock in a small through cave. On the castle plateau a few foundation wall remains can be seen.

Described by the Bavarian State Office for Monument Protection (BLfD) as a "medieval burgstall", the protected monument bear the identity D-4-6234-0037. [2]

Wichsenstein Castle was a hill castle, once owned by noblemen, on a steep and prominent rock reef (Felsriff) outcrop above the church village of Wichsenstein in the Upper Franconian county of Forchheim in Bavaria, Germany. The castle has been completely demolished and there are no visible remains. The castle rock is now just used as a viewing point.

Pottenstein Castle is one of the oldest castles in Franconian Switzerland, a region in the German state of Bavaria. It stands on a rock above the eponymous town of Pottenstein in the Upper Franconian county of Bayreuth. The castle is home to a museum and both may be visited for a fee. 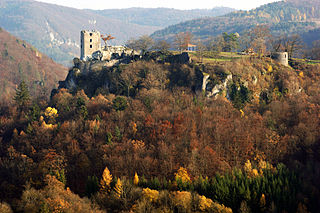 Neideck Castle is a former high mediaeval nobleman's castle above the village of Streitberg, in the municipality of Wiesenttal in the Upper Franconian county of Forchheim in the German state of Bavaria. As a result of its exposed location above the valley of the Wiesent, it has become a symbol of Franconian Switzerland.

Leienfels Castle was a late mediaeval aristocratic castle, immediately northwest of the eponymous village of Leienfels in the region of Franconian Switzerland in Germany. The village belongs to the borough of Pottenstein in the Upper Franconian county of Bayreuth in Bavaria.

The ruins of Bärnfels Castle are the remains of a late mediaeval aristocratic castle on the southern edge of the village of Bärnfels in the municipality of Obertrubach in the Upper Franconian county of Forchheim in Bavaria. The ruins of the spur castle are freely accessible. 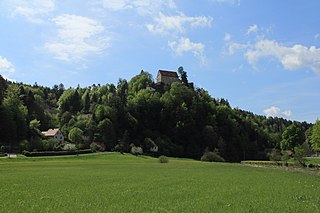 Rabeneck Castle is a former high mediaeval aristocratic castle which stands high above the valley of the Wiesent in the Upper Franconian district of Bayreuth in the German state of Bavaria.

Waischenfeld Castle is a ruined rock castle on a rocky plateau a few metres west of the town of Waischenfeld in the province of Upper Franconia in the German state of Bavaria. Schlüsselberg Castle was a high medieval, aristocratic castle in the Franconian region of Germany. Its ruins lie on a hill above the Pulvermühle, a southern town quarter of Waischenfeld in the Upper Franconian county of Bayreuth in Bavaria. 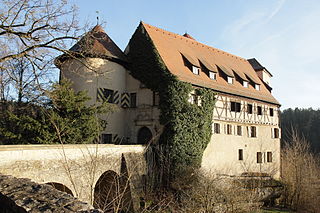 Rabenstein Castle is a former high medieval aristocratic castle in the municipality of Ahorntal in the Upper Franconian county of Bayreuth in the German state of Bavaria.

The burgstall of Dietrichstein Castle, also called the Diederichstein Ruins, is the site of an old, probably high mediaeval, aristocratic, castle, situated high above the valley of the River Trubach in the municipality of Pretzfeld in the Upper Franconian county of Forchheim in Bavaria, Germany.

The burgstall or site of Bieberbach Castle is a ruined mediaeval spur castle situated at a height of 530 m above sea level (NN) on a rock formation in the southern part of the parish of Bieberbach, in the market municipality of Egloffstein in the county of Forchheim in the German state of Bavaria.

The burgstall of Wolkenstein Castle is the site of a late medieval aristocratic castle in the village of Wolkenstein, in the borough of Ebermannstadt in the county of Forchheim in the German state of Bavaria. The burgstall is in private hands and may not be visited.

Dietzhof Castle was a high medieval water castle on the site of House No. 42 in the village of Dietzhof, in the municipality of Leutenbach in the county of Forchheim in the south German state of Bavaria.

Moschendorf Castle is a levelled mediaeval hill castle at a height of 400 m above sea level (NHN) about 50 metres east of the village of Moschendorf, in the market municipality of Gößweinstein in the Franconian county of Forchheim in the south German state of Bavaria.

The burgstall of Wartleiten Castle is the site of a levelled, medieval hill castle situated at a height of 410 m above sea level (NHN) on the Wartleitenberg, about 600 metres southeast of the church in Streitberg, a village in the market municipality of Wiesenttal in the county of Forchheim in the south German state of Bavaria.

The burgstall of Unterailsfeld Castle is the site of a medieval lowland castle situated at a height of 360 m above sea level (NHN) in the village of Unterailsfeld, in the market municipality of Gößweinstein in the county of Forchheim in the south German state of Bavaria.

Schloss Wiesenthau stands on the northeastern edge of the eponymous municipality at the foot of the Ehrenbürg in northern Bavaria. The Renaissance building is a three-winged country house with 4 mid-16th century corner towers and the remains of an enceinte.