Upsilon Andromedae d (υ Andromedae d, abbreviated Upsilon And d, υ And d), formally named Majriti /mædʒˈraɪti/ , is a super-Jupiter exoplanet orbiting within the habitable zone of the Sun-like star Upsilon Andromedae A, approximately 44 light-years (13.5 parsecs, or nearly 4.163×1014 km) away from Earth in the constellation of Andromeda. Its discovery made it the first multiplanetary system to be discovered around a main sequence star, and the first such system known in a multiple star system. The exoplanet was found by using the radial velocity method, where periodic Doppler shifts of spectral lines of the host star suggest an orbiting object.

In July 2014 the International Astronomical Union launched NameExoWorlds, a process for giving proper names to certain exoplanets and their host stars. [3] The process involved public nomination and voting for the new names. [4] In December 2015, the IAU announced the planet would be named "Majriti". [5] The winning name was submitted by the Vega Astronomy Club of Morocco, honoring the 10th-century scientist Maslama al-Majriti. [6]

The star's apparent magnitude, or how bright it appears from Earth's perspective, is 4.09. Therefore, Upsilon Andromedae can be seen with the naked eye.

Upsilon Andromedae d orbits its star nearly every 3.5 years (about 1,276 days) in an eccentric orbit, more eccentric than that of any of the known planets in the Solar System. [10] To explain the planet's orbital eccentricity, some have proposed a close encounter with a now-lost outer planet of Upsilon Andromedae A. The encounter would have moved planet "d" into an eccentric orbit closer to the star and ejected the outer planet. [11] [12]

While Upsilon Andromedae d is likely a gas giant and therefore uninhabitable, it may have a moon or moons that are habitable.

The planet lies in the habitable zone of Upsilon Andromedae A as defined both by the ability for an Earthlike world to retain liquid water at its surface and based on the amount of ultraviolet radiation received from the star. [13]

For a stable orbit, the ratio between a moon's orbital period Ps around its primary and that of the primary (planet) around its star Pp must be < 1/9, e.g. if a planet takes 90 days to orbit its star, the maximum stable orbit for a moon of that planet is less than 10 days. [14] [15] Simulations suggest that a moon with an orbital period less than about 45 to 60 days will remain safely bound to a massive giant planet or brown dwarf that orbits 1 AU from a Sun-like star. [16] In the case of Upsilon Andromedae d, the orbital period would have to be no greater than 120 days (around 4 months) in order to have a stable orbit.

In 1999, astronomers at both San Francisco State University and the Harvard-Smithsonian Center for Astrophysics independently concluded that a three-planet model best fit the data. [17] The two new planets were designated Upsilon Andromedae c and Upsilon Andromedae d.

Preliminary astrometric measurements suggest the orbit of Upsilon Andromedae d may be inclined at 155.5° to the plane of the sky. [18] However, these measurements were later proved useful only for upper limits;, [19] and contradict even the inner planet u And b's inclination of >30°. The mutual inclination between c and d meanwhile is 29.9 degrees. [2] The true inclination of Upsilon Andromedae d was determined as 23.8° after combined results were measured from the Hubble Space Telescope and radial velocity measurements. [2]

When it was discovered, a limitation of the radial velocity method used to detect Upsilon Andromedae d is that the orbital inclination is unknown, and only a lower limit on the planet's mass can be obtained, which was estimated to be about 4.1 times as massive as Jupiter. However, by combining radial velocity measurements from ground-based telescopes with astrometric data from the Hubble Space Telescope, astronomers have determined the orbital inclination as well as the actual mass of the planet, which is about 10.25 times the mass of Jupiter. [2]

Upsilon Andromedae is a binary star located approximately 44 light-years from Earth in the constellation of Andromeda. The system consists of an F-type main-sequence star and a smaller red dwarf. 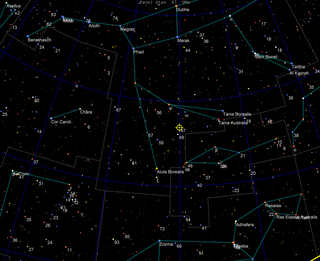 47 Ursae Majoris, formally named Chalawan, is a yellow dwarf star approximately 46 light-years from Earth in the constellation of Ursa Major. As of 2011, three extrasolar planets are believed to orbit the star.

Rho Coronae Borealis is a yellow dwarf star approximately 57 light-years away in the constellation of Corona Borealis. The star is thought to be similar to the Sun with nearly the same mass, radius, and luminosity. It is orbited by two known exoplanets. 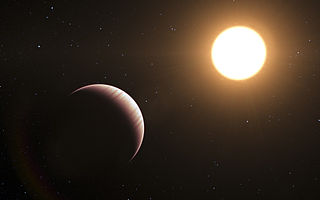 Tau Boötis b, or more precisely Tau Boötis Ab, is an extrasolar planet approximately 51 light-years away. The planet and its host star is one of the planetary systems selected by the International Astronomical Union as part of NameExoWorlds, their public process for giving proper names to exoplanets and their host star. The process involved public nomination and voting for the new names, and the IAU planned to announce the new names in mid-December 2015. However, the IAU annulled the vote as the winning name was judged not to conform with the IAU rules for naming exoplanets.

14 Andromedae, abbreviated 14 And, also named Veritate, is a single, orange-hued giant star situated approximately 247 light-years away in the northern constellation of Andromeda. It is dimly visible to the naked eye with an apparent visual magnitude of 5.22. The star is moving closer to the Earth with a heliocentric radial velocity of −60 km/s. In 2008 an extrasolar planet was discovered to be orbiting the star.

HD 1237 is a binary star system approximately 57 light-years away in the constellation of Hydrus. 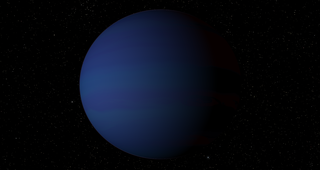 55 Cancri b, occasionally designated 55 Cancri Ab, also named Galileo, is an exoplanet orbiting the Sun-like star 55 Cancri A every 14.65 days. It is the second planet in order of distance from its star, and is an example of a hot Jupiter, or possibly rather "warm Jupiter".

Gliese 876 c is an exoplanet orbiting the red dwarf Gliese 876, taking about 30 days to complete an orbit. The planet was discovered in April 2001 and is the second planet in order of increasing distance from its star.

Gliese 876 b is an exoplanet orbiting the red dwarf Gliese 876. It completes one orbit in approximately 61 days. Discovered in June 1998, Gliese 876 b was the first planet to be discovered orbiting a red dwarf. 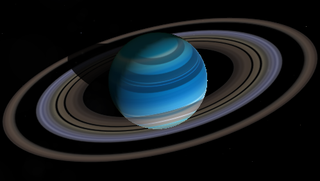 16 Cygni Bb or HD 186427 b is an extrasolar planet approximately 69 light-years away in the constellation of Cygnus. The planet was discovered orbiting the Sun-like star 16 Cygni B, one of two solar-mass (M☉) components of the triple star system 16 Cygni in 1996. It orbits its star once every 799 days and was the first eccentric Jupiter and planet in a double star system to be discovered. The planet is abundant in Lithium. 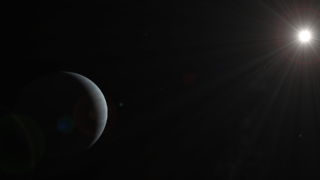 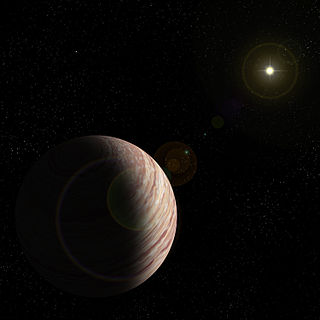 47 Ursae Majoris b, formally named Taphao Thong, is a gas planet and an extrasolar planet approximately 46 light-years from Earth in the constellation of Ursa Major. The planet was discovered located in a long-period orbit around the star 47 Ursae Majoris in January 1996 and as of 2011 it is the innermost of three known planets in its planetary system. It has a mass at least 2.53 times that of Jupiter. 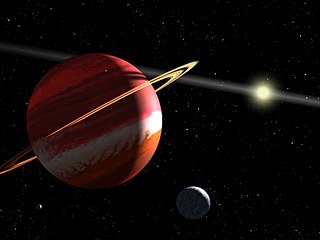 Epsilon Eridani b, also known as Ægir, is an exoplanet approximately 10.5 light-years away orbiting the star Epsilon Eridani, in the constellation of Eridanus. The planet was discovered in 2000, and as of 2019 remains the only confirmed planet in its planetary system. It orbits at around 3.5 AU with a period of around 7.4 years, and has a mass around 1.2 times that of Jupiter.

Gliese 86 is a K-type main-sequence star approximately 35 light-years away in the constellation of Eridanus. It has been confirmed that a white dwarf orbits the primary star. In 1998 the European Southern Observatory announced that an extrasolar planet was orbiting the star.

Gliese 3021 b, also known as GJ 3021 b or HD 1237 b, is an extrasolar planet approximately 57 light-years away, orbiting its bright G-dwarf parent star in the Southern constellation of Hydrus. It was discovered with the Swiss Euler Telescope at the Chilean La Silla Observatory in 2000.

HD 210277 b is an extrasolar planet orbiting the star HD 210277. It was discovered in September 1998 by the California and Carnegie Planet Search team using the highly successful radial velocity method. The planet is at least 24% more massive than Jupiter. The mean distance of the planet from the star is slightly more than Earth's distance from the Sun. However, the orbit is very eccentric, so at periastron this distance is almost halved, and at apastron it is as distant as Mars is from the Sun. 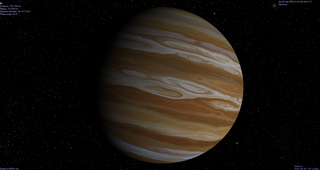 Upsilon Andromedae e is the outermost extrasolar planet orbiting the star Upsilon Andromedae in the constellation of Andromeda. This planet is one of the most Jupiter-like exoplanets found in terms of mass and semi-major axis.

14 Andromedae b, formally named Spe, is an extrasolar planet approximately 249 light years away in the constellation of Andromeda. 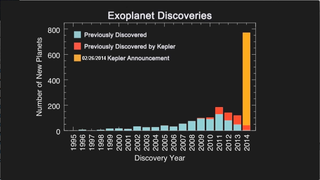 An exoplanet is a planet located outside the Solar System. The first evidence of an exoplanet was noted as early as 1917, but was not recognized as such until 2016. No planet discovery has yet come from that evidence. However, the first scientific detection of an exoplanet began in 1988. Afterwards, the first confirmed detection came in 1992, with the discovery of several terrestrial-mass planets orbiting the pulsar PSR B1257+12. The first confirmation of an exoplanet orbiting a main-sequence star was made in 1995, when a giant planet was found in a four-day orbit around the nearby star 51 Pegasi. Some exoplanets have been imaged directly by telescopes, but the vast majority have been detected through indirect methods, such as the transit method and the radial-velocity method. As of 1 September 2021, there are 4,834 confirmed exoplanets in 3,572 planetary systems, with 795 systems having more than one planet. This is a list of the most notable discoveries.