Upton station may refer to: 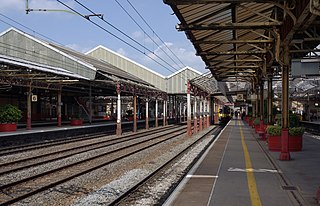 Upton by Chester is a civil parish and a large suburb on the outskirts of Chester, in the Borough of Cheshire West and Chester and the ceremonial county of Cheshire in England. It includes the villages of Upton and Upton Heath. At the 2001 Census the population was recorded as 7,800, rising to 7,956 at the 2011 Census.

Crewe Heritage Centre is a railway museum located in Crewe, England. Managed by the Crewe Heritage Trust, the museum is located between Crewe railway station and Crewe town centre; the site was the location of the 'Old Works' which was demolished in the early 1980s.

Elton is a village and civil parish in the unitary authority of Cheshire West and Chester and the ceremonial county of Cheshire, England. It is situated approximately 13 km (8.1 mi) to the northeast of Chester, between Helsby and Ellesmere Port, near to the River Mersey. Its proximity to the River Mersey and the Manchester Ship Canal have contributed to its industrial character. The village is on the north-western edge of the Cheshire plain, approximately 2.5 km (1.6 mi) from Stanlow Refinery, a Shell facility and the seventh largest oil refinery in Europe. The refinery produces one-sixth of the United Kingdom's petrol.

Helsby railway station serves the village of Helsby in Cheshire, England. It is recorded in the National Heritage List for England as a Grade II listed building.

The Shrewsbury–Chester line, was built in 1846 as the Shrewsbury and Chester Railway. The engineer for the line was Henry Robertson, a partner in locomotive builders Beyer Peacock, while the contractor was Thomas Brassey in partnership with William Mackenzie and Robert Stephenson. 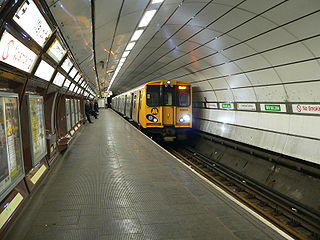 The Wirral line is one of two commuter railway lines operated by Merseyrail and centred on Merseyside, England, the other being the Northern line.

Gobowen railway station is a railway station on the Shrewsbury to Chester Line of the former Great Western Railway's London Paddington to Birkenhead Woodside via Birmingham Snow Hill line, serving the village of Gobowen in Shropshire, England. It is the nearest station to the town of Oswestry.

Chester railway station in Newtown, north-east of Chester city centre, England, is operated by Transport for Wales. Services operated by TfW, Avanti West Coast, Merseyrail and Northern use the station. From 1875 to 1969 the station was known as Chester General to distinguish it from Chester Northgate. The station's Italianate frontage was designed by the architect Francis Thompson.

The Bache is a small civil parish and suburb of Chester, Cheshire, England.

Capenhurst railway station serves the village of Capenhurst and its substantial industrial facilities, in Cheshire, England. It also serves outer suburbs of Ellesmere Port. On the former GWR main line from London Paddington to Birkenhead Woodside it is now on the Wirral Line of the Merseyrail network, 5 1⁄4 miles (8.4 km) north of Chester. 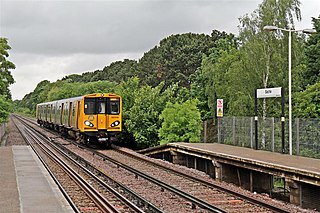 Bache railway station serves the Bache area of Upton in the north of the city of Chester, England. It is the first station for Merseyrail services leaving Chester on the Wirral Line. Passengers can alight here for the Countess of Chester Hospital which is close by, and regular bus services to Chester Zoo.

Spital railway station, on the former main line from Birkenhead Woodside to London Paddington, is situated near Bebington on the Wirral Peninsula, England in the small suburb of Spital. The station is located on the Wirral Line operated by Merseyrail and there are frequent third rail electric train services to Liverpool, Chester and Ellesmere Port.

Frodsham railway station serves the town of Frodsham, Cheshire, England. The station is managed by Transport for Wales. It was opened along with the line in 1850 and the station building is recorded in the National Heritage List for England as a designated Grade II listed building. This was restored in 2012 and is in private ownership. 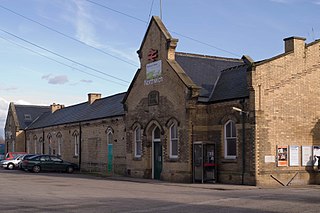 Northwich railway station serves the town of Northwich in Cheshire, England. The station has two platforms and is located on the Mid-Cheshire line 28 1⁄4 miles (45.5 km) southwest of Manchester Piccadilly.

Navigation Road is a station that serves both Northern Trains and Manchester Metrolink located in the east of Altrincham, in Greater Manchester, England. It consists of a Northern-operated heavy rail station on the Mid-Cheshire Line, and an adjoining light rail stop on the Altrincham Line of Greater Manchester's Metrolink network. The original heavy rail element of the station was opened by the Manchester, South Junction and Altrincham Railway in 1931, and the Metrolink element opened in 1992. A level crossing operates at the southern end of the station.

Chester Road railway station is a railway station serving the Pype Hayes, Erdington, Wylde Green and Boldmere areas of north-east Birmingham, in the West Midlands county of England. It is situated on the Redditch-Birmingham New Street-Lichfield Cross-City Line.

Upton-by-Chester is a former station situated on the northern part of the GWR's former main line from London Paddington to Birkenhead Woodside which is now Merseyrail's Wirral Line between Chester General and Liverpool Central. It was located by the Liverpool Road road bridge where it crossed the railway near Upton and not far from Moston.