Ura Gewog (Dzongkha : ཨུ་ར་རྒེད་འོག) is a gewog (village block) of Bumthang District, Bhutan. [1] Ura Gewog consists of ten major villages- Tangsibi, Shingnyeer, Shingkhar, Pangkhar, Somthrang, Beteng, Trabi, Tarshong, Toepa and Chari with total household of 301 and population of 2288, covering an area of around 265 sq. kilometer with some 82% of forest coverage. The Gewog is located in the southeastern part of Bumthang District, 48 km distance from Dzongkhag Offices. It is bordered by Chhokhor and Chhumig gewog to the west, Tang gewog to the north, Zhemgang and Mongar District to the south and Lhuentse District to the east. The altitude of the gewog is around 3100 meters above sea level. [2] 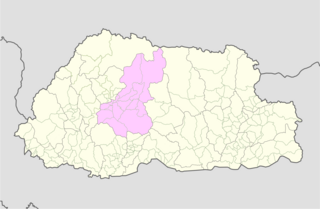 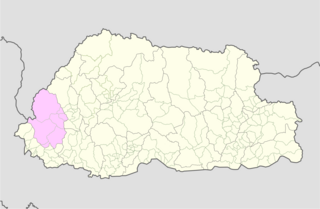 Haa District is one of the 20 dzongkhag or districts comprising Bhutan. Per the 2017 census, the population of Haa dzongkhag was 13,655 in 2,952 households making it the second least populated dzongkhag in Bhutan after Gasa. The dominant language of the district is Dzongkha, the national language. 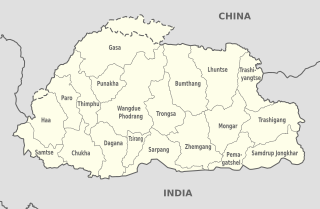 The Kingdom of Bhutan is divided into 20 districts. Bhutan is located between the Tibet Autonomous Region of China and India on the eastern slopes of the Himalayas in South Asia.

Bumthang District is one of the 20 dzongkhag (districts) comprising Bhutan. It is the most historic dzongkhag if the number of ancient temples and sacred sites is counted. Bumthang consists of the four mountain valleys of Ura, Chumey, Tang and Choekhor ("Bumthang"), although occasionally the entire district is referred to as Bumthang Valley. 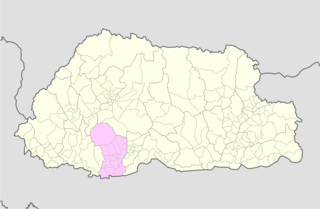 Dagana District is a district located in Bhutan. Most of the district is populated by Dzongkha speakers. However, in the southwest part near the Sarpang District, Nepali is also spoken as a native language. 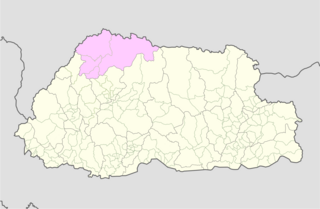 Gasa District or Gasa Dzongkhag is one of the 20 dzongkhags (districts) comprising Bhutan. The capital of Gasa District is Gasa Dzong near Gasa. It is located in the far north of the county and spans the Middle and High regions of the Tibetan Himalayas. The dominant language of the district is Dzongkha, which is the national language. Related languages, Layakha and Lunanakha, are spoken by semi-nomadic communities in the north of the district. The People's Republic of China claims the northern part of Gasa District.

Pemagatshel District is one of the 20 dzongkhags (districts) constituting Bhutan. 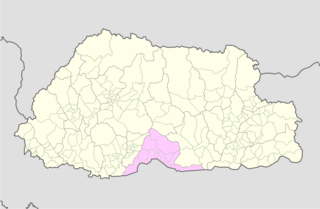 Sarpang District is one of the 20 dzongkhags (districts) comprising Bhutan.

Tsirang District (Dzongkha: རྩི་རང་རྫོང་ཁག་; Wylie: Rtsi-rang rdzong-khag; previously, is one of the 20 dzongkhags of Bhutan. The administrative center of the district is Damphu. 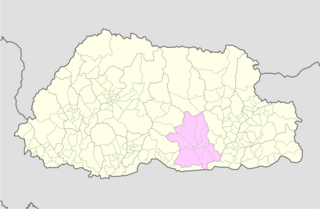 Zhemgang District, is one of the 20 dzongkhags (districts) comprising Bhutan. It is bordered by Sarpang, Trongsa, Bumthang, Mongar and Samdrup Jongkhar Districts, and borders Assam in India to the south. Administrative center of the district is Zhemgang. 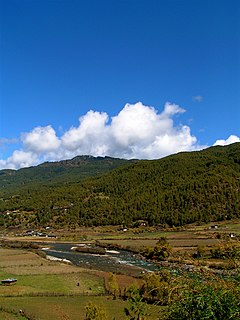 Bumthang Valley is the main inhabited valley in the Bumthang district of Bhutan. 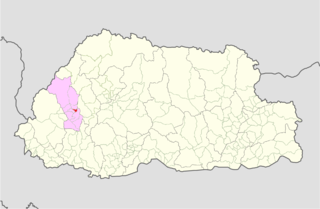 Hungrel Gewog is a gewog of Paro District, Bhutan. In 2002, the gewog had an area of 3.6 square kilometres and contained 17 villages and 247 households.

Biru Gewog is a former gewog of Samtse District, Bhutan. The gewog has an area of 49.04 square kilometres and contains 15 chewogs with 46 villages and 448 households. Biru Gewog comprises part of Sipsu Dungkhag (sub-district), together with Tendu, Bara, Lehereni, and Sipsu Gewogs.

Shumar Gewog is a gewog in Pemagatshel District, Bhutan.

Barshong Gewog is a gewog of Tsirang District, Bhutan. 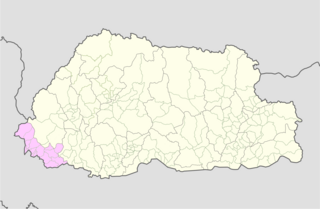 Tashicholing Gewog is a gewog of Samtse District, Bhutan.The name of the gewog is also spelled as Tashichholing and formerly known as Sipsu Gewog or Sibsoo.

Thrumshing La, also called Thrumshingla Pass and Donga Pass,, is the second-highest mountain pass in Bhutan, connecting its central and eastern regions across the otherwise impregnable Donga range that has separated populations for centuries. It is located on a bend of the Lateral Road at the border of Bumthang District and Mongar District, along the border with Lhuntse District to the east. The Lateral Road bisects Thrumshingla National Park, named after the pass. The World Wildlife Fund also maintains operations in the park.