Last updated April 14, 2021
Celestial nymph in Hinduism
"Urvasi" redirects here. For the song, see Kadhalan (soundtrack).
This article is about character in a Hindu legend. For other uses, see Urvashi (disambiguation).

Urvashi (Sanskrit : उर्वशी, romanized: Urvaśī) is an apsara in Hindu legends. She was a celestial maiden in Indra's court and was considered the most beautiful of all the Apsaras. She is perennially youthful and infinitely charming but always elusive. [1] She is a source as much of delight as of dolour. [2]

The 'Urvashi' means she who controls hearts. It is derived from two words — "Ur", meaning heart and "vash" meaning to control. Monier Monier-Williams proposes a different etymology in which the name means 'widely pervasive' and suggests that in its first appearances in Vedic texts it is a name for the dawn goddess. [3]

The Devi Bhagavatam narrates the story of Urvashi. Once the revered sages Nara-narayana were meditating in the holy shrine of Badrinath Temple situated in the Himalayas. Indra, the king of the Gods, did not want the sage to acquire divine powers through meditation and sent two apsaras to distract him. The sage struck his thigh and created a woman so beautiful that Indra’s apsaras were left matchless. This was Urvaśī, named from ur, the Sanskrit word for thigh. After his meditation was completed, the sage gifted Urvaśī to Indra, and she occupied the place of pride in Indra’s court. [4] [5] [6] [7]

Urvashi in the Ramayana, seduced Vibhandaka and became the mother of Rishyasringa, who later played crucial role in birth of Rama and was married to Shanta, the elder sister of Rama. [8]

Once Urvashi and Pururavas, founder of the lunar dynasty, fell in love with each other. Pururavas asked her to become his wife, but she agreed on three or two conditions. The most retold conditions are that Pururavas would protect Urvashi's pet sheep and they would never see one another naked (apart from lovemaking). [9]

Pururavas agreed with the conditions and they lived happily. Indra started missing Urvashi and he created circumstances where the conditions were broken. First, he sent some Gandharvas to kidnap the sheep, when the couple was making love. When Urvashi heard her pets' cries, she scolded Pururavas for not keeping his promise. Hearing her harsh words, Pururavas forgot that he was naked and ran after the sheep. Just then, Indra flashed lightings and Urvashi saw her husband naked. After the events, Urvashi returned to heaven and left Pururavas heartbroken. Urvashi used to come on earth and bore Pururavas many children, but they were not completely reunited.

Their love story is found in the Rigveda [10] and Shatapatha Brahmana too. Kalidasa's drama Vikramōrvaśīyam is about their love story with variations from the original texts. [11]

She is also mentioned in the Mahabharata, as the celestial dancer of Indra's palace. When Arjuna had come for obtaining weapons from his father Indra, his eyes fell upon Urvaśī. Indra seeing this sent Chitrasena to address Urvasi to wait upon Arjuna. Hearing the virtues of Arjuna, Urvasi was filled with desire. At twilight, she reached Arjuna's abode. As soon as Arjuna saw that beauty at night in her room in beautiful attire, from fear, respect, modesty, and shyness he saluted her with closed eyes. She told Arjuna everything and also of her heart desire. But Arjuna refused, as considering her to his superior of old, and said that she was like his mother because of her past marriage to Pururavas. In wrath, she cursed Arjuna for destitute of manhood and scorned as a eunuch for a year. This curse helped Arjuna during his Agyatvās. [12]

An apsara, also spelled as apsaras, is a type of female spirit of the clouds and waters in Hindu and Buddhist culture. They figure prominently in the sculpture, dance, literature and painting of many South Asian and Southeast Asian cultures. There are two types of apsaras: laukika (worldly) and daivika (divine). Urvasi, Menaka, Rambha, Tilottama and Ghritachi are the most famous among them.

Agastya(Pali: Akkhata) was a revered Indian sage of Hinduism. In the Indian tradition, he is a noted recluse and an influential scholar in diverse languages of the Indian subcontinent. He and his wife Lopamudra are the celebrated authors of hymns 1.165 to 1.191 in the Sanskrit text Rigveda and other Vedic literature. 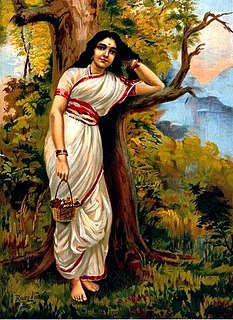 In Hinduism, Ahalya also known as Ahilya, is the wife of the sage Gautama Maharishi. Many Hindu scriptures say that she was seduced by Indra, cursed by her husband for infidelity, and liberated from the curse by Rama. 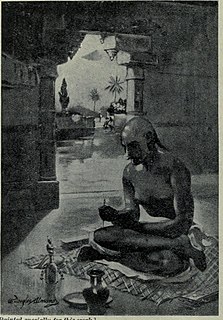 Kālidāsa was a Classical Sanskrit author who is often considered ancient India's greatest playwright and dramatist. His plays and poetry are primarily based on the Vedas, the Rāmāyaṇa, the Mahābhārata and the Purāṇas. His surviving works consist of three plays, two epic poems and two shorter poems.

Kamadhenu, also identified with Surabhi, is a divine bovine-goddess described in Hinduism as Gou Mata, the mother of all cows. She is a miraculous "cow of plenty" who provides her owner whatever he desires and is often portrayed as the mother of other cattle. In iconography, she is generally depicted as a white cow with a female head and breasts, the wings of a bird, and the tail of a peafowl or as a white cow containing various deities within her body. All cows are venerated in Hinduism as the earthly embodiment of the Kamadhenu. As such, Kamadhenu is not worshipped independently as a goddess, and temples are not dedicated to her honor alone; rather, she is honored by the veneration of cows in general throughout the observant Hindu population.

In Hindu mythology, Aja was the 68th king in the Solar Dynasty, descent from the sun god Surya. He was the son of king Raghu, one of the most famous kings of the Ikshvaku dynasty. His paternal grandfather was the pious king Dileepa. He ruled the kingdom of Kosala on the southern banks of the river Sarayu, with Ayodhya as his capital. His wife Indumati, was the princess of Vidarbha and his son was Dasharatha, father of Rama, an avatar of Vishnu.

In Hindu mythology, Durvasa also known as Durvasas, was a legendary Rishi and the son of Anasuya and Atri. He was a great devotee of Lord Shiva and goddess Parvati. Known for his short temper, wherever he went, he was received with great reverence from humans and devas alike. 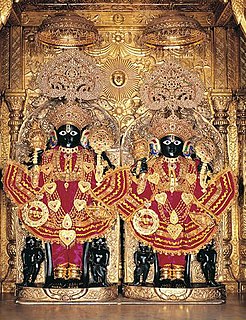 Nara-Narayana is a Hindu deity pair. Nara-Narayana is the twin-brother avatar of the God Vishnu on Earth, working for the preservation of Dharma or righteousness. Nara and Narayana are two bodies, one soul.They are Avyaktha Vishnu Bhagawan's Vyakta Roopa.

Abhijnanashakuntalam, also known as Shakuntala, The Recognition of Shakuntala, The Sign of Shakuntala, and many other variants, is a Sanskrit play by the ancient Indian poet Kālidāsa, dramatizing the story of Śakuntalā told in the epic Mahābhārata and regarded as best of Kālidāsa's works. Its exact date is uncertain, but Kālidāsa is often placed in the 4th century AD. 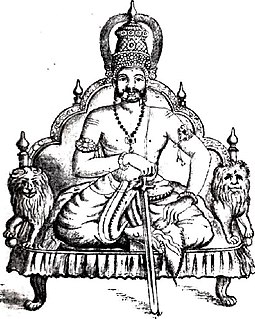 According to Hinduism, Yayāti was a Hindu kshatriya king. He was one of the ancestors of Pandavas and Yaduvanshis. He was the son of King Nahusha and his wife Ashokasundari, daughter of Shiva and Parvati, however, early sources state that Virajas, daughter of the Pitris, was the mother of Yayati. He had five brothers: Yati, Samyati, Ayati, Viyati and Kriti. Yayāti had conquered the whole world and was the Chakravartin Samrat. He married Devayani and took Sharmishtha, daughter of king Vrishparva and maid of Devayani to his empire. Devayani was the daughter of Shukracharya, the priest of the Asuras. Later he copulates with Sharmistha. After hearing of his relationship with Sharmishtha, Devayani complains to her father Shukracharya, who in turn curses Yayāti to old age in the prime of life, but later allows him to exchange it with his son, Puru. His story finds mention in the Mahabharata-Adi Parva, in the Bhagavata Purana & also in the Matsya Purana. 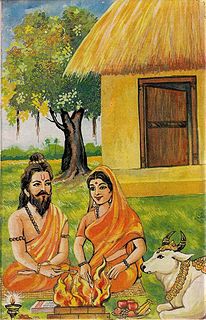 Vasishtha is one of the oldest and most revered Vedic rishis or sages. He is one of the Saptarishis of India. Vashistha is credited as the chief author of Mandala 7 of the Rigveda. Vashishtha and his family are mentioned in Rigvedic verse 10.167.4, other Rigvedic mandalas and in many Vedic texts. His ideas have been influential and he was called the first sage of the Vedanta school of Hindu philosophy by Adi Shankara.

Pururavas was the first king of the Aila dynasty or the chandravamsha. According to the Vedas, he is a legendary entity associated with Surya and Usha, and is believed to reside in the middle region of the cosmos. The Rig Veda (X.95.18) states that he was a son of Ilā and was a pious ruler. However, the Mahabharata states that Ila was both his mother and his father. According to the Vishnu Purana, his father was Budha, and he was ancestor of the tribe of Pururavas, from whom descended the Kauravas and Pandavas of Mahābhārata.

Vikramōrvaśīyam is a five-act Sanskrit play by ancient Indian poet Kalidasa, who lived in the 4th or 5th Century CE, on the Vedic love story of King Pururavas and an Apsara named Urvashi, known for her beauty.

Shachi also known as Indrani and Poulomi is the Hindu goddess associated with beauty, sensuality, jealousy and rage. She is the daughter of the demonic figure (Asura) Puloman and the spouse of Indra, the king of Devas. She is also the mother of various deities like Jayanta, Jayanti and Devasena. Vedic texts mention her as a proud and boastful beauty. In Hinduism, Shachi, even though from a father of demonish origin, is seen as a chaste and devoted wife. The Vana Parva, also known as the "Book of the Forest", is the third of eighteen parvas in the Indian epic Mahabharata. Aranya Parva traditionally has 21 sub-books and 324 chapters. The critical edition of Aranya Parva is the longest of the 18 books in the epic, containing 16 sub-books and 299 chapters. 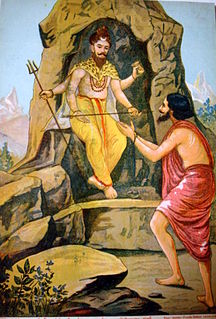 Kirātārjunīya is an epic poem by Bhāravi, considered to be the most powerful poem in Sanskrit. Believed to have been composed in the 6th century or earlier, it consists of eighteen cantos describing the combat between Arjuna and Lord Shiva at Indrakeeladri Hills in present-day Vijayawada. Along with the Naiṣadhacarita and the Shishupala Vadha, it is one of the larger three of the six Sanskrit mahakavyas, or great epics. It is noted among Sanskrit critics both for its gravity or depth of meaning, and for its forceful and sometimes playful expression. This includes a canto set aside for demonstrating linguistic feats, similar to constrained writing. Later works of epic poetry followed the model of the Kirātārjunīya.

In Hindu mythology, Tumburu, also known as Tumbaru (तुम्बरु) and Tumbara (तुम्बर) is the best among Gandharvas or celestial musician and is sometimes described as the best of singers. He is described to perform in the courts of gods Kubera and Indra as well as sing praises of god Vishnu. He leads the Gandharvas in their singing.

Panchakanya is a group of five iconic ladies of Hindu epics, extolled in a hymn and whose names are believed to dispel sin when recited. They are Ahalya, Draupadi, Kunti or Sita, Tara, and Mandodari. While Draupadi and Kunti are from Mahabharata, Ahalya, Sita, Tara and Mandodari are from the epic Ramayana.

In Hindu mythology, Jayanta, is the son of Indra, the king of the gods (devas) and his mother Shachi (Indrani). He resides in Svarga, the Hindu heaven, governed by Indra. He has a sister called Jayanti. He appears in various Hindu scriptures as fighting wars on behalf of the gods and his father. Jayanta also appears in the epic Ramayana and other lore, in which he disguises himself as a crow.