Last updated May 22, 2020
For other places with the same name, see Vânători.
Commune in Mureș, Romania 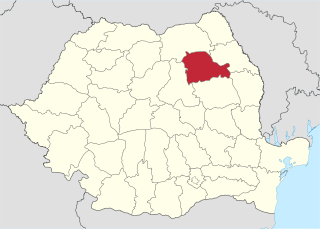 The Vânători-Neamț Natural Park is situated in north-east Romania, in Neamţ County. It is one of the few places where the European bison can be seen.

Ciucea is a commune of Cluj County, Romania, situated 20 km northwest of Huedin on the right bank of the Crişul Repede River. It is composed of two villages, Ciucea and Vânători (Börvény). It also included three other villages from 1968 to 2002, when these were split off to form Negreni Commune.

The Vânători de Munte are the elite mountain troops of the Romanian Land Forces. They were first established as an independent Army Corps in 1916 during World War I, and became operational in 1917 under Corpul de Munte designation.

The Cracăul Alb is a river in the Vânători-Neamț Natural Park in Neamț County, Romania. At its confluence with the Cracăul Negru in Magazia, the river Cracău is formed. Its length is 15 km (9.3 mi) and its basin size is 77 km2 (30 sq mi).

The Neamț or Ozana is a right tributary of the river Moldova in Romania. It discharges into the Moldova near Timișești. It flows through the villages Boboiești, Pipirig, Pâțâligeni, Stânca, Leghin, Lunca, Vânători-Neamț, Dumbrava, Timișești and the town Târgu Neamț. Its length is 59 km (37 mi), and its basin area is 410 km2 (160 sq mi).

The Nemțișor is a left tributary of the river Neamț (Ozana) in Romania. It discharges into the Neamț in Vânători-Neamț. Its length is 25 km (16 mi) and its basin size is 88 km2 (34 sq mi).

The Bouleț is a right tributary of the river Cracăul Alb in Romania. It starts at the confluence of headwaters Boulețul Mare and Boulețul Mic. It flows into the Cracăul Alb in Mitocu Bălan. Its length is 8 km (5.0 mi) and its basin size is 30 km2 (12 sq mi).

Lisa is a commune in Teleorman County, Romania. It is composed of two villages, Lisa and Vânători.

Mișca is a commune in Arad County, Romania, in the northern part of the Crișurilor Plateau, in the Teuz valley. Its surface is 1088 ha. 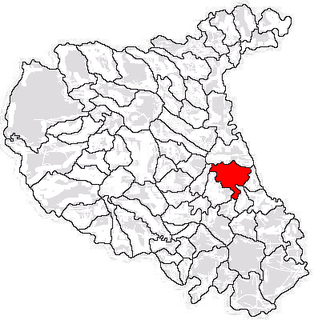 Vânători is a commune in Galați County, Romania with a population of 4,172 people. It is composed of three villages: Costi, Odaia Manolache and Vânători.

Vânători is a commune located in Mehedinți County, Romania. It is composed of two villages: Roșiori and Vânători. It also included Braniștea and Goanța villages until 2004, when they were split off to form Braniștea Commune.

Vânători-Neamț is a commune in Neamț County, Romania. It is composed of four villages: Lunca, Mânăstirea Neamț, Nemțișor and Vânători-Neamț.

The Second Battle of Oituz was a confrontation between Romanian and, to a lesser extent, Russian forces on one side and German and Austro-Hungarian forces on the other, during the Romanian Campaign of World War I. The battle took place primarily in the Oituz valley on the border of Hungary and Romania, between August 8 and August 20, 1917.

Traian Moşoiu was a Romanian general during World War I, Minister of War in the Alexandru Vaida-Voevod cabinet, Minister of Communications and of Industry and Commerce in the Ion I. C. Brătianu cabinet.

Liga IV Galați is the regional Liga IV football division for clubs in Galați County, România, the fourth tier of the Romanian football league system. It is organized by the County Football Association and is competed amongst 14 teams, the winner is promoted to Liga III after a promotion play-off.