They were designed for a low axle load of just 10.7 tonnes (10.5 long tons; 11.8 short tons). This allowed them to operate on lightly laid secondary lines, but during their many years of service, up to the end of the steam era, they were also widely used on main lines hauling slow passenger trains that made frequent stops.

They were affectionately called "Pikku-Jumbo" (The Little Jumbo) because of their good performance despite their low weight. They had a low fuel consumption (usually Tk3s used birch wood) and good riding characteristics. They also had good steaming characteristics and were very popular among locomotive crews.

The livery of Tk3 was the same as other VR steam locomotives: dark locomotive green with a black smokebox. When new some locos were lined with thin gold decoration. The gold decorations were not repainted during maintenance, so they were seldom seen.

The following are preserved 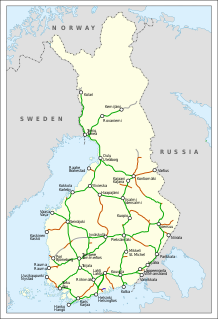 The Finnish railway network consists of a total track length of 9,216 km (5,727 mi) of railways built with 1,520 mm Russian gauge track having electrified track length of 3,249 km (2,019 mi) electrified track length. Passenger trains are operated by the state-owned VR which covers track length of 7,225 km (4,489 mi). They serve all the major cities and many rural areas, though railway connections are available to fewer places than bus connections. Most passenger train services originate or terminate at Helsinki Central railway station, and a large proportion of the passenger rail network radiates out of Helsinki. VR also operates freight services. Maintenance and construction of the railway network itself is the responsibility of the Finnish Rail Administration, which is a part of the Finnish Transport Agency. The network is divided in six areal centres, that manage the use and maintenance of the routes in co-operation. Cargo yards and large stations may have their own signalling systems. 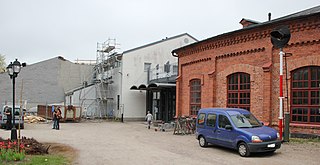 Jyväskylä Central Station, also known as Jyväskylä Travel Center is a transportation hub located in the city of Jyväskylä, Finland. The station is the city's main train station as well its main long-distance bus terminal.

The Soviet locomotive class IS was a Soviet passenger steam locomotive type named after Joseph Stalin. The contract design was prepared in 1929 at V.V. Kuybyshev Locomotive Factory in Kolomna. The IS series locomotives were manufactured between 1932 and 1942. 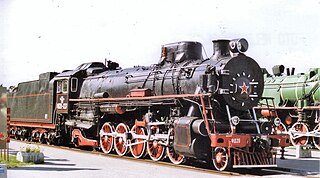 DT1 multiple unit is a train developed at the Torzhoksky car-building factory in Russia in 2007. The train has electric and diesel draught, and is intended for maintenance of suburban transportation on railways of a track of 1,520 mm with low and high passenger platforms in macroclimatic areas with a temperate climate.

The Russian locomotive class Ye, and subclasses Yea, Yek, Yel, Yef, Yem, Yemv and Yes were a series of 2-10-0 locomotives built by American builders for the Russian railways in World War I and again in World War II. They were lightweight engines with relatively low axle loadings. 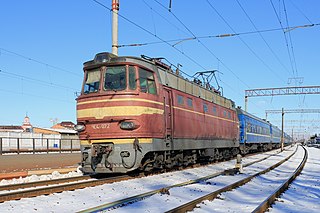 The ChS4 is an electric mainline AC passenger locomotive used in Russia, Belarus, and Ukraine.

The ChS2 Russian: ЧС2 is an electric mainline DC passenger locomotive used in Russia and Ukraine. It was manufactured by the Škoda Works in Czechoslovakia between 1958 and 1973. 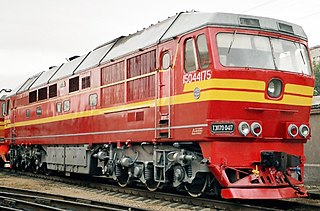 The Russian Railway Museum is situated next to Baltiysky railway station in Saint Petersburg. The museum was established in 1978, its current site and exhibition opened to public on 1 November 2017. The museum utilizes the nineteenth century locomotive shed of the Peterhof Railway built in 1857–1858, however a large second exhibition building and open exhibition areas have been added.