The Variety is a handheld game console that was developed and manufactured by VTech and released in 1983.

VTech is a Hong Kong-based global supplier of electronic learning products from infancy to preschool and the world's largest manufacturer of cordless phones. It is also one of the top 50 electronic manufacturing services providers globally.

The cartridges contained the LCD and processor for the games, and were inserted from the back of the unit through a door that slid to unlock and hinged open. Only 6 games are known to exist for the system. [1]

Cranium is a party game created by Whit Alexander and Richard Tait in 1998, after Richard spent a weekend playing games with another family and recognized the need for a game involving a variety of skills. Richard left his job at Microsoft, convincing his friend and co-worker Whit Alexander to join him in the creation of Cranium. Cranium, manufactured by Hasbro subsidiary Cranium, Inc., is billed as "The Game for Your Whole Brain". Unlike many other party games, Cranium includes a wide variety of activities. Giorgio Davanzo handles packaging and branding for the game, and the artwork is by cartoonist Gary Baseman. 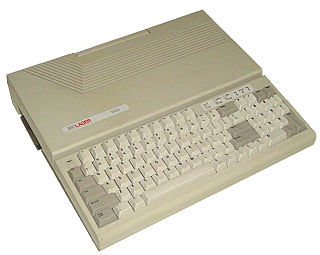 The Laser 128 is a clone of the Apple II series of personal computers, released by VTech in 1984.

The Video Technology CreatiVision is a hybrid computer and home video game console introduced by VTech in 1981 and released in 1982. The hybrid unit was similar in concept to computers such as the APF Imagination Machine, the older VideoBrain Family Computer, and to a lesser extent the Intellivision game console and Coleco Adam computer, all of which anticipated the trend of video game consoles becoming more like low-end computers. 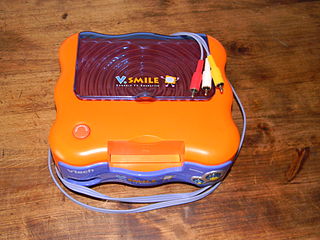 The V.Smile is a sixth-generation educational home video game console manufactured and released by VTech. It is designed for children ages 3 to 7, but offers software designed for several age groups between 3-9. Titles are available on ROM cartridges called "Smartridges", to play off the system's educational nature. The graphics are primarily sprite-based. The console is often sold bundled with a particular game. With most of them having a game called "Alphabet Park Adventure." Several variants of the V.Smile console are sold including handheld versions, or models with added functionality such as touch tablet integrated controllers or microphones. The V-Motion is a major variant with its own software lineup that includes motion sensitive controllers and has Smartriges designed to take advantage of motion-related "active learning". The V-Motion and Smartridges however are fully backwards compatible with other V.Smile variants and V.Smile Smartridges, and a V-Motion Smartridge can also be played on V.Smile console or handheld, albeit with limited functionality. However, in 2010, V.Smile NEW and OLD were discontinued. VTech still made games for V.Smile Pocket and V.Motion.

Philips Consumer Communications, L.P. was a $2.5 billion joint venture of Lucent Technologies and Royal Philips Electronics formed on October 7, 1997. Philips owned 60% of the joint venture, with Lucent owning the other 40%. PCC was a global venture, with branches in more than 100 countries, including the US, Latin America, Asia-Pacific and Europe. Analysts predicted PCC would become one of the major players in the consumer communications business.

The VTech Socrates is an educational home video game console manufactured and released in 1988 by VTech. The console features a robot character Socrates, named after the philosopher. The character is visually similar to Johnny Five from the Short Circuit movies. It was discontinued in the early 1990s.

The VTech PreComputer 2000 is an electronic learning aid manufactured by VTech. It contains a dot matrix LCD, standard size keyboard, 33 activities for teaching in 4 different levels for 1 or 2 players and introductory computer programming with the BASIC programming language. It has an 80,000 word spell checker and a SAT word builder. It can be powered by battery or AC adapter. It is the successor to the VTech PreComputer 1000 model. 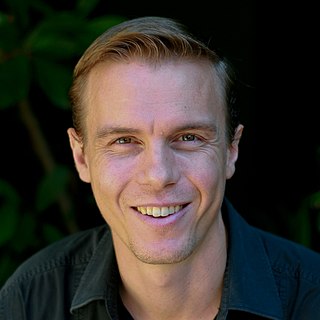 Troy Hunt is an Australian web security expert known for public education and outreach on security topics. He created Have I Been Pwned?, a data breach search website that allows non-technical users to see if their personal information has been compromised. He has also authored several popular security-related courses on Pluralsight, and regularly presents keynotes and workshops on security topics. He also is the creator of ASafaWeb, a tool that performs automated security analysis on ASP.NET websites. Starting in 2011, Hunt was named a Microsoft Most Valuable Professional (MVP) in Developer Security, and was recognized as a Microsoft MVP of the Year in 2011. He was also named a Microsoft Regional Director in 2016.

The LeapFrog Epic is an Android-based mini-tablet computer produced and marketed by LeapFrog Enterprises. Released in 2015, the Epic is LeapFrog's first device to run on Android; most of LeapFrog's mobile computing devices for children run on a customized Ångström Linux distribution.

The 3D Gamate, is a handheld video game console developed and manufactured by VTech, released in 1983.