Vaisheshika or Vaiśeṣika (Sanskrit : वैशेषिक) is one of the six schools of Indian philosophy (Vedic systems) from ancient India. In its early stages, the Vaiśeṣika was an independent philosophy with its own metaphysics, epistemology, logic, ethics, and soteriology. [1] Over time, the Vaiśeṣika system became similar in its philosophical procedures, ethical conclusions and soteriology to the Nyāya school of Hinduism, but retained its difference in epistemology and metaphysics.

Vaisheshika school is known for its insights in naturalism. [4] [5] It is a form of atomism in natural philosophy. [6] It postulated that all objects in the physical universe are reducible to paramāṇu (atoms), and one's experiences are derived from the interplay of substance (a function of atoms, their number and their spatial arrangements), quality, activity, commonness, particularity and inherence. [7] Everything was composed of atoms, qualities emerged from aggregates of atoms, but the aggregation and nature of these atoms was predetermined by cosmic forces. Ajivika metaphysics included a theory of atoms which was later adapted in Vaiśeṣika school. [8]

According to Vaiśeṣika school, knowledge and liberation were achievable by a complete understanding of the world of experience. [7] .

The epistemology of Vaiśeṣika school of Hinduism accepted only two reliable means to knowledge – perception and inference. [2]

Vaisheshika espouses a form of atomism, that the reality is composed of five substances (examples are earth, water, air, fire, and space). Each of these five are of two types, explains Ganeri, [6] (paramāṇu) and composite. A paramāṇu is that which is indestructible, indivisible, and has a special kind of dimension, called “small” (aṇu). A composite is that which is divisible into paramāṇu. Whatever human beings perceive is composite, and even the smallest perceptible thing, namely, a fleck of dust, has parts, which are therefore invisible. [6] The Vaiśeṣikas visualized the smallest composite thing as a “triad” (tryaṇuka) with three parts, each part with a “dyad” (dyaṇuka). Vaiśeṣikas believed that a dyad has two parts, each of which is an atom. Size, form, truths and everything that human beings experience as a whole is a function of parmanus, their number and their spatial arrangements.

Vaisheshika postulated that what one experiences is derived from dravya (substance: a function of atoms, their number and their spatial arrangements), guna (quality), karma (activity), samanya (commonness), vishesha (particularity) and nsamavaya (inherence, inseparable connectedness of everything). [7] [12]

The syllogism of the Vaiśeṣika school was similar to that of the Nyāya school of Hinduism, but the names given by Praśastapāda to the 5 members of syllogism are different. [26]

The earliest systematic exposition of the Vaisheshika is found in the Vaiśeṣika Sūtra of Kaṇāda (or Kaṇabhaksha). This treatise is divided into ten books. The two commentaries on the Vaiśeṣika Sūtra, Rāvaṇabhāṣya and Bhāradvājavṛtti are no more extant. Praśastapāda’s Padārthadharmasaṁgraha (c. 4th century) is the next important work of this school. Though commonly known as bhāṣya of Vaiśeṣika Sūtra, this treatise is basically an independent work on the subject. The next Vaisheshika treatise, Candra’s Daśapadārthaśāstra (648) based on Praśastapāda’s treatise is available only in Chinese translation. The earliest commentary available on Praśastapāda’s treatise is Vyomaśiva’s Vyomavatī (8th century). The other three commentaries are Śridhara’s Nyāyakandalī (991), Udayana’s Kiranāvali (10th century) and Śrivatsa’s Līlāvatī (11th century). Śivāditya’s Saptapadārthī which also belongs to the same period, presents the Nyāya and the Vaiśeṣika principles as a part of one whole. Śaṁkara Miśra’s Upaskāra on Vaiśeṣika Sūtra is also an important work. [27]

The Categories or Padārtha

According to the Vaisheshika school, all things that exist, that can be cognized and named are padārtha s (literal meaning: the meaning of a word), the objects of experience. All objects of experience can be classified into six categories, dravya (substance), guṇa (quality), karma (activity), sāmānya (generality), viśeṣa (particularity) and samavāya (inherence). Later Vaiśeṣikas (Śrīdhara and Udayana and Śivāditya) added one more category abhava (non-existence). The first three categories are defined as artha (which can perceived) and they have real objective existence. The last three categories are defined as budhyapekṣam (product of intellectual discrimination) and they are logical categories. [28]

According to the Vaiśeṣika school, the trasareṇu are the smallest mahat (perceivable) particles and defined as tryaṇukas (triads). These are made of three parts, each of which are defined as dvyaṇuka (dyad). The dvyaṇukas are conceived as made of two parts, each of which are defined as paramāṇu (atom). The paramāṇus (atoms) are indivisible and eternal, they can neither be created nor destroyed. [35] Each paramāṇu (atom) possesses its own distinct viśeṣa (individuality). [36]

The measure of the partless atoms is known as parimaṇḍala parimāṇa. It is eternal and it cannot generate the measure of any other substance. Its measure is its own absolutely. [37]

The early Vaiśeṣika texts presented the following syllogism to prove that all objects i.e. the four bhūtas, pṛthvī (earth), ap (water), tejas (fire) and vāyu (air) are made of indivisible paramāṇus (atoms): Assume that the matter is not made of indivisible atoms, and that it is continuous. Take a stone. One can divide this up into infinitely many pieces (since matter is continuous). Now, the Himalayan mountain range also has infinitely many pieces, so one may build another Himalayan mountain range with the infinite number of pieces that one has. One begins with a stone and ends up with the Himalayas, which is a paradox - so the original assumption that matter is continuous must be wrong, and so all objects must be made up of a finite number of paramāṇus (atoms).

Sutra in Indian literary traditions refers to an aphorism or a collection of aphorisms in the form of a manual or, more broadly, a condensed manual or text. Sutras are a genre of ancient and medieval Indian texts found in Hinduism, Buddhism and Jainism.

Nyāya, literally means "rules", "method" or "judgment". It is also the name of one of the six orthodox (astika) schools of Hinduism. This school's most significant contributions to Indian philosophy was systematic development of the theory of logic, methodology, and its treatises on epistemology.

Samkhya is one of the six āstika schools of Hindu philosophy. It is most related to the Yoga school of Hinduism, and it was influential on other schools of Indian philosophy. Sāmkhya is an enumerationist philosophy whose epistemology accepts three of six pramanas (proofs) as the only reliable means of gaining knowledge. These include pratyakṣa (perception), anumāṇa (inference) and śabda. Sometimes described as one of the rationalist schools of Indian philosophy, this ancient school's reliance on reason was exclusive but strong.

Kanada, also known as Kashyapa, Uluka, Kananda and Kanabhuk, was an ancient Indian natural scientist and philosopher who founded the Vaisheshika school of Indian philosophy that also represents the earliest Indian physics.

Guṇa depending on the context means "string, thread, or strand", or "virtue, merit, excellence", or "quality, peculiarity, attribute, property".

The Brahma sūtras is a Sanskrit text, attributed to Badarayana, estimated to have been completed in its surviving form in approx. 400-450 CE, while the original version might be ancient and composed between 500 BCE and 200 BCE. The text systematizes and summarizes the philosophical and spiritual ideas in the Upanishads. It is one of the foundational texts of the Vedānta school of Hindu philosophy.

Pramana literally means "proof" and "means of knowledge". It refers to epistemology in Indian philosophies, and is one of the key, much debated fields of study in Buddhism, Hinduism and Jainism, since ancient times. It is a theory of knowledge, and encompasses one or more reliable and valid means by which human beings gain accurate, true knowledge. The focus of Pramana is how correct knowledge can be acquired, how one knows, how one doesn't, and to what extent knowledge pertinent about someone or something can be acquired.

Vaiśeṣika Sūtra,, also called Kanada sutra, is an ancient Sanskrit text at the foundation of the Vaisheshika school of Hindu philosophy. The sutra was authored by the Hindu sage Kanada, also known as Kashyapa. According to some scholars, he flourished before the advent of Buddhism because the Vaiśeṣika Sūtra makes no mention of Buddhism or Buddhist doctrines; however, the details of Kanada's life are uncertain, and the Vaiśeṣika Sūtra was likely compiled sometime between 6th and 2nd century BCE, and finalized in the currently existing version before the start of the common era. 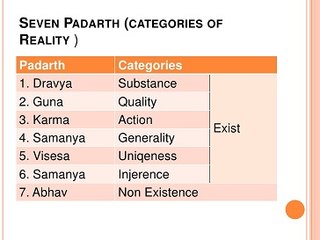 Padārtha is a Sanskrit word for "categories" in Vaisheshika and Nyaya schools of Hindu philosophy.

Abhava means non-existence, negation, nothing or absence. It is the negative of Bhava which means being, becoming, existing or appearance.

The Fifth Chapter of the Vaisheshika Sutras of Kanada deals with the notion of action and the connected concept of effort; and also deals with the various special phenomenon of nature to the supersensible force, called Adrishta.

Praśastapāda was an ancient Indian philosopher. He wrote the Padārtha-dharma-saṅgraha and a commentary, titled Praśastapāda Bhāṣya , on the Vaisheshika Sutras of Kanada, both texts are comprehensive books in physics. In these texts Prashastapada discusses the properties of motion. Ganganath Jha had translated Praśastapāda Bhāṣya which translation was published in 1916. Prashasta or Praśasta means praised or praiseworthy, lauded or laudable, commended or commendable or eulogized.