Valentin Friedland (February 14, 1490 –April 26, 1556), also called Valentin Troitschendorf (or Trozendorf or Trotzendorf or Trocedorfius) after his birthplace, was an eminent German scholar and educationist of the Reformation. Friedland was a friend of Martin Luther and Melanchthon. His fame as a teacher was an attraction of Goldberg in Silesia, where he taught pupils from far and near. The secret of his success lay in his inculcating on his pupils respect for their own honour. He had a great faith in the intelligence that evinced itself in clear expression. [1]

Friedland was born in Trozendorf near the town of Görlitz in Upper Lusatia, of parents so poor that they could not keep him at school. The boy taught himself to read and write while herding cattle; he made paper from birch bark and ink from soot. When difficulties were overcome and he was sent for education to Görlitz, his mother's last words were "Stick to the school, dear son". The words determined his career: he refused all ecclesiastical promotion, and lived and died a schoolmaster. [2]

Friedland became a distinguished student at the University of Leipzig, learned Ciceronian Latin from Peter Mosellanus and Greek from Richard Croke, and after graduation was appointed assistant master in the school at Görlitz in 1515. There he also taught the rector and other teachers. When Martin Luther began his attack on indulgences, Trotzendorff resigned his position and went to study under Luther and Melanchthon at Wittenberg, supporting himself by private tuition. Thence he was called to be a master in the school at Goldberg, and in 1524 became rector. There he remained three years, when he was sent to Liegnitz. [2]

Friedland returned to Goldberg in 1531 and began that career which has made him the typical German schoolmaster of the Reformation period. His system of education and discipline speedily attracted attention. He made his best elder scholars the teachers of the younger classes, and insisted that the way to learn was to teach. He organized the school modelled on the Roman Republic in such a way that the whole ordinary discipline was in the hands of the boys themselves. Every month a consul, twelve senators and two censors were chosen from the pupils, and over all Trotzendorff ruled as dictator perpetuus. One hour a day was spent in going over the lessons of the previous day. The lessons were repeatedly recalled by examinations, which were conducted on the plan of academical disputations. Every week each pupil had to write two exercitia styli, one in prose and the other in verse, and Trotzendorff took pains to see that the subject of each exercise was something interesting. The fame of the Goldberg School extended over all Protestant Germany, and a large number of the more famous men of the following generation were taught by Trotzendorf. [2]

After Friedland's school, his library, his assets, and the greater part of Goldberg were destroyed by a fire in 1554, he moved again to Liegnitz at the invitation of the duke there. His school, now with a significantly reduced number of pupils, found a place in a church. He gathered the means for rebuilding the school in Goldberg, but died before this was accomplished, in 1556. [3] 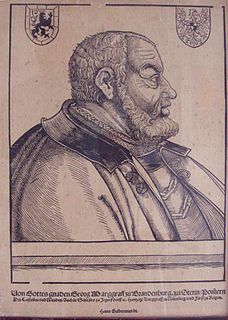 CasparSchwen(c)kfeld von Ossig was a German theologian, writer, and preacher who became a Protestant Reformer and spiritualist. He was one of the earliest promoters of the Protestant Reformation in Silesia.

Martin Helwig was a German cartographer of and from Silesia and pedagogue. He was born in Neisse and died in Breslau, Holy Roman Empire.

Justus Jonas, the Elder, or simply Justus Jonas, was a German Lutheran theologian and reformer. He was a Jurist, Professor and Hymn writer. He is best known for his translations of the writings of Martin Luther and Philipp Melanchthon. He accompanied Martin Luther in his final moments. 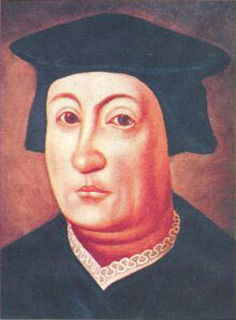 Justus Menius was a German Lutheran pastor and Protestant reformer whose name is Latinized from Jost or JustMenig.

Basil Faber (1520–1576), Lutheran schoolmaster and theologian, was born in Sorau, in lower Lusatia, in 1520. In 1538 he entered the University of Wittenberg, studying as pauper gratis under Philipp Melanchthon.

Zacharias Ursinus was a sixteenth-century German Reformed theologian and Protestant reformer, born Zacharias Baer in Breslau. He became the leading theologian of the Reformed Protestant movement of the Palatinate, serving both at the University of Heidelberg and the College of Wisdom. He is best known as the principal author and interpreter of the Heidelberg Catechism.

Renaissance humanism came much later to Germany and Northern Europe in general than to Italy, and when it did, it encountered some resistance from the scholastic theology which reigned at the universities. Humanism may be dated from the invention of the printing press about 1450. Its flourishing period began at the close of the 15th century and lasted only until about 1520, when it was absorbed by the more popular and powerful religious movement, the Reformation, as Italian Humanism was superseded by the papal counter-Reformation. Marked features distinguished the new culture north of the Alps from the culture of the Italians. The university and school played a much more important part than in the South according to Catholic historians. The representatives of the new scholarship were teachers; even Erasmus taught in Cambridge and was on intimate terms with the professors at Basel. During the progress of the movement new universities sprang up, from Basel to Rostock. Again, in Germany, there were no princely patrons of arts and learning to be compared in intelligence and munificence to the Renaissance popes and the Medici. Nor was the new culture here exclusive and aristocratic. It sought the general spread of intelligence, and was active in the development of primary and grammar schools. In fact, when the currents of the Italian Renaissance began to set toward the North, a strong, independent, intellectual current was pushing down from the flourishing schools conducted by the Brethren of the Common Life. In the Humanistic movement, the German people was far from being a slavish imitator. It received an impulse from the South, but made its own path.

Matthäus Aurogallus, German: Matthäus Goldhahn was a Czech linguist. Born in Chomutov, Bohemia as Matthäus Goldhahn, Aurogallus served as Professor of Hebrew at the University of Wittenberg and was a colleague of Philip Melanchthon and Martin Luther. He assisted Luther in the revision of the reformer's translation of the Old Testament, and made valuable contributions to the academic study of Hebrew.

Veit Amerbach, was a German Lutheran theologian, scholar and humanist, who converted to Catholicism.

Andreas Althamer was a German humanist and Lutheran reformer. He was born in Brenz. He studied at the universities of Leipzig and Tübingen. After completing his studies, he became a schoolteacher in Halle (Saale), Schwäbisch Hall and Reutlingen. In 1524, he was a priest in Schwäbisch Gmünd, where he tried to introduce the Reformation. He met with resistance from the Gmünder Council.

Konrad Wimpina was a German Roman Catholic theologian and humanist of the early Reformation period. He was a quiet and stubborn conservative, considered quiet but somewhat narrow. In theology he was a pupil of Martin Polich of Mellerstadt and a Thomist. 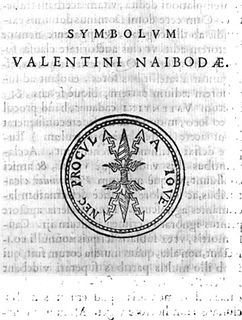 Valentin Naboth, known by the latinized name Valentinus Nabodus, was a German mathematician, astronomer and astrologer.

Georg Sabinus or Georg Schuler was a German poet, diplomat and academic.

Leonard Stöckel was a Lutheran teacher, theologian, writer, humanist and an influential reformer.

Gregor Brück (1483–1557) was a 16th-century figure of the Reformation, and Saxon Chancellor. He is also known by his latinised name Gregorius Pontanus. His role in the early 16th century in Germany, as legal advisor to Martin Luther, may be said to earn him the title of Lawyer of the Reformation. Although now much forgotten or unknown, his contribution to European history was almost certainly world-changing.