Valentine Greatrakes (14 February 1628 – 28 November 1682), also known as "Greatorex" or "The Stroker", was an Irish faith healer who toured England in 1666, claiming to cure people by the laying on of hands.

Greatrakes was born on 14 February 1628, at Affane, County Waterford, Ireland. He was the son of William Greatrakes (c. 1600–1643) and Mary Harris (died c. 1656), daughter of Sir Edward Harris, Chief Justice of Munster. Both his parents were English Protestants settlers. [1] He went to the free-school at Lismore until he was 13 years of age and was designed for the college of Dublin. However, when the Irish Rebellion of 1641 broke out he and his mother fled into England, where he was received by his great uncle, Edmund Harris. After Harris died his mother placed him with John Daniel Getsius, a German minister, of Stoke Gabriel, in Devonshire. [2]

War, the Commonwealth and Protectorate

After five or six years in England Greatrakes returned to his native country, which he found in a distracted state, and therefore spent a year in contemplation at the Castle of Cappoquin. In 1649 he was a lieutenant in Lord Broghill's regiment in the English Parliamentary army in Ireland, then campaigning in Munster against the Irish Royalists. In 1656, great part of the army being disbanded, so Greatrakes retired to Affine, his native place, and was made clerk of the peace for County Cork, Register for transplantation, and a Justice of the Peace. However he lost these positions after the Restoration. [2]

He seemed to have been very religious; his outlook was grave but simple. He said himself, that ever since that year 1662 he had felt a strange impulse or persuasion that he had the gift of curing the King's evil (scrofula); and this suggestion became so strong, that he stroked several persons, and cured them. [2]

Three years after that, an epidemical fever was raging in the country, he was again persuaded that he could also cure that. He made the experiment, and he affirmed to his satisfaction that he cured all who came to him. At length, in April, 1665, another kind of inspiration suggested to him, that he had the gift of healing wounds and ulcers; and experience, he also said, proved that he was not deceived. [2] He even found that he cured convulsions, the dropsy, and many other distempers. [2]

On 6 April 1665 Robert Phayre, a former Commonwealth Governor of County Cork, was living at Cahermore, in that county, when he was visited by Greatrakes (who had served in his regiment in 1649). Greatrakes cured Phayre in a few minutes of an acute ague. [3] John Flamsteed, the famous Astronomer, (then aged 19) went over to Ireland, in August 1665, to be touched by Greatrakes for a natural weakness of constitution, but received no benefit. [2] Crowds flocked to him from all parts, and he was reported to have performed such extraordinary cures, that he was summoned into the Bishop's court at Lismore, and, not having a licence for practising, was forbidden to lay hands on anyone else in Ireland. [2]

In 1665 Greatrakes was invited to England by his old commander, Lord Broghill (now Earl of Orrery), to cure Anne, Viscountess Conway of an inveterate headache. He arrived in England in early 1666 but failed to cure the Viscountess. Undaunted, he traveled through the country, treating the sick. [2]

King Charles II, being informed of it, summoned Greatrakes to Whitehall. While unpersuaded that Greatrakes had miraculous power, [4] the king did not forbid him to continue his ministrations. [2]

Greatrakes went every day to a place in London where many sick persons, of all ranks in society, assembled. Pains, gout, rheumatism, convulsions and so forth were allegedly driven by his touch from one body part to another. Upon reaching the extremities, reportedly, all symptoms of these ailments ceased. As the treatment consisted entirely of stroking, Greatrakes was called The Stroker. [5] Greatrakes ascribed certain disorders to the work of evil spirits. When persons possessed by such spirits saw Greatrakes or heard his voice, the afflicted fell to the ground or into violent agitation. He then proceeded to cure them by the same method of stroking. [2]

While many were skeptical, Greatrakes did find zealous advocates for the efficacy of his healing powers. He himself published, in 1666, a letter addressed to the celebrated Robert Boyle entitled A brief Account of Mr. Valentine Greatrakes and divers of the strange Cures by him performed &c. See also The Miraculous Conformist &c. by Henry Stubbe, M.D., a pamphlet printed at Oxford in 1666, wherein the author gives a succinct history of Greatrakes' life. Appended to the pamphlet were a number of certificates, signed by persons of known probity, attesting to the reality of Greatrakes' cures. [6]

Return to Ireland and farming

Greatrakes returned to Ireland in 1667, [7] and resumed farming in 1668 on £1,000 a year. [4] Although he lived for many years, he no longer kept up the reputation of performing those strange cures which have procured him a name. But in this his case is very singular, that on the strictest enquiry no sort of blemish was ever thrown upon his character, nor did any of those curious and learned persons, who espoused his cause, draw any imputation upon themselves. [7]

Greatrakes died on 28 November 1682 at Affane, County Waterford. He may be buried in Lismore Church or under the aisle of the old Affane Church near to his father (sources vary). [8]

Charles Mackay, in his Extraordinary Popular Delusions and the Madness of Crowds (1841), wrote that:

"Mr. Valentine Greatraks, who, without mentioning magnetism, or laying claim to any theory, practised upon himself and others a deception much more akin to the animal magnetism of the present day than the mineral magnetism it was then so much the fashion to study." [9]

James Randi, citing Mackay in his book The Faith Healers also considered Greatrakes to be a quack, who had deceived himself. [10]

The Battle of Affane was fought in county Waterford, in south-eastern Ireland, in 1565, between the forces of the Fitzgerald Earl of Desmond and the Butler Earl of Ormond. The battle ended in the rout of the Desmond forces. It was one of the last private battles fought in Britain or Ireland.

Colonel Robert Phaire, (1619?–1682), was an officer in the Irish Protestant and then the New Model armies and a Regicide. He was one of the three officers to whom the warrant for the execution of Charles I was addressed, but he escaped severe punishment at the Restoration through having married the daughter of Sir Thomas Herbert (1606-1682). He became a Muggletonian in 1662.

Bishop Thomas Hussey was a diplomat, chaplain and Bishop of the Roman Catholic Diocese of Waterford and Lismore from 1797 until his death in 1803. He is best known for taking part in talks with Richard Cumberland in a failed attempt to arrange a peace treaty between Spain and Britain during the American War of Independence.

Events from the year 1565 in Ireland.

Murrough MacDermod O'Brien, 6th Baron Inchiquin, 1st Baron O'Brien of Burren, 1st Earl of Inchiquin, was known as Murchadh na dTóiteán in reference to extensive burnings of the Irish who would not convert to Anglicanism.

Iffa and Offa East is a barony in County Tipperary, Ireland. This geographical unit of land is one of 12 baronies in County Tipperary. Its chief town is Clonmel. The barony lies between Iffa and Offa West to the west, Middle Third to the north-west and Slievardagh to the north-east. It is currently administered by Tipperary County Council. The entire barony lies within the geographic remit of the Roman Catholic Diocese of Waterford and Lismore with the exception of the parish of Clerihan which is in the Roman Catholic Archdiocese of Cashel and Emly.

The Restoration of the monarchy began in 1660. The Commonwealth of England, Scotland and Ireland (1649–60) resulted from the Wars of the Three Kingdoms but collapsed in 1659. Politicians such as General Monck tried to ensure a peaceful transition of government from the "Commonwealth" republic back to monarchy. From 1 May 1660 the English, Scottish and Irish monarchies were all restored under King Charles II. The term Restoration may apply both to the actual event by which the monarchy was restored, and to the period immediately before and after the event. 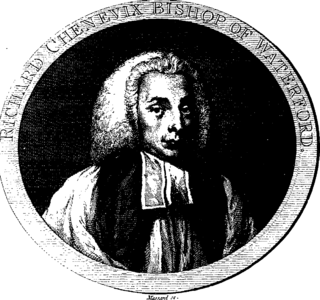 Richard Chenevix was Bishop of Waterford and Lismore. He was the grandfather of Melesina Trench and was responsible for her upbringing after she was orphaned, until his death.

The Dean of Waterford in the United Dioceses of Cashel and Ossory in the Church of Ireland is the dean of Christ Church Cathedral, Waterford.

William Palliser was an Anglican clergyman and academic. He was professor of divinity at Trinity College, Dublin, then successively Church of Ireland Bishop of Cloyne and Archbishop of Cashel.

Patrick Walsh was an Irish prelate who served as the Bishop of Waterford and Lismore from 1551 to 1578.

Sir Thomas Stanley was an English politician who sat in the Parliament of Ireland MP for County Tipperary and Waterford and Louth in the Restoration Parliament, 1661–62. He joined the Privy Council of Ireland in March 1674.

Animal magnetism, also known as mesmerism, was the name given by German doctor Franz Mesmer in the 18th century to what he believed to be an invisible natural force (Lebensmagnetismus) possessed by all living things, including humans, animals, and vegetables. He believed that the force could have physical effects, including healing, and he tried persistently but without success to achieve scientific recognition of his ideas.

Sir Edward Harris (1575–1636) of Cornworthy in Devon, was an English-born judge and politician in seventeenth-century Ireland. He was Chief Justice of Munster in Ireland, and sat as Member of Parliament for Clonakilty 1613–15 in the Irish House of Commons of the Parliament of Ireland. He was the grandfather of the faith healer Valentine Greatrakes.

Sir John Kendrick was an English merchant and politician who was Lord Mayor of London in 1652.