Valtournenche (local Valdôtain: Vótornéntse) is a town and comune in the Aosta Valley region of north-western Italy, 1500m above the sea level. It is named after and covers most of the Valtournenche, a valley on the left side of the Dora Baltea, from Châtillon to the Matterhorn. Valtournenche is close to Cervinia and in winter the two towns are connected also with the ski slopes. In fact, they are part of the same ski resort with also Zermatt, Switzerland. [3] 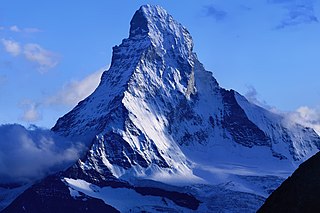 The Matterhorn is a mountain of the Alps, straddling the main watershed and border between Switzerland and Italy. It is a large, near-symmetric pyramidal peak in the extended Monte Rosa area of the Pennine Alps, whose summit is 4,478 metres (14,692 ft) high, making it one of the highest summits in the Alps and Europe. The four steep faces, rising above the surrounding glaciers, face the four compass points and are split by the Hörnli, Furggen, Leone/Lion, and Zmutt ridges. The mountain overlooks the Swiss town of Zermatt, in the canton of Valais, to the north-east and the Italian town of Breuil-Cervinia in the Aosta Valley to the south. Just east of the Matterhorn is Theodul Pass, the main passage between the two valleys on its north and south sides, and a trade route since the Roman Era. 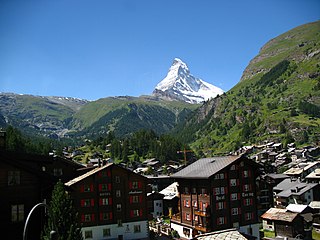 Zermatt is a municipality in the district of Visp in the German-speaking section of the canton of Valais in Switzerland. It has a population of about 5,800 inhabitants and is classified as a town by the Swiss Federal Statistical Office (FSO).

Macugnaga is a mountain village at 1,327 metres (4,354 ft) elevation, in the province of Verbano-Cusio-Ossola, in the north of the Piedmont region of Italy.

Cavalese is a comune of 4,004 inhabitants in Trentino, northern Italy, a ski resort and the main center in the Fiemme Valley. It is part of the Magnifica Comunità di Fiemme and, together with Predazzo, is the administrative, cultural and historical center of the valley. The town is a renowned tourist location, during winter for cross-country and alpine sky, and during summer for excursions. The town was the site of the Cavalese cable car disaster in 1998, when a US aircraft tore down the cable-car connecting the town to the nearby Cermis mountain during a training exercise, killing 20 people.

Cogne is a town and comune (municipality) in Aosta Valley, northern Italy, with 1369 inhabitants, as of 2017.

Alleghe is a village and comune in the province of Belluno in the Italian region of Veneto. 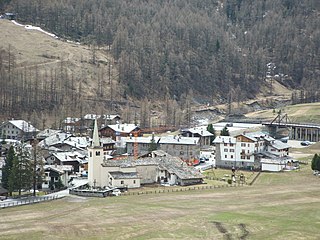 Rhêmes-Notre-Dame is a town and comune in the Aosta Valley region of north-west Italy.

Entracque is a small town in the Valle Gesso of the Maritime Alps of north-west Italy, about 20 kilometres (12 mi) southwest of Cuneo and close to the French border. It is the principal settlement and capoluogo of the comune or municipality of the same name in the Piedmontese Province of Cuneo.

Pievepelago is a comune (municipality) in the Province of Modena in the Italian region of Emilia-Romagna in the heart of the northern Apennine Mountains. Situated on the Scoltenna river, in a mountain valley, it is a tourist resort crossed by the "Via Vandelli". 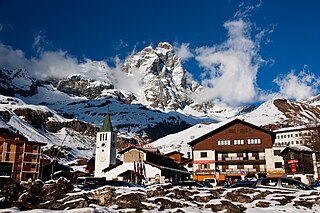 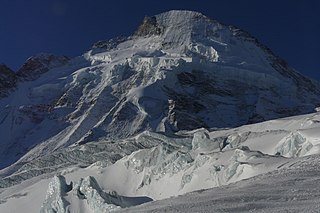 The Dent d'Hérens is a mountain in the Pennine Alps, lying on the border between Italy and Switzerland. The mountain lies a few kilometres west of the Matterhorn. 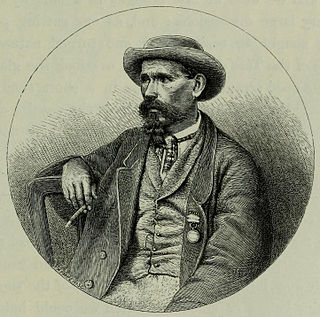 Refuge Jean-Antoine Carrel is a refuge in the Alps at an altitude of 3,830m in Aosta Valley, Italy. It is located on the south-west ridge of the Matterhorn, near the Swiss border.