Valvettithurai (Tamil : வல்வெட்டித்துறை, romanized: Valveṭṭittuṟai; Sinhala : වල්වෙට්ටිතුරෙයි, romanized: Valveṭṭitureyi), sometimes shortened as VVT or Valvai, is a coastal town of Jaffna District on the northeast coast of the Jaffna Peninsula in Northern Province, Sri Lanka governed by an Urban Council of the same name. Valvettithurai was historically known for its seafaring traditions and olden transnational shipping trade.

The town is popularly known for being the birthplace of Velupillai Prabhakaran, the head of the Liberation Tigers of Tamil Eelam or the Tamil Tigers, a Tamil nationalist militant group that waged a war for an independent state in the North and East. Valvettithurai is also the place of birth, of the leaders of the Tamil Eelam Liberation Organization, Kuttimani and Nadarajah Thangathurai. [1]

Valvettithurai in Tamil could mean "The port of the expanse of forest land/scrub jungle" or "The port of the raised stretch of open land". [2] [ better source needed ] The word Valvettithurai seems to have been derived from the combination of Tamil words Vallai meaning a big forest or a raised stretch of land, Vedi which means expanse or open space, and Thurai which refers to seaport.

According to folk etymology, was the foundation of the village laid by a Maravar chieftain known as Valliathevan, who was given the land by the founder of the Jaffna Kingdom. The clans of the Maravars of southern Tamil Nadu and the Karaiyars of Valvetthithurai have long had coastal military alliances through trade and marriage. [3] Both clans have long engaged in seatrade, with Valvettithurai being a prominent seaport in the northern Jaffna region. [4] [5]

The population of the coastal town are predominantly Shaivites. The Kadalodiekal own the major temples such as the famous Vaitheeswaran Sivan kovil. The Kadalodikal (Tamil name for mariners) of Valvettithurai, the wealthier clan of the Karaiyars were specifically involved in the seatrade between Jaffna region and the Coromandel Coast, including up to the coasts of Myanmar. [7] The Japanese occupation of Burma, hindered the seatrade of the Kadalodiekal. Their situation was deteriorated with the colonial independence of Sri Lanka, and many of the Kadalodiekal got engaged in large-scale smuggling between Sri Lanka and India. [8] The town also produced the renowned brigantine known locally as Annapoorani Ammal. [9] This native vessel known as thoni, built with a blend of Jaffna and European tradition, sailed from Valvettithurai to Gloucester in Massachusetts of United States in 1937. [10] Built in 1930 by native traditional shipwrighters for the purpose of serving as a cargo ship in the Indian rice trade, the vessel was bought by an american known as William C. Robinson. [11] Robinson, changing the name of the ship to Florence C. Robinson (after his wife), sailed to the U.S with a crew of six natives from Valvettithurai including their Thandayal (Tamil for sea captain) known as Kanagaratnam Thambapillai. [12]

Valvettithuri is a coastal town bounded by the Indian Ocean to its north. It is situated at the tip of the northern province and is considered as a place of strategic importance due to the presence of the Palk Strait and its close proximity to the coast of the Indian state of Tamil Nadu. [1] The northern coast of the island was severely impacted by the 2004 Indian Ocean tsunami which claimed several thousand lives.

It is also flourished by the Thondamannar lagoon which meets the sea through a long, narrow channel to the west of the town. The lagoon's water is brackish to saline. The lagoon has extensive mudflats, seagrass beds and mangrove swamps, particularly Avicennia. The lagoon attracts a wide variety of water birds including American Flamingoes, ducks, gulls, terns and other shorebirds.

There exists a barrage and bridge on the Highway preventing sea water from entering into the Thondamannar lagoon which is a primary source of drinking water for the locals. Across the bridge, to the west of the town, lie the towns of Paalai and Kankesanturai, much of whose lands have been seized under the Sri Lankan military's High Security Zone(HSZ). To the eastern end of the town, is the town of Paruthithurai or Point Pedro, the northernmost point of the island. [17] [ better source needed ]

The temperature varies from 26-34 °C. The town experiences a moderate climate in September–January. It receives much of its rainfall during the North East monsoon between October to December. Being a coastal town, the weather is also influenced by cyclones and tropical currents.

The population is mainly Sri Lankan Tamils of Hindu or Catholic faith. The main industry is farming, fishing and trading. The mouth of the Thondamannar lagoon has the popular Hindu temple dedicated to Lord Murugan called Selva Sannithy. The town had been severely affected by the country's civil war with a number of forced disappearances and attacks against local civilians by the Sri Lankan military. It was the site of two brutal massacres of local Tamil civilians by occupying armies. In 1985 the Sri Lankan military rounded local people up into the library and blew up the building. [19] In 1989 the Indian army rounded up people into the village square and opened fire on them, as well as people in shops and their homes. [20]

The Valvai Chithamabara College is the major higher educational institution in Valvettithurai. The town is the home to several primary schools: [21]

The town also houses a good number of public libraries. [22] 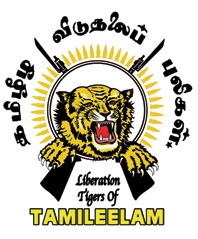 The Liberation Tigers of Tamil Eelam (LTTE) was a Tamil militant organization that was based in northeastern Sri Lanka. Its aim was to secure an independent state of Tamil Eelam in the north and east in response to the state policies of successive Sri Lankan governments that were widely considered discriminative towards the minority Sri Lankan Tamils, as well as the oppressive actions—including anti-Tamil pogroms in 1956 and 1958—carried out by the majority Sinhalese. 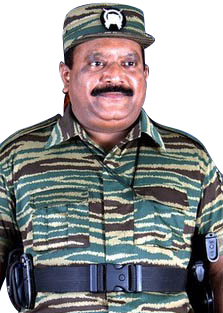 The Tamil Eelam Liberation Organization (TELO) is an Eelam Tamil organisation campaigning for the establishment of an independent Tamil Eelam in the northeast of Sri Lanka. The TELO was originally created as a militant group, and functioned as such until 1986, when most of its membership was killed in a conflict with the Liberation Tigers of Tamil Eelam (LTTE). Its surviving members reorganised themselves as a political party, and it continues to function as such today.

The Black Tigers were a wing of the Liberation Tigers of Tamil Eelam (LTTE), a militant Tamil separatist organization. They were specially selected and trained LTTE cadres whose missions included mounting suicide attacks, military and political targets, among them Sri Lankan President Ranasinghe Premadasa and former Indian Prime Minister Rajiv Gandhi. From their formation in 1987 until the defeat of the Tamil Tigers in 2009, more than 330 Black Tigers made suicide attacks on land and sea, mostly in Sri Lanka.

The Eelam Revolutionary Organisation of Students (EROS), also known as the Eelam Revolutionary Organisers, is a former Tamil militant group in Sri Lanka. Most of the EROS membership was absorbed into the Liberation Tigers of Tamil Eelam (LTTE) in 1990. The rump, which continues to use the EROS name, has transformed itself into a pro-government paramilitary group and political party. EROS' political wing is known as the Eelavar Democratic Front.

Sathasivam Krishnakumar was a Sri Lankan Tamil rebel and leading member of the Liberation Tigers of Tamil Eelam, a separatist Tamil militant organisation in Sri Lanka.

Sri Lankan Tamil militant groups rose to prominence in the 1970s to fight the state of Sri Lanka in order to create an independent Tamil Eelam in the north of Sri Lanka. They rose in response to the perception among minority Sri Lankan Tamils that the state was preferring the majority Sinhalese for educational opportunities and government jobs. By the end of 1987, the militants had fought not only the Sri Lankan security forces but also the Indian Peace Keeping Force. They also fought among each other briefly, with the main Liberation Tigers of Tamil Eelam (LTTE) rebel group dominating the others. The militants represented inter-generational tensions, as well as the caste and ideological differences. Except for the LTTE, many of the remaining organizations have morphed into minor political parties within the Tamil National Alliance, or as standalone political parties. Some Tamil militant groups also functioned as paramilitaries within the Sri Lankan military against separatist militants.

Karaiyar is a Sri Lankan Tamil caste found mainly on the northern and eastern coastal areas of Sri Lanka, and globally among the Tamil diaspora.

Rasaiah Parthipan was a Tamil Eelam revolutionary and member of the Liberation Tigers of Tamil Eelam (LTTE), a separatist Tamil militant organisation in Sri Lanka. He died while on hunger strike.

Brigadier Balraj was the senior commander of the Liberation Tigers of Tamil Eelam (LTTE).

Selvarajah Yogachandran, also known as Kuttimani was one of the leaders of the former Tamil militant organization TELO from Sri Lanka. He was arrested and sentenced to death, and was killed in the 1983 Welikada prison massacre along with the other TELO leader Nadarajah Thangathurai.

Nadarajah Thangavelu was a Sri Lankan Tamil rebel and one of the founders of the Tamil Eelam Liberation Organization, a separatist Tamil militant organisation in Sri Lanka. 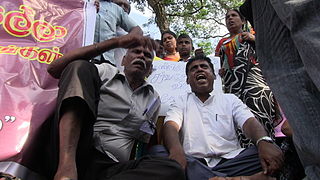 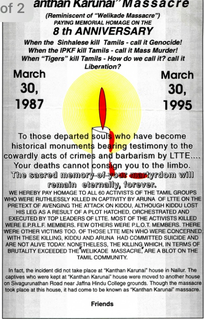 Kanthan Karunai massacre is the name of a mass murder of approximately 63 detainees held by the rebel group Liberation Tigers of Tamil Eelam (LTTE) on March 30, 1987 in Nallur, Sri Lanka. Most of the detainees held were surrendered youth from rival rebel group Eelam People's Revolutionary Liberation Front (EPRLF), as well few members from People's Liberation Organisation of Tamil Eelam and Tamil Eelam Liberation Organization (TELO) along with two local businessmen. The massacre is named after the name of a house that the detainees were formerly held but not where they were eventually killed.