Valyantsin Byalkevich (Belarusian : Валянцін Бялькевіч; 27 January 1973 – 1 August 2014), also sometimes spelled "Valiantsin Bialkevich") was a Belarusian football player. He was most notably a member of the Ukrainian club Dynamo Kyiv from 1996 to 2008. During the late 1990s, he was a playmaker for Dynamo Kyiv of the UEFA Champions League, and helped them reach the semi-finals of 1998–99 competition.

In September 1994 while playing for FC Dinamo Minsk, Byalkevich was banned from European competitions for one year by UEFA after testing positive for anabolic steroids following a UEFA Cup match. [1]

In October 2005, Byalkevich retired from the Belarus national team, having scored 10 goals, while being capped 56 times.

Byalkevich married Ukrainian pop singer Anna Sedokova (born in Ukraine) in 2004. They had a daughter on 8 December 2004 and divorced in 2006. In 2008, he accepted Ukrainian citizenship and continued to work in the Dynamo Kyiv football academy.

Serhiy Stanislavovych Rebrov is a Ukrainian football manager and former player who played as a striker. He is currently in charge of Nemzeti Bajnokság I side Ferencváros.

The Belarusian Premier League or the Vysheyshaya Liga is the top division of professional football in Belarus, and is organized by the Belarusian Football Federation. The number of teams in the competition has varied over the years from as high as 17 to as low as 11 (2012). As of 2019, the league includes 16 teams. Each team plays every other team twice during the course of the season. At the end of the season two teams are relegated to the Belarusian First League, and two are promoted from the First League to replace them. 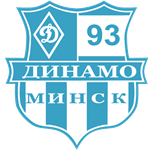 FC Dinamo-93 Minsk was a Belarusian football club based in Minsk. They disbanded in 1998.

Eastern European Hockey League (EEHL) was a regional ice hockey league which existed from 1995 to 2004.

Sergei Aleksandrovich Kornilenko is a Belarusian professional football coach and a former player who played as a striker. He is an assistant coach with Krylia Sovetov Samara. In Belarus, both Belarusian and Russian languages are official. Thus his name, usually transliterated as Sergei Kornilenko, can be alternatively spelled as Syarhey Karnilenka.

Andrei Vikentyevich Zygmantovich is a Belarusian footballcoach and a former player.

Pyotr Pyatrovich Kachura is a former Belarusian footballer. Starting off with his home town club Dynamo Minsk he went on to have spells at Sheffield United in England and Chengdu Wuniu in China before returning to his homeland, playing for Minsk for a second spell and later for Sokol Saratov. Following his retirement he went on to have a spell as manager at Dinamo Minsk in 2006–07. As a player, he also played for the Belarus national side on 29 occasions, scoring five goals.

Gennady Anatolyevich Tumilovich is a Belarusian football coach and a former player.

Alyaksandr Khatskevich is a Belarusian football manager and a former player. He is the manager of Russian club FC Rotor Volgograd.

Alyaksandar Lukhvich is a Belarusian professional football coach and a former player. He made his professional debut in the Soviet Top League in 1990 for FC Dinamo Minsk. 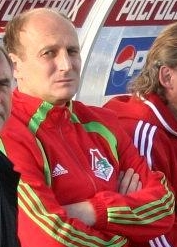 Uladzimir Makowski is a Belarusian football coach and former player.