He was born in 1912 into a wealthy family in Sonawade village, Savantwadi state, ruled by the Bhonsale clan, and grew up in Kudal area, also in Konkan belt, Sindhudurg district, Maharashtra in western India. [2]

He was with the famous Prabhat Film Company since it started making talkies. He acted, sang, and sometimes composed songs in Prabhat's films like Dharmatma and Sant Dnyaneshwar. After learning the craft of music composition, he stuck solely to it since the 1940s.

He scored music for a majority of V. Shantaram's films when the latter broke away from Prabhat to form his own film studio. Their relations soured in late 1950s after which Vasantrao Desai never worked for his former mentor again.

Maithreem Bhajata is a benediction composed in Sanskrit by sant Jagadguru Shri Chandrasekharendra Saraswati of the Kanchi Mutt.

The song was set to a Ragamalika by composer Shri Vasant Desai. It was rendered at the United Nations on Oct. 23, 1966 on the occasion of the UN day, by Bharat Ratna Smt. M. S. Subbulakshmi.

Vasant Desai went back home on 22 December 1975 after a full day recording of a special musical programme at HMV Studios attended by high-profile musicians as it was in praise of Indira Gandhi. He stepped into the elevator of his apartment building and due to some technical glitch, the lift began to move, crushing him to death. [5] 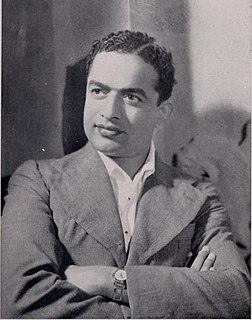 Jhanak Jhanak Payal Baaje is a 1955 Bollywood film directed by V. Shantaram. It stars Shantaram's wife Sandhya and dancer Gopi Krishna in lead roles. One of the earlier Technicolor films made in India, the film won the All India Certificate of Merit for Best Feature Film, the National Film Award for Best Feature Film in Hindi, and the Filmfare Best Movie Award. The film was declared a "Super Hit" at Box office India.

Do Aankhen Barah Haath is a 1957 Indian Hindi-language comedy drama film directed by V. Shantaram, who also starred. It is considered to be one of the classics of Hindi cinema and is based on humanistic psychology. It won a Silver Bear at the 8th Berlin International Film Festival and a Golden Globe Award in the new category Samuel Goldwyn International Film Award for best film produced outside of the United States. The film is also remembered for the song "Aye Maalik Tere Bande Hum", sung by Lata Mangeshkar and written by Bharat Vyas. 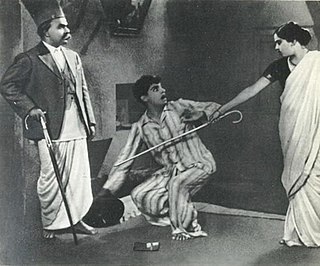 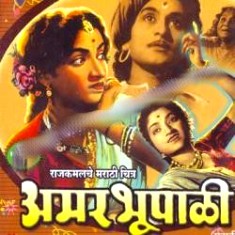 Amar Bhoopali is a 1951 Indian film, produced and directed by V. Shantaram and written by Vishram Bedekar. It is a true story about a simple cow herder who has an innate gift of poetry, set in the waning days of the Maratha confederacy, c. early 19th century. It is an ode to the saffron flag of Marathas, calling on people to rise again against the foreign enemy. It was nominated in the category of Grand Prize of the Festival at the 1952 Cannes Film Festival. 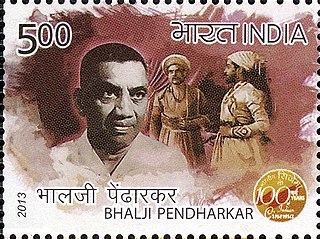 Bhalji Pendharkar was a film personality in India, and recipient of Dadasaheb Phalke Award, the most prestigious award in the field.

Ayodhyecha Raja, literally "The King of Ayodhya", was the first Marathi talkie, released in 1932, directed by Shantaram Rajaram Vankudre. It is based on the mythological story of Raja Harishchandra of Ayodhya and his test by sage Vishwamitra, as recounted in Valmiki's epic, Ramayana. 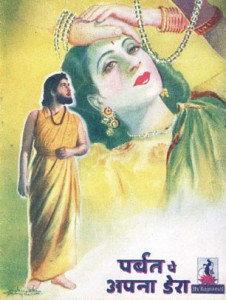 Parbat Pe Apna Dera is a Bollywood film directed by V. Shantaram. It was released in 1944. The story, dialogues and lyrics were written by Dewan Sharar. The music was composed by Vasant Desai. The film was produced under the Rajkamal Kalamandir banner and starred the "sensitive actress" Vanmala. Ulhas, cited as an actor known for his "melodramatic histrionics and a sonorous voice" was chosen to play the lead role of an "ascetic turned playboy". The cast included Shantarin, Madan Mohan, Kanta Kumari and Baby Nalini. 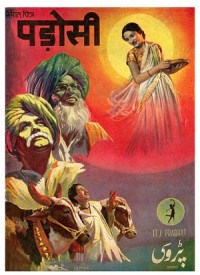 Shejari is also known as Padosi in Hindi version as. Padosi is a 1941 Hindi social drama film directed by V. Shantaram. It was produced by Prabhat Film Company and the bilingual film in Marathi and Hindi was the last film Shantaram made for Prabhat before venturing to form his Rajkamal Kalamandir. The film is cited as one of the three social classics Shantaram made at Prabhat. The other two were Duniya Na Mane (1937) and Aadmi (1939). The story and dialogue were by Vishram Bedekar in the Marathi version, while the dialogues in the Hindi version were by Pandit Sudarshan, who also wrote the lyrics. The music director was Master Krishnarao. The famous character artist Radhakrishan made his acting debut in the film as a villain. The film starred Mazhar Khan, Gajanan Jagirdar, Anees Khatoon, Radha Kishan, Lajwanti, Sumitra, Gopal and Balak Ram. 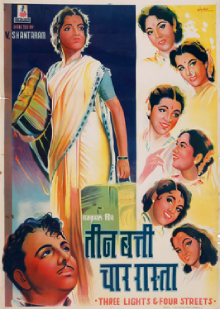 Teen Batti Char Raasta is a 1953 Hindi comedy-drama film on national integration directed by V. Shantaram. The film was made under the Rajkamal Kalamandir banner and produced by Shantaram. The story and dialogue were by Diwan Sharar while the cinematography was by G. Balkrishna. With music composed by Shivram Krishna, it had lyrics by Pyare Lal Santoshi. The star cast included Karan Dewan, Sandhya, Shashikala, Nirupa Roy, Sheila Ramani, Dewan Sharar and Lalita Kumari. 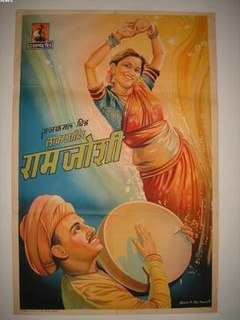 Lokshahir Ram Joshi also called Matawala Shair Ram Joshi in Hindi, is a 1947 Marathi biopic film of the poet Ram Joshi, written by G. D. Madgulkar, directed by Baburao Painter and co-directed by V. Shantaram. Shantaram had given the direction to Painter but had to complete the film when Painter fell ill during production. Produced under the Rajkamal Kalamandir banner, it is also referred to as Lok Shahir Ramjoshi. The story writer was G.D. Madgulkar, who is cited as the "first specialist film writer" in Marathi cinema. This film was his first "full-fledged writing assignment", wherein he wrote the story, screenplay, dialogue and lyrics. It was also his debut as a screenplay writer. The film starred Jayaram Shiledar as Ram Joshi and Hansa Wadkar as Baya. The rest of the cast included Shakuntala Paranjpye, Parashuram, Sudha Apte and G. D. Madgulkar. 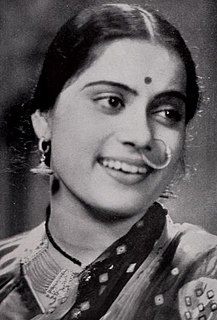 Shanta Apte (1916–1964) was an Indian singer-actress who worked in Marathi and Hindi cinema. Renowned for her roles in films like Duniya Na Mane/Kunku (1937) and Amar Jyoti (1936) under the Prabhat Films banner, she was active in Indian cinema from 1932 to 1958. Apte's impact on Marathi cinema "paralleled" that of Kanan Devi in Bengali cinema. Along with Kanan Devi, Apte is cited as one of the "great singing stars" from before the playback singing era. Apte began her career in films playing the role of a young Radha in the Marathi film Shyamsunder (1932). She joined Prabhat Films acting in her first Hindi language film Amrit Manthan in (1934).