Vaughan Oliver (12 September 1957 – 29 December 2019) was a British graphic designer based in Epsom, Surrey. Oliver was best known for his work with graphic design studios 23 Envelope and v23. [1] Both studios maintained a close relationship with record label 4AD between 1982 and 1998 and gave distinct visual identities for the 4AD releases by many bands, including Mojave 3, Lush, Cocteau Twins, The Breeders, This Mortal Coil, Pale Saints, Pixies, and Throwing Muses. Oliver also designed record sleeves for such artists as David Sylvian, The Golden Palominos, and Bush.

A book collecting his work, Vaughan Oliver: Archive, was published in 2018.

Oliver was born in Sedgefield, County Durham on 12 September 1957. [2] [3] [4] He developed an interest in graphic design through his love of music, in particular the work of Roger Dean. [5] He said in 2014 "There was no real culture, my parents were not really interested in anything unusual – everything I was getting was through record sleeves. It was a democratic way of discovering art." [4] It was not until he studied graphic design at Newcastle upon Tyne Polytechnic that he took the subject seriously. [5] Through his studies his interests broadened to include inspiration from the work of Salvador Dali, Surrealism and Pop artists such as Robert Rauschenberg and Andy Warhol. [5] After graduating in 1979, Oliver went to London hoping to find a designing job with a large design group. He soon found out that he was not made for working with big corporations or designing for the commercial world. He subsequently met the owner of the record label 4AD, Ivo Watts Russell. This encounter led to a thirty-year partnership between Vaughan Oliver and 4AD. [6]

23 Envelope consisted of Oliver (graphic design and typography) and Nigel Grierson (photography). Together, they created the artwork for almost all 4AD releases until 1987. Grierson left 23 Envelope in 1988. [1] At that time, Oliver continued to work for 4AD under the studio name v23, collaborating with Simon Larbalestier, Marc Atkins and others. [3]

In February 1990, Oliver was asked to bring together the work he had done so far for 4AD to be shown for the first time in an art gallery, the Espace Graslin in Nantes, France. The exhibition gathered so much media exposure throughout Europe that it subsequently moved to the Parc de la Villette in Paris. [7] An illustrated catalogue titled Exhibition/Exposition was published to coincide with both Nantes and Paris exhibitions. [7]

In 1994, many of those who had collaborated with Oliver over the previous decade contributed to an illustrated catalogue for the retrospective exhibition of his work held at the Pacific Design Center in Los Angeles, This Rimy River. [8] Recollections of the v23 design experience were provided by individuals such as design writer Rick Poynor, [9] and art critic Ian McKay who frames Oliver's work in a fine art context. [8] [10]

In 2000 a major monograph Vaughan Oliver: Visceral Pleasures by Rick Poyner was published by Booth-Clibborn Editions.

In 2011, Oliver was awarded an honorary Master of Arts from the University for the Creative Arts, [11] where he taught on the Epsom campus as a visiting professor. [12] Two books of work were published. [6]

Oliver's album art helped to shape the aesthetic of 4AD, a cult indie record label that was prominent from the 1980s well into the 1990s. The mysterious qualities in his album art were inspired by surrealist painter Salvador Dalí, whom Oliver admired during his college years. Oliver created album artwork for a number of 4AD bands, including Pixies, Cocteau Twins, The Breeders and This Mortal Coil. [13] Although Oliver worked exclusively with 4AD, he would occasionally work with non-music related clients. [6] He had an influence on the post pop-punk music industry, inspiring hundreds of artists to be different, mysterious and explorative. [14] During the early years of 4AD, Oliver was credited with giving the bands and the label an identity through his visual language, despite their adherence to different genres. [15]

Oliver produced the artwork for the Pixies' entire discography during his lifetime, including the albums Come On Pilgrim (1987), Surfer Rosa (1988), Doolittle (1989), Bossanova (1990), Trompe Le Monde (1991), Indie Cindy (2014), Head Carrier (2016) and Beneath the Eyrie (2019), as well as numerous singles and EPs. In 2009, Oliver designed the Pixies' Minotaur, a 26-pound box set consisting of the band's first five albums, a 96-page fine art book and a 52-page photo book. [16] Oliver stated that, with each Pixies release, he had looked to achieve "a sense of continuity" within the catalog but also employ a "fresh approach", and that his ethos "was always about building individual identities for bands." [17]

Among Oliver's other interests was football. Oliver was a qualified FA coach, [5] and he was a keen supporter of Sunderland. [18] He designed the sleeve of their 1992 FA Cup single and had been approached by the club to redesign their crest. [5]

Cocteau Twins were a Scottish rock band active from 1979 to 1997. They were formed in Grangemouth by Robin Guthrie and Will Heggie (bass), adding Elizabeth Fraser (vocals) in 1981 and replacing Heggie with multi-instrumentalist Simon Raymonde in 1983. The group has earned critical praise for their distinctive ethereal sound and the soprano vocals of Fraser, whose lyrics often abandon recognisable language. They pioneered the 1980s alternative rock subgenre of dream pop. 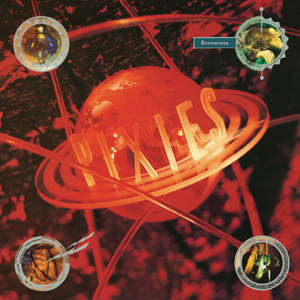 Bossanova is the third studio album by American rock band Pixies. It was released in August 13, 1990 on the English independent record label 4AD in the United Kingdom and by Elektra Records in the United States. The album's sound, inspired by surf rock and space rock, complements its lyrical focus on outer space, which references subjects such as aliens and unidentified flying objects.

This Mortal Coil were a British music collective led by Ivo Watts-Russell, founder of the British record label 4AD. Although Watts-Russell and John Fryer were the only two official members, the band's recorded output featured a large rotating cast of supporting artists, many of whom were otherwise associated with 4AD, including members of Cocteau Twins, Pixies, and Dead Can Dance. The project became known for its gothic, dream pop sound, and released three full albums beginning in 1984 with It'll End in Tears.

Simon Philip Raymonde is an English musician and record producer. He is the son of the late arranger and composer Ivor Raymonde. He is best known as the bass guitarist and keyboard player with the Scottish band Cocteau Twins from 1983 to 1997. 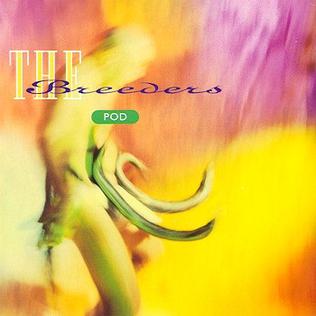 Ivo Watts-Russell is a British music producer and record label executive. He was joint-founder with Peter Kent of the indie record label 4AD. He has produced several records, although he prefers to use the term "musical director".

Lonely Is an Eyesore is a compilation on the 4AD label. Released in June 1987, it features artists who were signed to the label at that time. All tracks were recorded during the period immediately preceding the release (1985-1987), with the exception of "Frontier" by Dead Can Dance, which was a demo by the group from 1979. The title of the release comes from the lyric of the track "Fish" by Throwing Muses, at that time the newest signing to the label. 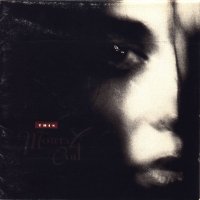 Filigree & Shadow is the second album released by 4AD collective This Mortal Coil, an umbrella title for a loose grouping of guest musicians and vocalists brought together by label boss Ivo Watts-Russell. The supergroup consists primarily of artists attached to the 4AD label, of which Watts-Russell was the co-founder and the owner and director. The album was released in September 1986, and entered the UK Independent Music chart on 11 October 1986 and peaked at #2, spending 16 weeks on the chart in total.

John Fryer is an English record producer. Best known for his production work, he has also performed as a musician, as one of the two constant members of This Mortal Coil, providing keyboards, strings and synthesizer sequencing for the band, and its offshoot, The Hope Blister.

Ethereal wave, also called ethereal darkwave, ethereal goth or simply ethereal, is a subgenre of dark wave music that is variously described as "gothic", "romantic", and "otherworldly". Developed in the early 1980s in the UK as an outgrowth of gothic rock, ethereal wave was mainly represented by 4AD bands such as Cocteau Twins, This Mortal Coil, and early guitar-driven Dead Can Dance. 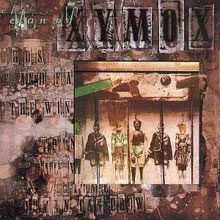 Clan of Xymox is the debut studio album by Dutch dark wave band Clan of Xymox, released 1 July 1985 by 4AD.

23 Envelope was the name given to the graphic design partnership of graphic designer Vaughan Oliver and photographer/filmmaker Nigel Grierson from 1980–1988. During this time, they created a distinct visual identity for the British independent music label 4AD through their record sleeve designs for bands such as Cocteau Twins, Dead Can Dance, and This Mortal Coil.

Jeffery Keedy, born 1957, is an American graphic designer, type designer, writer and educator. He is notable as an essayist and contributor to books and periodicals on graphic design. He is also notable for the design of Keedy Sans, a typeface acquired in the permanent collection of the Museum of Modern Art in 2011.

Simon Larbalestier is a Welsh photographer. 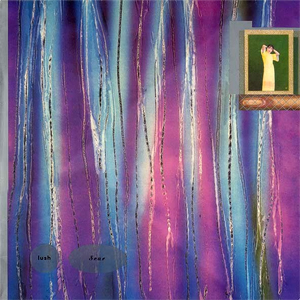 Scar is the debut mini album by the English alternative rock band Lush. It was released on 9 October 1989 on 4AD. Originally intended to be a three-track single release, Scar was produced by John Fryer and the band themselves and recorded at London's Blackwing Studios in 1989. 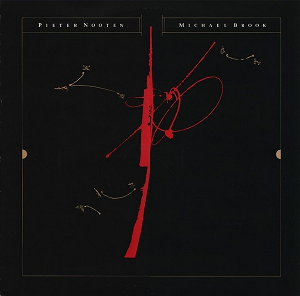 Sleeps with the Fishes is the lone collaborative album from Clan of Xymox founding member Pieter Nooten and Canadian guitarist/producer Michael Brook, released by 4AD on 12 October 1987. Intended as Nooten's debut solo album after a brief split from Clan of Xymox, the record turned into a collaboration with Brook after a suggestion from 4AD label founder and boss Ivo Watts-Russell. Though not a huge commercial success, Sleeps with the Fishes was described by AllMusic as "essential listening for fans of 4AD, ambient music, minimalism, experimental electronic music, and morose themes alike... an overlooked masterpiece."

Martin Masai Andersen is a Danish photographer, art director and designer, based in South London. He also lectures at a number of universities. Andersen has made long-term documentary photography projects on football fans and dog shows, and made music videos for The Breeders, Lush and Iceage. His animation work has won a Clio Award and been shown in group exhibitions at Manchester Art Gallery and at SeaCity Museum in Southampton.