Greek vehicle registration plates are composed of three letters and four digits per plate (e.g. ΑΑΑ-1000) printed in black on a white background. The letters represent the district (prefecture) that issues the plates while the numbers range from 1000 to 9999. As of 2004 a blue strip was added on the left showing the country code of Greece (GR) in white text and the Flag of Europe in yellow. Similar plates but of square size with numbers ranging from 1 to 999 are issued for motorcycles which exceed 50 cc in engine size.

With the exception of Athens and Thessaloniki which are represented by just the first letter of the three, all other districts are represented by the first 2 letters. The final one or two letters in the sequence changes in Greek alphabetical order after 8,999 issued plates. For example, Patras plates are ΑΧΑ-1000, where ΑΧ represents the Achaia prefecture of which Patras is the capital. When ΑΧΑ-9999 is reached the plates turn to ΑΧΒ-1000 and this continues until ΑΧΧ is finished. Only letters from the intersection of the Latin and Greek alphabets are used, specifically Α, Β, Ε, Ζ, Η, Ι, Κ, Μ, Ν, Ο, Ρ, Τ, Υ, Χ (in Greek alphabetical order). This is because Greece is a contracting party to the Vienna Convention on Road Traffic, which in Annex 2 requires registration numbers to be displayed in capital Latin characters and Arabic numerals. The rule applies in a similar way in Russia, Ukraine, Belarus, Bosnia and Herzegovina and Bulgaria.

Combinations used for overseas residents are L-NNNN (where L = letter and N = number) and are limited. Until 2003, taxis used L-NNNN; the plate was aligned with the prefecture and the letters were colored red.

Up until 1954 Greek number plates were quite simple: black numbers on a white background, indicating the serial number shown on the car's license. These started at 1 and advanced to approximately 75-000 when the system was changed. The owner had to provide the plates and specifications were minimal: the size of the plates and numbers, as well as their respective colours. This meant that plates were not very uniform. Taxis had to indicate the initial of the city they were licensed in (e.g. "A" for Athens). In 1954 it was compulsory for all vehicles to change to a new system.

For just 2 years the system was L-NNN, L-NNNN or L-NNNNN with black characters on yellow background where L was the initial of the city they were licensed in (e.g. "A" for Athens, "Θ" for Thessaloniki etc.). All these plates display "1953-54" (the initial time period for the change - later revised) in black characters on a white background using a smaller typeface in the top left corner. These plates were compulsorily withdrawn in 1956.

In 1956 the system was again changed to just numbers NNNNNN. NNNNNN could be any number from one to six digits starting once again with "1" and ending this time at about "451000", though not all numbers were allocated. Characters were black on white background with a band at the top of both front and rear plates indicating city/district of registration and type of usage (private, commercial etc). Sometime after the early 60s the band on the front plate was abandoned and hence that plate became shorter in height, while the band at the rear became blue. This time it was not compulsory to change plates after 1972 when the newer system arrived. Hence these so-called "six-figure plates" can still occasionally (as of 2018) be spotted on a few old vehicles.

In 1972, they became lettered and the system was LL-NNNN while trucks used L-NNNN. Again, they were black characters on white background but with a different typeface. It was not compulsory to change these plates when the newer system arrived.

In 1982, the system changed to LLL-NNNN and the first two letters are prefecture letters (with the exception of the biggest prefectures Attica/Athens and Thessaloniki where only the first letter remained the same). Again, it was not compulsory to change to the newer "euro" plates in 2004.

In 2004 the euroband and international country code were added to the left and the typeface changed. In all other respects the previous system continued with the numbering allocation carrying on as from pre-2004.

The first 2 of 3 letters (which are listed below) of a licence plate usually represent the prefecture (nomos) where the car was registered. The almost full list of plates in Greece is below (next to the prefecture / district is its capital or an area within the prefecture that the plates are issued; some prefectures have more than one combination):

Vehicles that belong to public services and armed forces use special license plates with the following letter combinations followed by numbers: [ citation needed ]

The following categories are conflicting: The same letter combinations are used for both public services and specific regions:

For truck trailers over 3.5 tonnes without a prime mover:

The letter P followed by a hyphen and 5 or 4 numerals is used. 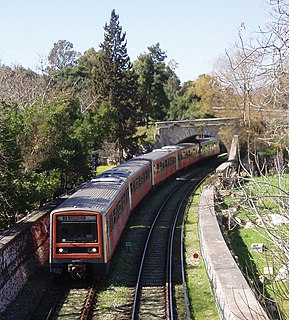 The Proastiakos is Greece's suburban railway services, which are run by TrainOSE, on infrastructure owned by the Hellenic Railways Organisation (OSE). 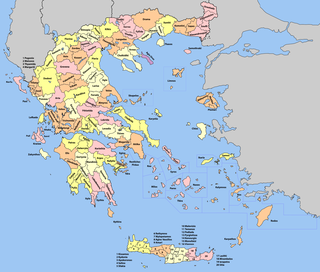 The Hellenic Railways Organisation or OSE is the Greek national railway company which owns, maintains and operates all railway infrastructure in Greece with the exception of Athens' rapid transit lines. Train services on these lines are run by TrainOSE S.A., a former OSE subsidiary. In addition OSE owns and maintains the rolling stock used by TrainOSE and maintains preserved special rolling stock, withdrawn locomotives and railcars. OSE was founded in 1971, taking over from the Hellenic State Railways, which was founded in 1920.

Hellenic Army is commanded by the Hellenic Army General Staff which supervises five major commands. These are:

ANEK Lines is one of the largest passenger shipping company in Greece. It was founded in 1967 by numerous shareholders who were inhabitants of Crete. It operates passenger ferries, mainly on Piraeus-Crete and Adriatic Sea lines. 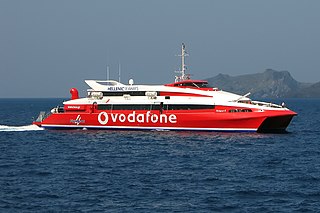 FOSSCOMM is a Greek conference aiming at free-software and open-source enthusiasts, developers, and communities. It has been hosted in various cities around Greece and its goal is to promote the use of FOSS in Greece and to bring FOSS enthusiasts together.

El. Venizelos is a Greek ferry, which is the oldest ship in the ANEK Lines fleet. She is a motor Ro-Ro/Passenger ferryboat, built in 1984 at Stocznia im. Komuny Paryskiej at Gdynia, Poland as Stena Polonica and completed in 1992 in Perama, Piraeus, Greece as El Venizelos. She is related to Stena Line's Stena Vision and Stena Spirit, as well as the unfinished Lelakis' Regent Sky. She holds a total of 2300 passenger and 850 cars and has 1606 beds. for passengers. She has four Zgoda-Sulzer 16ZV 40/48 diesel engines, with combined power of 34,130 kW and reaches speeds of up to 22 knots. It also has WiFi Internet, two restaurants. two bars, an amusement arcade, a casino, a church, a duty-free shop, a playground, a hospital, escalators, elevators, air-conditioning and a swimminh pool and her cabins can be either lux, 2-bed, 4-bed or for disabled. She was named after Eleftherios Venizelos, a Greek politician with Cretan origins. On March 30 El Venizelos laid-up since three days in Piraeus Anchorage had cases with the COVID-19. On 2 April at nine pm El Venizelos moored at the Piraeus Port.