Veikkausliiga (Swedish : Tipsligan) is the premier division of Finnish football, the highest tier of the Finnish football league structure, comprising the top 12 clubs of the country. Its main sponsor is the Finnish national betting agency Veikkaus, hence the league's name. Veikkausliiga was founded in 1990; before that the top division was called Mestaruussarja (championship series) since 1930 which was an amateur or semi-professional league. Between 1908 and 1930 the championship was decided as a knock-out cup competition.

During the 1990 and 1991 seasons the Veikkausliiga was played under the name "Futisliiga" (Swedish : Fotbollsligan). [1]

As with certain other cold-climate European countries, league matches in Finland are played in summer, with a schedule usually from April to October. The format and number of teams has changed frequently. As of 2020 there are 12 teams, which first face the other teams two times. After the two rounds, the league is divided into championship group (6 teams) and challenge group (6 teams), and both groups play a single series of five further matches. At the end of the season, the last team is relegated to Ykkönen, whose winner is promoted to Veikkausliiga, and the second last team plays a two-leg play-off versus the Ykkönen runner-up.

In 2010 the average annual salary with fringe benefits for a league player was 24,400 euros. [2] Veikkausliiga is a founding member of the European Professional Football Leagues association. [3]

The Veikkausliiga clubs in the 2022 season are presented in the table below. Number of seasons includes seasons played in Veikkausliiga and preceding Mestaruussarja and seasons of predecessor teams after season 2021. In the case of mergers, the seasons of the predecessor with the most seasons are counted.

1) FC Jazz was formerly known as PPT (Porin Pallotoverit).2) Kuusysi and Reipas merged their professional teams in 1996 to form FC Lahti. Kuusysi returned to Kakkonen in 2011 under the name Lahti Akatemia, while Reipas returned to Kolmonen one year later.3) Tampere United was formed in 1998 after it inherited the place of FC Ilves. Tampere United was dissolved in 2011 and Ilves, which in the meantime had bought the place of KooVee in second division, got promoted back to the highest league in 2015.

The following clubs have won:

30 clubs have been Champions.

Ykkönen is the second highest level of the Finnish football league system, although it is the highest league managed by the Football Association of Finland. The teams also play a pre-season league cup, the Ykköscup.

Keith Thomas Armstrong is a former footballer who played in the Football League for Sunderland, Newport County and Scunthorpe United, and in Finland for a number of clubs, where he also coached.

The 1990 Futisliiga was won by Kuusysi Lahti. However during the playoff Helsingin JK won the Finland national championship.

The 2002 season was the 72nd completed season of Finnish Football League Championship, known as the Veikkausliiga. At the same time it was the 13th season of the Veikkausliiga. This season three teams could promote from the 2nd division and only one would relegate, because the Veikkausliiga would extend its number of participating teams from 12 to 14, starting the 2003 season.

Reipas Lahti is a sports club based in Lahti, Finland. It is involved in various of ball games and also other sports. The club emerged in the late 1940s, when the inhabitants of Viipuri had mostly been relocated in Lahti, after evacuation during World War II. As a consequence, the activities of Viipurin Reipas, which had been founded in 1891, were continued in the new home town of the evacuees. The name of the club was still Reipas Viipuri until 1962, when the ball game section became simply Reipas.

Mestaruussarja was the top division of Finnish football from 1930 to 1989. It was replaced by Veikkausliiga in 1990. 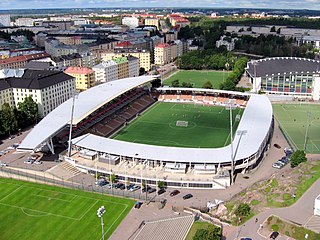 HIFK Fotboll or IFK Helsingfors is an association football section of HIFK, a sports club based in Helsinki, Finland. The men's football team competes in the highest tier of Finnish football, Veikkausliiga. Their home ground is the Bolt Arena.