Last updated June 12, 2021
This article is about the 1979 film. For other uses, see Vengeance Is Mine.
1979 Japanese film directed by Shōhei Imamura

Vengeance Is Mine (Japanese: 復讐するは我にあり, Hepburn: Fukushū Suru wa Ware ni Ari) is a 1979 Japanese film directed by Shōhei Imamura, based on the book of the same name by Ryūzō Saki. It depicts the true story of serial killer Akira Nishiguchi, with the film using the name Iwao Enokizu. [1]

The film's story is told in a series of flashbacks. In the opening scenes, Iwao Enokizu (Ken Ogata), is a prisoner of the police. A huge crowd of journalists and an angry mob greet him as he enters a cell. The police interrogates him but he refuses to answer. The story goes back to the initial murders. Enokizu tricks and then kills two men and steals a large sum of money. He puts on a suit and disappears. Enokizu travels to another city. At the train station, he asks a taxi driver to take him to an inn where he can get a prostitute. Enokizu is sexually insatiable. He tells the innkeeper, a woman called Haru (Mayumi Ogawa), that he is a professor at Kyoto University. The police, searching for Enokizu, put out bulletins with his face on television. The prostitute thinks the professor is Enokizu, but she is told not to go to the police because of her job.

Enokizu's background is as the son of a Catholic father (Rentarō Mikuni) who lost his fishing boats to the Japanese navy in the 1930s. Enokizu is a rebellious, violent child. As a young man, he is convicted and imprisoned. His mother is ill. His wife (Mitsuko Baisho) is attracted to his father. She divorces Enokizu, but then is persuaded by Enokizu's father to remarry him, due to the father's Catholic beliefs. After the remarriage, she tries to seduce the father, but fails. Enokizu accuses her of sleeping with his father when he was in prison.

Enokizu travels to Tokyo. He tricks the mother of a young defendant into giving him the bail money for her son. Escaping, he befriends a lawyer who lives alone. He kills the lawyer and uses his apartment. He sends some money to Haru, and travels back to her place. Haru's mother is a convicted murderer who has recently been released from prison. Haru had lost her job, and had to run the seedy inn because she could not find other work. Haru and her mother realise that "the Professor" is the wanted man. Enokizu kills both Haru and her mother and pawns their goods. A prostitute (Toshie Negishi) sees the pawnbroker going to the inn and decides to go to the police.

Five years later, Enokizu has been executed. His father and wife go to the top of a mountain to scatter his ashes. They throw the bones into the air but the bones remain hanging in the air.

Jasper Sharp says "Both seducing and repelling with its unusual story and grisly humour, Imamura uncovers a seedy underbelly of civilised Japanese society." [3] Roger Ebert, in his original 1980 review, called the movie " a cry of despair and hopelessness on behalf of its insane hero." [4] Ebert later reviewed the movie for his Great Movies series, where he says "This portrait of a cold-blooded serial killer suggests a cruel force without motivation, inspiration, grievance." [5]

The Singing Detective is a 2003 American musical crime comedy film directed by Keith Gordon and loosely based on the BBC serial of the same name, a work by British writer Dennis Potter. It stars Robert Downey Jr. and features a supporting cast that includes Katie Holmes, Adrien Brody, Robin Wright Penn, Mel Gibson and Carla Gugino as well as a number of songs from the 1950s.

Miyamoto Musashi (宮本武蔵) is a 1954 Japanese film by Hiroshi Inagaki starring Toshiro Mifune. Shot in Eastmancolor, it is the first film of Inagaki's Samurai Trilogy of historical adventures. 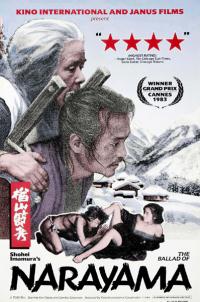 The Ballad of Narayama is a 1983 Japanese film by director Shōhei Imamura. It stars Sumiko Sakamoto as Orin, Ken Ogata, and Shoichi Ozawa. It is an adaptation of the book Narayama bushikō by Shichirō Fukazawa and slightly inspired by the 1958 film directed by Keisuke Kinoshita. Both films explore the legendary practice of obasute, in which elderly people were carried to a mountain and abandoned to die. Imamura's film won the Palme d'Or at the 1983 Cannes Film Festival.

Mitsuru Ogata is a Japanese voice actor. He is affiliated with Mausu Promotion.

Ryō Tamura is a Japanese actor from Kyoto. His father was silent-film star Tsumasaburo Bando. With his elder brothers, the late Takahiro and Masakazu, he is one of the Three Tamura Brothers.

In Island of Exiles is a 2007 detective novel by I. J. Parker. The story follows Sugawara Akitada, who is assigned by two shadowy officials to investigate the fatal poisoning on penal colony on Sado Island of the exiled and disgraced Prince Okisada. The suspect is the son of the local governor, the officials thought he might have been framed as part of a treasonous plot. Akitada is forced to carry out an undercover investigation, taking on the guise of a convict sentenced to exile on the island. It becomes a perilous task, as the convicts on the island were treated "cheaper than dirt", expendable slaves to work the mines.

My Sons is a 1991 Japanese film directed by Yōji Yamada. It was chosen as Best Film at the Japan Academy Prize ceremony.

A Fugitive from the Past is a 1965 Japanese film starring Rentarō Mikuni and Ken Takakura and directed by Tomu Uchida. It is a detective story based on the novel Kiga Kaikyo (1962) by Tsutomu Minakami. The film is also known as "Straits of Hunger" or "Hunger Straits" in English.

Black Bullet is a Japanese light novel series written by Shiden Kanzaki and illustrated by Saki Ukai, published under ASCII Media Works's Dengeki Bunko imprint. The series began publication on July 10, 2011, and 7 volumes have been published as of January 2020. A manga series began serialization on August 27, 2012 in ASCII Media Works's Dengeki Maoh. An anime television series adaptation animated by Kinema Citrus and Orange was announced at Dengeki Bunko's Autumn Festival 2013 on October 6, 2013. It aired from April 8, 2014 to July 1, 2014, and was simulcast outside Japan by Crunchyroll. The Black Bullet franchise was localized in three countries by several companies: the anime was licensed by Sentai Filmworks for North America, Animatsu Entertainment for the United Kingdom, and Hanabee for Australia. Both the manga and light novel series are published in North America by Yen Press.

Onihei Hankachō (鬼平犯科帳) is a Japanese television jidaigeki or period drama that was broadcast from 1989 to 2016. It is based on Shōtarō Ikenami's novel of the same title. Kichiemon Nakamura plays Heizō Hasegawa. Kichiemon Nakamura`s father Matsumoto Kōshirō VIII also played same role in 1969. In 1995 the drama made into a movie.(Onihei's Detective Records directed by Yoshiki Onoda.)

The Forest of Love is a Japanese crime-thriller film by Sion Sono. The film was inspired by the murders, torture and extortion committed in Kyushu, Japan from the mid-1990s to the early 2000s by convicted serial killer Futoshi Matsunaga. The film premiered on October 11, 2019 on Netflix. An extended cut 7-episode limited series version, titled The Forest of Love: Deep Cut was also released.

Boyhooda.k.a.A Record of Youth is a 1951 Japanese drama film directed by Keisuke Kinoshita. It is based on a collection of letters by writer Isoko Hatano.

The Whole Family Works is a 1939 Japanese drama film written and directed by Mikio Naruse. It is based on a novel by Sunao Tokunaga.