One of the most important was the Viceroy of Zhili (Chihli), since it encompassed the imperial capital. Yuan Shikai, later President of Republican China, held this office.

During the Ming dynasty, the post of zongdu was originally an ad hoc appointment for military inspectors, especially along the northern border. As a temporary appointment, it had no fixed rank within the nine-rank system. It was during the Chenghua era, in 1469, that the Viceroy of Liangguang first became a regular appointment; subsequently the post gained civilian powers too, effectively uniting civil and military control in the provinces.

The Qing dynasty effectively inherited the late Ming system, wherein viceroys combined both military and civilian powers over one or more provinces. While the regularly-appointed Ming viceroys were concentrated on the northern border, against the military threat of the Mongols and Manchus, the Qing dynasty extended the system into China proper as well.

The regional viceroys, along with subordinate provinces, during the Qing dynasty were:

Chinese historians often rank the Viceroy of Zhili as the most honorable and powerful, and the Viceroy of Liangjiang as the richest of the eight.[ citation needed ] Certain provinces were not governed by any regional viceroys. These included the provinces of Shanxi, Shandong and Henan.

Besides the regional viceroys, there were also special types of viceroys, such as Viceroy of Southern Rivers and Viceroy of Eastern Rivers, who were in charge of waterways. 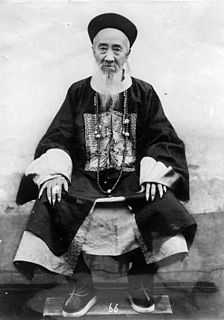 Zhang Zhidong was a Chinese official who lived during the late Qing dynasty. Along with Zeng Guofan, Li Hongzhang and Zuo Zongtang, Zhang Zhidong was one of the four most famous officials of the late Qing dynasty. Known for advocating controlled reform, he served as the Governor of Shanxi Province and Viceroy of Huguang, Liangguang and Liangjiang, and also as a member of the Grand Council. He took a leading role in the abolition of the Imperial examination system in 1905. The Red Guards destroyed his tomb in 1966 during the Cultural Revolution. His remains were rediscovered in 2007 and reburied with honors. 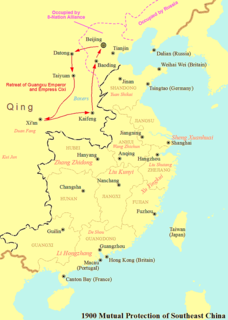 Events from the year 1661 in the Qing dynasty.