Born in Iași, he studied from 1992 at the Alexandru Ioan Cuza University in the city, [1] graduating in 1999 with an MD degree from the Grigore T. Popa University of Medicine and Pharmacy. [2] He did his residency in Romania and France, with specialization in cardiovascular and thoracic surgery. After working for over 10 years in hospitals in France, Great Britain, Denmark, Scotland, Germany, Quebec, and the United States, Costache decided to return to Romania in 2014, becoming an Associate Professor at the Lucian Blaga University of Sibiu. [1] [2] 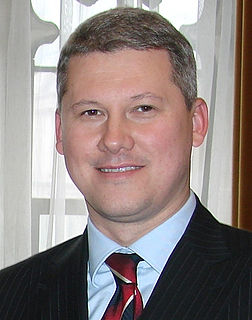 Anton Anton is a Romanian engineer and politician. A member of the Alliance of Liberals and Democrats (ALDE) and previously of the National Liberal Party (PNL), he served as Education Minister in the Călin Popescu-Tăriceanu cabinet in late 2008, and in 2018–2019 served in the Viorica Dăncilă cabinet as Energy Minister.

Gheorghe Ghidirim is a physician from Moldova and a former Health Minister of Moldova in Mircea Druc Cabinet. 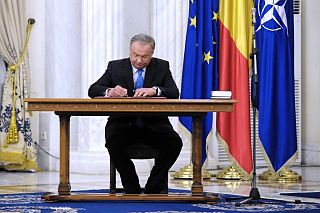 Ioan Mang is a Romanian politician and member of the Social Democratic Party. Mang served as the Education Minister in Victor Ponta's cabinet for eight days, and as a professor of Computer Science at the University of Oradea.

Mircea Buga was born on 11 September 1968 in Chișinău. He has a medical background and is a politician who was the Minister of Labour, Social Protection and Family of the Republic of Moldova from 30 July 2015 to 20 January 2016. Before, in the period 18 February 2015 to 30 July 2015 he was the Minister of Health of the Republic of Moldova, succeeding Andrei Usatîi (2011-2015). In the Strelets Government, he switched his place with Ruxanda Glavan, taking over the Ministry of Labor, Social Protection and Family and ceding the Ministry of Health. Mircea Buga has also been the General Director of the National Health Insurance Company, and by that time, he was Deputy Minister of Health (2007-2009). 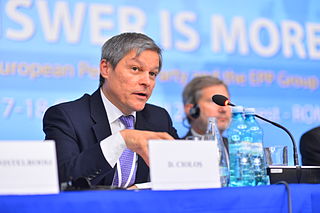 The Cioloș Cabinet was the 125th Government of Romania. It was led by Dacian Cioloș, who was appointed Prime Minister of Romania on 10 November 2015, after the resignation of Victor Ponta amid mass protests against generalised corruption linked to the Colectiv nightclub fire. It consisted of 21 ministers. No member of the Cabinet was formally affiliated with a political organisation, making the Cioloș Cabinet the first entirely politically independent cabinet in Romanian history, made up of only technocrats.

The diluted disinfectants crisis in Romania of 2016 characterized a critical time in the evolution of the national health system, arose as a result of researching nonconformities in relation to legal rules, parameters of products disinfectants purchased and used in medical institutions in Romania.

Ioan "Ionuț" Vulpescu is a Romanian politician. A member of the Chamber of Deputies for the Social Democratic Party (PSD) since 2012, he was the Minister of Culture in the Fourth Ponta Cabinet from 17 December 2014 to 17 November 2015 and has held the position again since 4 January 2017. 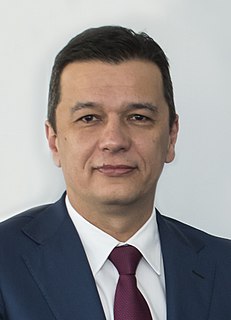 Sorin Mihai Grindeanu is a Romanian politician who served as Prime Minister of Romania from January to June 2017 when he was removed by a motion of no confidence adopted by Parliament. 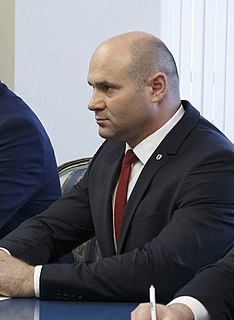 Pavel Voicu is a Moldovan politician who was the Minister of Defence of Moldova in the Sandu Cabinet and the Interior Minister under President Igor Dodon and Prime Minister Ion Chicu. He was also a personal advisor to Dodon. He has prior experience in Moldovan law enforcement. 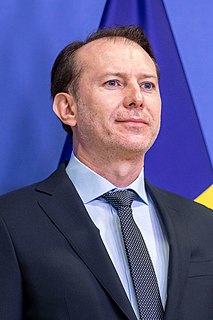 Florin Vasile Cîțu is a Romanian politician who currently serves as the Prime Minister of Romania and as the president of the National Liberal Party (PNL). Previously, he also served as Minister of Public Finance in both the first and second cabinet of former PNL Prime Minister Ludovic Orban between 2019 and 2020. As of 5 October 2021, Florin Cîțu and his government have been ousted by a motion of no confidence adopted by Parliament. He will continue to serve in a caretaker capacity until a new government is sworn in. 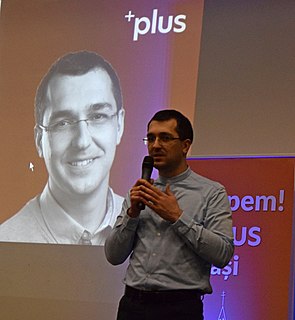 Vlad Vasile Voiculescu is a Romanian politician and former Romanian Minister of Health in the Cîțu Cabinet whose term lasted from 23 December 2020 until he was revoked on 14 April 2021 by PNL Prime Minister Florin Cîțu. He formerly served in the same position in the Cioloș Cabinet between May 2016 and January 2017.

Nicolae Hortolomei was a Romanian surgeon, director of the Surgery and Urology Clinic at Colțea Hospital in Bucharest, professor at the Faculty of Medicine, titular member of the Romanian Academy, and Minister of Health.

Nicolae Ionel Ciucă is a Romanian politician and retired general of the Romanian Land Forces. Ciucă has participated in several wars, including one in Iraq, where his performance was highly notable. He was the Chief of the Romanian General Staff from 2015 to 2019, and since 4 November 2019, he is the Minister of Defence. He briefly led a caretaker government between 7 and 23 December 2020, in the aftermath of Prime Minister Ludovic Orban's resignation.

Corneliu Popovici is a Moldovan politician. He served as Minister of Education, Culture and Research from 14 November 2019 to 16 March 2020 in the cabinet of Prime Minister Ion Chicu.

Viorica Dumbrăveanu is a Moldovan politician. She served as Minister of Health, Labour and Social Protection from 14 November 2019 to 31 December 2020 in the cabinet of Prime Minister Ion Chicu.

Ala Nemerenco is a Moldovan physician and politician. As of 6 August 2021, she serves as Minister of Health in the cabinet of Prime Minister Natalia Gavrilița.

The next Romanian legislative elections must be held at the latest before 21 March 2025, which is three months after the term of the incumbent legislature of the Romanian Parliament expires.

Ioana Mihăilă is a Romanian politician and endocrinologist from USR PLUS, who has been the Minister of Health of Romania since 21 April 2021. Being specialized in endocrinology since 2010, she is a member of the Romanian Endocrinology Society.