Nigeria, officially the Federal Republic of Nigeria, is a federal republic in West Africa, bordering Niger in the north, Chad in the northeast, Cameroon in the east, and Benin in the west. Its coast in the south is located on the Gulf of Guinea in the Atlantic Ocean. The federation comprises 36 states and 1 Federal Capital Territory, where the capital, Abuja, is located. The constitution defines Nigeria as a democratic secular country.

Tinsel is a Nigerian soap opera that began airing in August 2008. On May 23, 2013, the show's 1000th episode aired. It has been called "the most successful television drama on Nigerian television in recent times".

He was born in Lagos in 1952. He studied at the University of Ibadan, Obafemi Awolowo University and Rockets University, United States. [2]

He began his career as an actor when he joined the University of Ibadan theatre group, where he met other artistes, such as Professor Wole Soyinka and Jimi Solanke among others. He became an actor at the age of 15 years through a teacher who was a member of the Ori Olokun Theatre group in the early 70's, prior to the death of his father. [3] After his father died, he traveled to the United States of America in 1978 but returned to Nigeria in 2002 to continue his career in acting. He became more popular in 2013 after his leading role in a Nigerian Soap opera, Tinsel that began airing in August 2008. [4] The veteran actor was involved in a motor accident in October 2016 and suffered nervous system injury . He was driving to a movie set when the accident took place around Apple Junction, in Festac, Lagos.

The University of Ibadan (UI) is the oldest Nigerian university, and is located five miles from the centre of the major city of Ibadan in Western Nigeria. It is popularly known as Unibadan or UI. 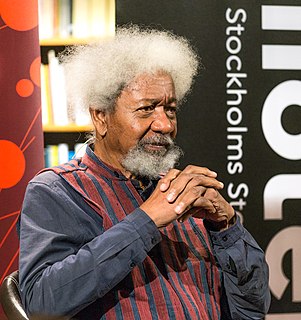 Akinwande Oluwole Babatunde Soyinka (Yoruba: Akinwándé Oluwo̩lé Babátúndé S̩óyinká, known as Wole Soyinka, is a Nigerian playwright, poet and essayist. He was awarded the 1986 Nobel Prize in Literature, the first African to be honoured in that category. 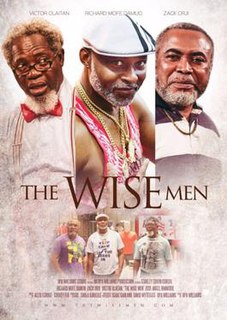 Richard Mofe-Damijo is a Nigerian actor and former Commissioner for Culture and Tourism in Delta State. In 2005 he won the Africa Movie Academy Award for Best Actor in a Leading Role. 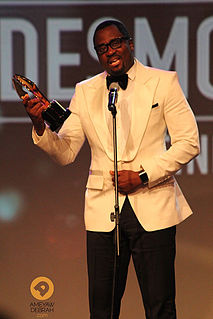 Desmond Elliot is a Nigerian actor, director, and politician who has starred in over two hundred films and a number of television shows and soap operas. He won best supporting actor in a drama at the 2nd Africa Magic Viewers' Choice Awards and was nominated for best supporting actor at the 10th Africa Movie Academy Awards. He was elected as a lawmaker of the Lagos State House of Assembly, Surulere Constituency, in the 11 April 2015 Nigerian General Elections.

Damilola Adegbite is a Nigerian actress, model, and television personality. She played Thelema Duke in the soap opera Tinsel, and Kemi Williams in the movie Flower Girl. She won Best Actress in a TV Series at the 2011 Nigeria Entertainment Awards.

Alex Usifo is a Nigerian actor.

Babatunde Omidina is a Nigerian actor and comedian popularly known as Baba Suwe.

Kola Oyewo is a Nigerian veteran actor, dramatist and scholar.

Akin Lewis is a Nigerian film actor, director and producer.

Blossom Chukwujekwu is a Nigerian actor, who made his professional acting debut in 2009. In 2015 he won the Best Supporting Actor Award at the Africa Magic Viewers Choice Awards.

Albert Egbe is a Nigerian actor known for his role as Mr. B. in the comedy series, Basi and Company. He was an elected executive member of the Pan African Federation of Filmmakers Congress in 2006. After, Basi & co, he later built a career in entertainment by producing short films and television movies, many of which are adaptations of literary works by Nigerian writers.

Abiola Segun Williams is a Nigerian actress popularly known as Titi K on her role in TV Soap Tinsel.

Timini Egbuson is a Nigerian actor, model and presenter. He was born in Bayelsa State. He's a graduate of psychology from University of Lagos.. He became notable in 2013 after he played Tobi in the television series Shuga. He hosted GT Bank's Fashion week red carpet alongside Sharon Ooja in 2017.

Kunle Remi is an award-winning Nigerian actor best known for his roles in Falling, Family Forever and Tinsel. He came to prominence in 2010 after winning the 7th edition of Gulder Ultimate Search in 2010. He is a graduate of the New York Film Academy.