Last updated January 08, 2021
Not to be confused with the Victoria women's cricket team.

It was known as the Victorian Bushrangers between 1995 and 2018, before dropping the Bushrangers nickname and electing to be known as simply Victoria in all cricket competitions. [1] Victoria shares home matches between the Melbourne Cricket Ground in East Melbourne and the Junction Oval in St Kilda. The team is administered by Cricket Victoria and draws its players from Victoria's Premier Cricket competition and throughout the country. Victoria also played in the now-defunct Twenty20 competition, the Twenty20 Big Bash, which was replaced by the franchise-based Big Bash League.

The Victorian cricket team is the second-most successful state team in Australian first-class cricket, having won 32 Sheffield Shield titles, the most recent of which was in the 2018–19 season. The Victorians have also claimed six One-Day Cups and four Big Bash tiles.

The team's origins date back to the very start of Australian cricket when the Melbourne Cricket Club (MCC) was formed in 1838, and in that same year an MCC team played its first match against the Victorian Military. However, the first official inter-colonial (now interstate) game was contested between Port Phillip and Van Diemen's Land in 1851, in Launceston. [2]

Victoria was the dominant force in the early days of Australian first-class cricket, winning two of the first three Sheffield Shield tournaments, and most of its early domestic friendly games against the other states. The first game between the great rivals Victoria and New South Wales was played at the Melbourne Cricket Ground (MCG) in 1856.

The annual Sheffield Shield tournament first began in the 1892/93 season, contested by Victoria, New South Wales and South Australia. Victoria won that tournament by defeating both opponents twice each. During the history of the Shield, Victoria has won the competition 32 times, most recently in the 2018/19 season.

The Victorian Cricket Association, now Cricket Victoria, was founded in 1895 and since March 2018 has been based at its headquarters, the Junction Oval in St Kilda.

The tradition of starting a cricket match at the MCG on Boxing Day also featured Victoria when they played New South Wales in 1965.

Throughout its history, Victoria's dominant colour has been navy blue, either in full when playing One-Day or Twenty20 competitions or on predominantly white kits in first-class cricket. The team logo replicates that of Cricket Victoria and has done so since the organisation chose to cease referring to the Bushrangers nickname when describing the men's team. [1] The current major sponsor of the team is the CitiPower. [5]

Squad for the 2019/20 domestic season. Players with international caps are listed in bold.

The Melbourne Cricket Ground (MCG), also known colloquially as "The G", is an Australian sports stadium located in Yarra Park, Melbourne, Victoria. Founded and managed by the Melbourne Cricket Club, it is the largest stadium in the Southern Hemisphere, the 11th largest globally, and the second largest cricket ground by capacity after Motera Stadium. The MCG is within walking distance of the city centre and is served by Richmond and Jolimont railway stations, as well as the route 70 tram. It is adjacent to Melbourne Park and is part of the Melbourne Sports and Entertainment Precinct. 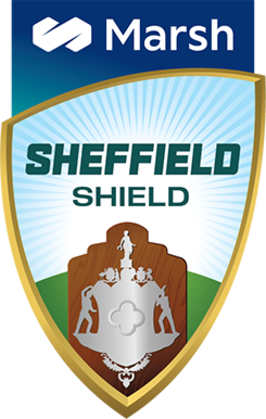 The Sheffield Shield is the domestic first-class cricket competition of Australia. The tournament is contested between teams from six states of Australia. Prior to the Shield being established, a number of intercolonial matches were played. The Shield, donated by Lord Sheffield, was first contested during the 1892–93 season, between New South Wales, South Australia and Victoria. Queensland was admitted for the 1926–27 season, Western Australia for the 1947–48 season and Tasmania for the 1977–78 season. 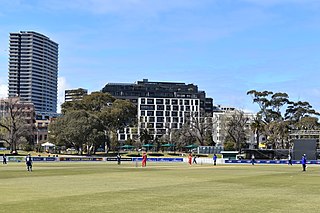 Junction Oval is a historic sports ground in the suburb of St Kilda in Melbourne, Victoria, Australia. Its location near the St Kilda Junction gave rise to its name. It is located approximately five kilometres from the centre of Melbourne and is in the southernmost part of the large Albert Park sporting precinct. 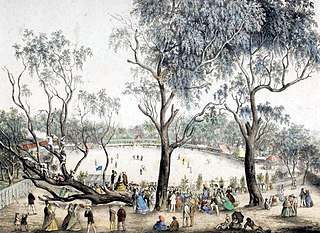 Intercolonial cricket matches were the first-class cricket matches played between the various colonies of Australia prior to federation in 1901. After federation, they became known as Interstate matches. By the 1880s regular intercolonials were being played, generally with intense rivalry. Matches against visiting professional teams from England also attracted public interest. 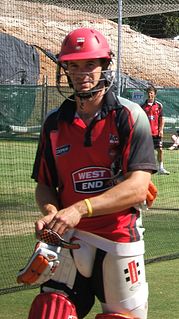 Michael Klinger is an Australian former first-class cricketer, who held the record for the most runs scored in the Big Bash League when he retired in 2019.

Victorian Premier Cricket is a club cricket competition in the state of Victoria administered by Cricket Victoria. Each club fields four teams of adult players and usually play on weekends and public holidays. Matches are played on turf wickets under limited-time rules, with most results being decided on a first-innings basis. Outstanding players in the competition are selected to play for the Victorian Bushrangers at first-class and List A level, in the Sheffield Shield and Marsh One Day Cup competitions respectively. The competition commenced in the 1906–07 season when it was known as "District cricket", and was renamed in 1990. Separate competitions for one-day matches (2002–03) and Twenty20 (2005–06) were later established.

The state of Victoria, Australia, has a strong sporting culture and includes many popular sports. 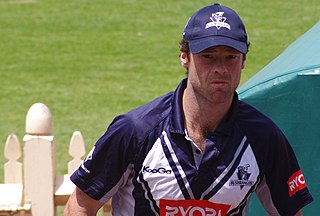 Robert John Quiney is a former Australian cricketer. He played domestic first class and List A cricket for the Victorian Bushrangers side, and domestic Twenty20 cricket for the Melbourne Stars, Auckland Aces, Uthura Rudras and Rajasthan Royals. He was a left-handed batsman who also bowled right-arm medium pace. He played his last game for the Melbourne Stars on 27 January 2018, after which he retired from professional cricket.

The 2009–10 Sheffield Shield season is the 108th season of official first-class domestic cricket in Australia. The season began on 13 October 2009. The Victorian Bushrangers were the winners of the competition, defeating the Queensland Bulls by 459 runs in the final held from 17–21 March 2010 at the Melbourne Cricket Ground

Nicolas James Maddinson is an Australian cricketer. He is a left-handed opening batsman who has represented Australia in both Test matches and Twenty20 Internationals. Domestically he plays for the Victoria cricket team and the Melbourne Stars in the Big Bash League, previously having played for New South Wales and Sydney Sixers.

The Melbourne Renegades are an Australian professional men's Twenty20 franchise cricket team based in the Australian state of Victoria. They compete in the Australian Twenty20 cricket competition, the Big Bash League. The Renegades play their home matches at Marvel Stadium, in Melbourne's Docklands precinct, whilst also using Geelong's GMHBA Stadium for home matches. The team is coached by Michael Klinger and captained by Aaron Finch. Melbourne Renegades won their first title in BBL08 when they defeated their arch rivals the Melbourne Stars at Marvel Stadium. However, results for the team has since dramatically dropped leading to calls from fans to relegate the side to a 2nd division. Some of the Renegades most important players from their inception to date, have been Aaron Finch, Sam Harper, Cameron White, Beau Webster, Tom Cooper, Ben Rohrer, Mohammad Nabi, Dwayne Bravo, Cameron Boyce, Kane Richardson and Nathan Rimmington. 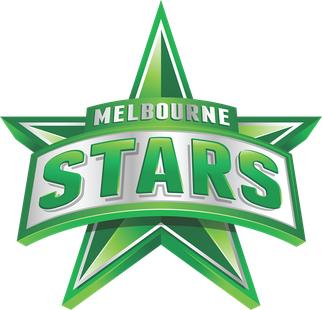 The Melbourne Stars is an Australian Twenty20 franchise cricket team, based in Melbourne, Victoria that competes in Australia's Twenty20 competition, the Big Bash League. The Stars wear a green uniform and play their home matches at the Melbourne Cricket Ground. One of their longest-serving players, Marcus Stoinis, recently achieved the highest individual score in Big Bash League history, scoring 147* against the Sydney Sixers at the MCG.

William David Sheridan is an Australian cricketer who has played domestically for Victoria and the Melbourne Renegades. 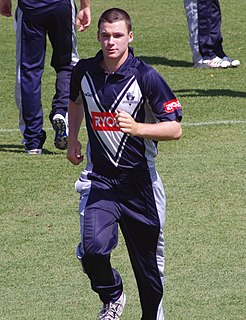 Peter Stephen Patrick Handscomb is an Australian cricketer who is the current captain for Victoria and Middlesex.