Viktor Röthlin (born October 14, 1974 in Kerns, Obwalden) is a Swiss former long-distance runner, who specialized in the marathon.

Röthlin attempted no marathons in 2009, because he contracted thrombosis during a flight from the United Arab Emirates in the Spring of 2009, which led to a pulmonary embolism and fluid buildup in his chest; the condition was treated with rest and medication. [2]

Röthlin retired from competitive marathon running in 2014, after finishing fifth at the European Championships in Zürich. [4] [5] 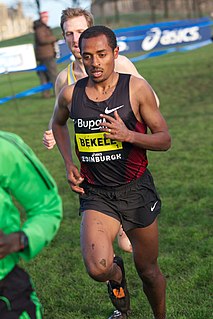 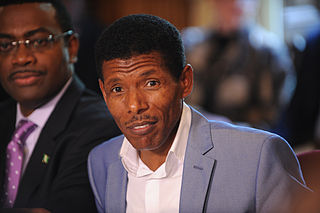 Dathan Ritzenhein is an American long-distance runner. He held the American record in the 5,000 metres (12:56.27) from 2009-2010, when it was broken by Bernard Lagat. He is a three-time national cross country champion with wins at the USA Cross Country Championships in 2005, 2008 and 2010. Formerly a Nike athlete for the majority of his professional career, Dathan joined the Hansons-Brooks Distance Project team in 2017 and has been sponsored by Brooks since then. 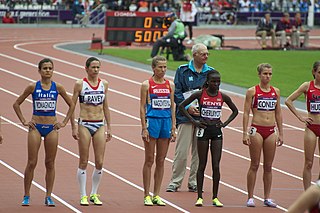 Joanne Marie Pavey MBE is a British long-distance runner and a World, European, Olympic and Commonwealth medallist. She won the 10,000 m gold medal at the 2014 European Championships in Zürich, ten months after giving birth to her second child, to become the oldest female European champion in history at the age of 40 years and 325 days. She is coached by her husband and manager Gavin Pavey, with whom she has two children. 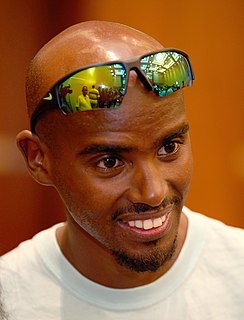 Sir Mohamed Muktar Jama Farah, is a British distance runner. The most successful British track athlete in modern Olympic Games history, he is the 2012 and 2016 Olympic gold medalist in both the 5000 m and 10,000 m. Farah is the second athlete in modern Olympic Games history, after Lasse Virén, to win both the 5000 m and 10,000 m titles at successive Olympic Games. He also completed the 'distance double' at the 2013 and 2015 World Championships in Athletics. He was the second man in history, after Kenenisa Bekele, to win long-distance doubles at successive Olympics and World Championships, and the first in history to defend both distance titles in both major global competitions – a feat described as the 'quadruple-double'. Since finishing 2nd in the 10,000 metres at the 2011 World Championships in Athletics, Farah had an unbroken streak of ten global final wins. The streak ended in Farah's final championship track race, when he finished second to Ethiopia's Muktar Edris in the 2017 5000 metres final. In his final track race, the 2017 Diamond League Final in Zurich in August 2017, Farah gained his revenge, edging out world champion Edris to win his only IAAF Diamond League title at 5000 metres.

Christian Belz is a Swiss long-distance runner. He was initially a steeplechaser and represented Switzerland in the event at the World Championships in Athletics in 1999 and 2001 as well as the 2000 Summer Olympics. He broke the national record with a run of 8:22.24 in June 2001. Later that year he won two bronze medals at the 2001 Summer Universiade.

Yoshimi Ozaki is a Japanese long-distance runner, who specializes in the marathon. She won the 2008 Tokyo Women's Marathon in a personal best time of 2:23:30 hours. A year later she took the silver medal in the event at the 2009 World Championships in Athletics.

The men's marathon at the 2010 European Athletics Championships was held on the streets of Barcelona on 1 August. 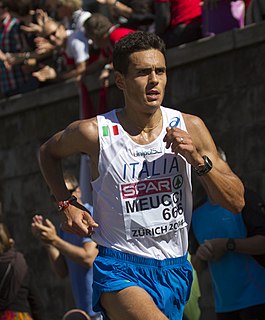 Dmitriy Olegovich Safronov is a Russian long-distance runner who specialises in marathon running.

Carles Castillejo Salvador is a Spanish long distance runner. He has won Spanish national titles in the 5000 m, the 10,000 m and the marathon. He has represented Spain at the Olympics on four occasions.

Hitomi Niiya is a Japanese long-distance runner who competes in track, cross country running and marathon races. Niiya competed for Japan at the 2012 Summer Olympics. She is a two-time silver medallist at the Asian Athletics Championships and has represented Japan three times at the World Athletics Championships. She represents Team Toyota Industries in national competition.

Dino Sefir Kemal is an Ethiopian long-distance runner. He is one of three members of the Ethiopian team competing in the marathon at the 2012 Summer Olympics in London, United Kingdom. He qualified with a time of 2:04:50 at the 2012 Dubai Marathon, one of the top five personal records among the marathon entrants at the 2012 Olympics. He is coached by Renato Canova. 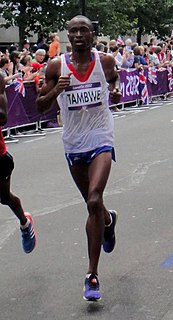 Patrick Tambwé is a Congolese-born French long-distance runner. At the 2012 Summer Olympics, he competed in the Men's marathon, but did not finish.

Tadesse Abraham is an Eritrea-born Swiss long distance runner who specialises in the marathon.