He took 7th at Breslau 1889 (the 6th DSB Congress, Hauptturnier A won by Emanuel Lasker), and won ahead of Dawid Janowski and Moritz Porges at Carlsbad 1902 (Triangular). [2] 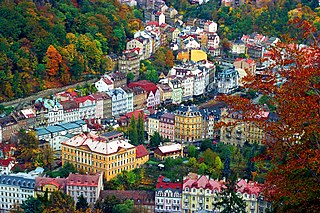 Karlovy Vary is a spa town situated in western Bohemia, Czech Republic, on the confluence of the rivers Ohře and Teplá, approximately 130 km (81 mi) west of Prague (Praha). It is named after Charles IV, Holy Roman Emperor and King of Bohemia, who founded the city in 1370. It is the site of numerous hot springs, and is the most visited spa town in the Czech Republic. Until 1945, when the German-speaking inhabitants were expelled, the town was overwhelmingly German speaking for most of its history. The city has approximately 48,500 inhabitants. 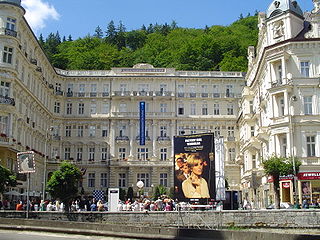 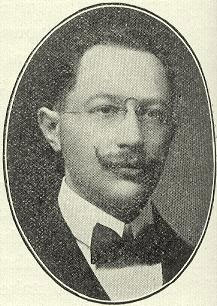 Karel Treybal was a prominent Czech chess player of the early twentieth century.

Velká Dobrá is a village in the Central Bohemian Region of the Czech Republic.

Věra Suchánková-Hamplová was a Czech pair skater who competed internationally for Czechoslovakia. With her skating partner, Zdeněk Doležal, she was the 1958 World silver medalist and a two-time European champion. They represented Czechoslovakia at the 1956 Winter Olympics and placed 8th.

The first International Prague Chess Tournament was held in honour of the sixtieth anniversary of Franz Joseph I of Austria's elevation as monarch to the Austria-Hungary Empire. Twenty great masters played in the pavilion of the Chamber of Commerce and Trade in Prague, from May 17 to June 13, 1908.

The third international chess tournament was held in the health resort of Carlsbad, Czechoslovakia. The eighteen participants, under the direction of Viktor Tietz, played their games in the Helenenhof Imperial Hotel, from April 27 to May 22, 1923. 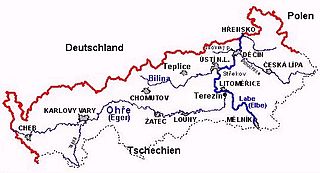 André Mattoni was an Austrian actor.

Waldemar Fritsch was a Sudeten-German porcelain sculptor and ceramist, who lived and worked in Ansbach, Germany after his expulsion from West Bohemia in 1946.