Vilana (Greek : Βηλάνα) is a white Greek wine grape variety planted primarily in Crete. The grape is a difficult one to cultivate and produces delicate wines rarely seen outside Greece. [1] 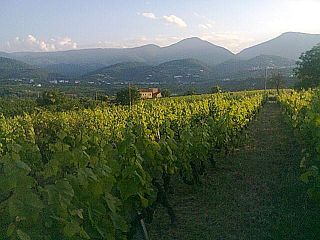 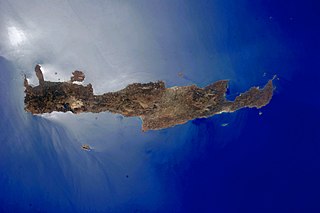 Vilana is also known under the synonyms Belana and Velana. [2] 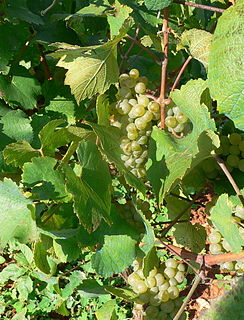 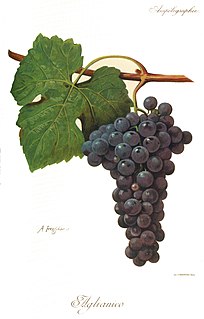 Aglianico is a black grape grown in the southern regions of Italy, mostly Basilicata and Campania. 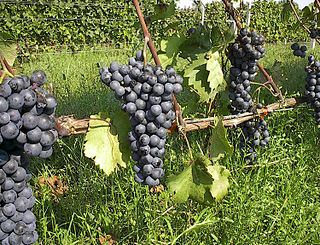 Agiorgitiko is a red Greek wine grape variety that, as of 2012, was the most widely planted red grape variety in Greece, ahead of Xynomavro. The grape has traditionally been grown in the Nemea region of the Peloponnese but can be found throughout the country including Attikí (Attica) and Makedonía (Macedonia). 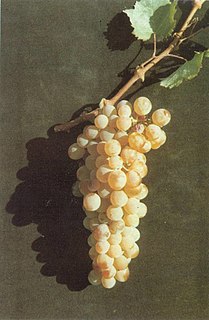 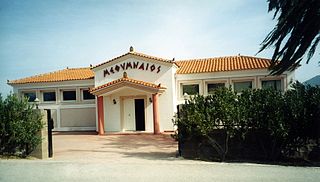 Lesbos wine is wine made on the Greek island of Lesbos in the Aegean Sea. The island has a long history of winemaking dating back to at least the 7th century BC when it was mentioned in the works of Homer. During this time the area competed with the wines of Chios for the Greek market. An apocryphal account details one of the brothers of the poet Sappho as a merchant trading Lesbos wine with the Greek colony of Naucratis in Egypt. The most noted Lesbos wine was known as Pramnian which draws similarities today to the Hungarian wine Eszencia. The popularity of Lesbos wine continued into Roman times where it was highly valued along with other Aegean wines of Chios, Thasos and Kos.

Ribolla Gialla is a white Italian wine grape grown most prominently in the Friuli-Venezia Giulia region of northeast Italy. The grape is also found in Slovenia where it is known as Rebula. In Friuli, the grape thrives in the region around Rosazzo and Gorizia. In Slovenia, the grape is grown prominently in the Brda region. The grape is not related to the Friuli red wine grape Schioppettino, which is also known as Ribolla Nera. The obscure, lower quality Ribola Verde grape is a mutated version that is not widely used.

Robola is a white Greek wine grape variety that is grown primarily on the Ionian island of Cephalonia. Historically the vine was thought to be the same variety as the Friuli wine grape Ribolla and was thought to have been brought to northeast Italy by Venetian merchants trading with Cephalonia in the 13th century. However, DNA profiling in the 21st century has cast doubt on that theory and today Robola is classified by the Vitis International Variety Catalogue (VIVC) as a separate variety. 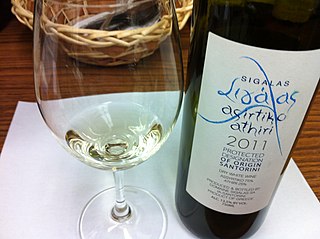 Athiri or Athiri Aspro is a white Greek wine grape used to make Retsina on the island of Rhodes.

Dimyat is a white Bulgarian wine grape. It is one of Bulgaria's most widely planted white grape varieties, second only to Rkatsiteli. Wines made from this variety are noted for their perfume aromas. While some ampelographers believe that the variety is indigenous to Bulgaria, legends have developed around Dimiat being named after a town in the Nile Delta and was brought back to Europe by Crusaders in the Middle Ages.

Mandilaria is a red Greek wine grape variety that is grown throughout the Greek Isles. The grape is often used as a blending component, producing deeply colored wines that are light bodied.

Aidini is a white Greek wine grape variety that is grown primarily on the island of Santorini but it can also be found on other Greek isles in the Aegean Sea. The grape is known for its floral aroma and is used mainly in winemaking as a blending partner with grapes such as Athiri to make dry wines.

Vilana is a white Greek wine grape variety. Vilana may also refer to

Vidiano is a white Greek wine grape variety indigenous to Crete, considered as an emerging star of the island's wines. It is a high-quality wine with moderate acidity, and complex aromas reminiscent of peach, apricot, melon honey and herbs. The grape is difficult to cultivate and is grown in small scale, primarily in Rethymno and secondarily around Heraklion. It thrives in modest fertility, dry, calcareous and well-drained soils. The berries rippen early and have thick skin. Vidiano is moderately resistant to downy mildew and sensitive to powdery mildew. It is genetically close to thrapsathiri and vilana.

Thrapsathiri is a white Greek wine grape variety that abounds in Crete. The grape is highly resistant to drought, ripens late and produces very aromatic wines with soft acidity. In the past, trapsathiri used to be blended with vilana, but nowadays it is increasingly vinified on its own.