Born in Portumna, [2] Galway, the younger of twins, O’Donoghue was the son of an RIC man, and grew up in a variety of places in Ireland. Although a member of the RIC, his father participated in GAA games, usually under assumed names, [2] and O’Donoghue recalls playing hurling from an early age: at age four, while hurling, his twin brother was almost killed in a weight throwing accident. [2]

As an engineering student in UCC, O’Donoghue joined the Cork 1 Brigade of the IRA as its engineer, and took prominent part in the War of Independence, while his twin brother James joined the RIC. [3] O’Donoghue worked closely with Michael O’Neill, [4] whose killing lead to the Dunmanway killings; O’Donoghue's witness statement was later used to deny any sectarian motivation in the killings. [3]

He was involved in the administration of the GAA, becoming chairman of Waterford county committee from 1936 to 1946 and again in 1948. He strongly opposed the decision to hold the 1947 All-Ireland Football final in New York, arguing that it would encourage emigration. [1]

He died in May 1972 and is buried in St Carthage's Cemetery, Lismore, Co Waterford. [5]

This article incorporates text available under the CC BY 3.0 license.

Samuel Maguire was an Irish republican and Gaelic football player. He is chiefly remembered as the eponym of the Sam Maguire Cup, given to the All-Ireland Senior Champions of Gaelic football each year. 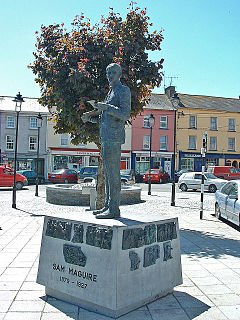 Dunmanway is a market town in County Cork, in the southwest of Ireland. It is the geographical centre of the region known as West Cork. It is the birthplace of Sam Maguire, an Irish Protestant republican, for whom the trophy of the All-Ireland Senior Football Championship is named.

Cornelius "Con" Murphy was an Irish hurler who played as a full-back for the Cork senior team.

Daniel Shanahan is an Irish hurling selector and former player. He has been a selector with the Waterford senior team since 2013.

Jerry O'Connor is an Irish hurler who played as a midfielder for the Cork senior team. He is regarded as one of the greatest players of his generation.

Paul Curran is an Irish hurler who played as a full-back for the Tipperary senior team.

Gerald McCarthy is an Irish retired hurler and manager who played as a midfielder for the Cork senior team.

Dohenys is a Gaelic Athletic Association club, fielding Gaelic football and Hurling teams in the town of Dunmanway, County Cork, Ireland. It won its only Cork Senior Club Football Championship in 1897. Other titles won include 2 Cork Intermediate Football Championships in 1972 and 1995, and 3 Cork Junior Football Championships in 1935, 1966, and 1993. In 2007, the club won its first ever county hurling championship when it won the Cork Junior B Hurling Championship. The club is part of the Carbery division of Cork. The Sam Maguire Cup which is presented to the All-Ireland winning football team each year is named after Dunmanway's most famous son, Sam Maguire who is buried in St. Mary's Graveyard.

The Dunmanway killings, also known as the Dunmanway murders or the Dunmanway massacre, refers to the killing of thirteen Protestant men and boys in and around Dunmanway, County Cork, between 26–28 April 1922. This happened in a period of truce after the end of the Irish War of Independence and before the outbreak of the Irish Civil War in June 1922. All the dead and missing were Protestants, which has led to the killings being described as sectarian. Six were killed as purported British informers and loyalists, while four others were relatives killed in the absence of the target. Three other men were kidnapped and executed in Bandon as revenge for the killing of an IRA officer Michael O'Neill during an armed raid. One man was shot and survived his injuries.

Brendan Cummins is an Irish retired hurler who played as a centre-forward for the Cork senior team.

Éamonn O'Donoghue is an Irish former sportsperson. He played hurling with his local club Blackrock and was a member of the Cork senior inter-county team from 1974 until 1983.

Thomas O'Donoghue was an Irish hurler. His career included stints with club sides Mayfield and Sarsfields, while he was also an All-Ireland Championship winner with the Cork senior hurling team in 1966.

John Buckley is an Irish former sportsperson. He played hurling with his school, the North Monastery, his local club Glen Rovers and was a member of the Cork senior inter-county team from 1982 until 1986.

Seán O'Hegarty was a prominent member of the Irish Republican Army in County Cork during the Irish War of Independence. He served as O/C of the Cork No. 1 Brigade of the IRA after the deaths of Tomás Mac Curtain and Terence MacSwiney. 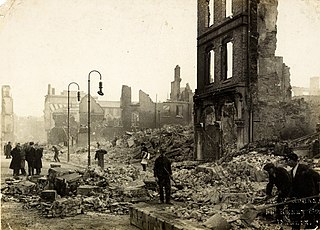 The burning of Cork by British forces took place on the night of 11–12 December 1920, during the Irish War of Independence. It followed an Irish Republican Army (IRA) ambush of a British Auxiliary patrol in the city, which wounded twelve Auxiliaries, one fatally. In retaliation, the Auxiliaries, Black and Tans and British soldiers burned homes near the ambush site, before looting and burning numerous buildings in the centre of Cork, Ireland's third-biggest city. Many civilians reported being beaten, shot at, and robbed by British forces. Firefighters testified that British forces hindered their attempts to tackle the blazes by intimidation, cutting their hoses and shooting at them. Two unarmed IRA volunteers were also shot dead at their home in the north of the city. 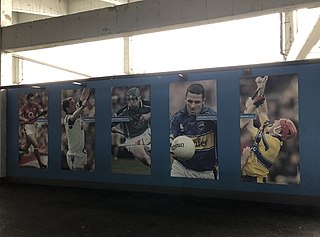 David O'Sullivan is an Irish hurler who plays for both the Waterford Inter-county hurling team and the Ballygunner GAA club. His brother Brian O'Sullivan is currently also a panel member on the Waterford Senior Hurling Team. He made his championship debut against Limerick on 12 June 2011.

Tadhg de Búrca, sometimes referred to as Tadhg Bourke, is an Irish hurler who plays for Waterford Intermediate Championship club Clashmore-Kinsalebeg and at inter-county level with the Waterford senior hurling team. He usually lines out as a centre-back having previously enjoyed a role as a sweeper.

Micheál Donoghue is an Irish hurling manager and former player who was the manager of the Galway senior hurling team from the end of 2015 until the summer of 2019.

Seán O'Donoghue is an Irish hurler who plays as a right corner-back for club side Inniscarra, divisional side Muskerry and at inter-county level with the Cork senior hurling team.