The viola caipira, often simply viola, [1] (Portuguese for country guitar) is a Brazilian ten-string guitar with five courses of strings arranged in pairs. [2] It was introduced in the state of São Paulo, where it is widely played as the basis for the música caipira, a type of folk-country music originating in the caipira country of south-central Brazil.

The origins of the viola caipira are uncertain, but evidence suggests it evolved from the vihuela/viola de mano that Spanish and Portuguese settlers took to the new world. It has also similarities with the 5 course baroque guitar, that elsewhere evolved into the modern guitar. It is likely a descendant of one of the many folk guitars that have traditionally been played in Portugal. The viola braguesa and viola amarantina, for instance, are two types of ten-string guitars from the north of Portugal, [3] which are closely related to the viola caipira.

Some have described the viola caipira as Brazil's national instrument, [4] but others argue that the tambourine-like pandeiro has a stronger claim. [5] [6] [7] [8] The Brazilian Embassy in Washington lists a national flower among the official symbols of Brazil, but no national musical instrument. [9] What is undisputed is that the viola caipira was introduced in São Paulo before the violão, and is the basis for the música caipira, or São Paulo's folk music, as Inezita Barroso states.

A large number of tunings are used; open tunings are common. [10] Unlike most steel-string guitars, its strings are plucked with the fingers of the right hand similarly to the technique used for classical and flamenco guitars, rather than by the use of a plectrum.

Violas are present in nearly all Brazilian music forms, anywhere in the country (although it is declining in some places). It most often associated with Caipira Music (Brazilian country music), with some forms of North-Eastern music and with folkloric music. It was once used to play urban music, like choro, samba and Maxixe, but has been replaced by the acoustic guitar.

A National Association of Viola Players (Associação Nacional dos Violeiros) has been founded in 2004 and the Ministry of Culture has declared the preservation of the Viola tradition as of national interest.

Samba, also known as samba urbano carioca or simply samba carioca is a Brazilian music genre that originated in the Afro-Brazilian communities of Rio de Janeiro in the early 20th century. Having its roots in Angola and in Brazilian folk traditions, especially those linked to the primitive rural samba of the colonial and imperial periods, is considered one of the most important cultural phenomena in Brazil and one of the country symbols. Present in the Portuguese language at least since the 19th century, the word "samba" was originally used to designate a "popular dance". Over time, its meaning has been extended to a "batuque-like circle dance", a dance style, and also to a "music genre". This process of establishing itself as a musical genre began in the 1910s and it had its inaugural landmark in the song "Pelo Telefone", launched in 1917. Despite being identified by its creators, the public, and the Brazilian music industry as "samba", this pioneering style was much more connected from the rhythmic and instrumental point of view to maxixe than to samba itself.

The viola is a stringed musical instrument related to the violin. Viola also may refer to:

Brazilian rock refers to rock music produced in Brazil and usually sung in Portuguese. In the 1960s it was known as "iê-iê-iê", from the Portuguese transcription of the line "Yeah, yeah, yeah" from the Beatles song "She Loves You". 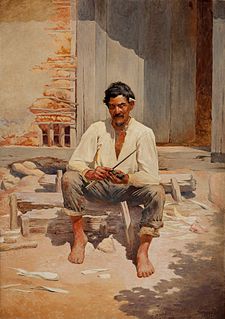 A caipira is an inhabitant of rural or remote areas in the interior of the south-central part of Brazil. Their racial origins and traditional culture is similar to those of the caiçaras, who inhabit the coastal regions of the south, and the ribeirinhos, who are riverbank dwellers in the Amazon region. 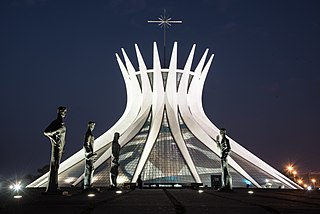 The viola de cocho is a singular plucked string instrument from Brazil. It is typical in the states of Mato Grosso and Mato Grosso do Sul and has been designated a part of Brazil's intangible national heritage by IPHAN, the Brazilian institution responsible for the preservation of the national cultural heritage. It is unusual in that although it has only three frets at most and is left unvarnished. The Portuguese word cocho, used by farm labourers, refers to a hollowed-out log forming a sort of container. The cocho is widely used, for example, to provide salt for cattle on grassland farms.

Ivan Vilela is a Brazilian composer, arranger, researcher, teacher and viola caipira player. Ivan Vilela is currently a professor at the ECA - School of Communication and Arts of the University of São Paulo. He is the director of the Orquestra Filarmônica de Violas, a Brazilian orchestra composed by Brazilian violas. Ivan Vilela is one of the main ten-string guitarists (viola) nowadays. With a special style and very developed technique, he has more than 15 albums recorded, solo or with different groups, and was nominated for and awarded several prestigious prizes in Brazil. 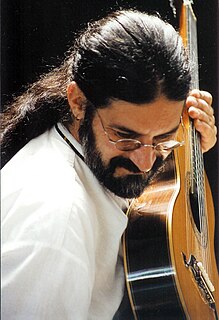 Pagode is a type of Brazilian country-folk traditional style of music. It is also known as Cipó Preto, Pagode caipira or Pagode sertanejo. Sertanejo means anything that comes from the back-country, outback or simply the countryside. This style of music was pioneered by musicians Tião Carreiro and Lourival dos Santos in the late 1950s, when they fused the "Coco" and "Calango de roda" rhythms. Although other instruments can be added, it is much characterized by its simple, acoustic approach, with the use of just one or two viola guitars, often accompanied by an acoustic guitar and, at times, a light percussion section. A structural feature commonly used in this genre is the alternation of verses sung with the accompaniment of a classical guitar, with solos of viola caipira. Pieces can be entirely instrumental or have one or two singers, usually: when there are two lead vocals, they sing together on a steady interval. The metrics used are usually of five or seven-syllable roundels, and in presentations, songs quite often are linked together, on a medley. Another notable feature are its lyrics, that tend to portray the everyday life of country people, telling stories about simple life, nature, love, booze, animals and so on.

The viola de buriti is a Brazilian stringed instrument made from the buriti palm tree. It is very lightweight, has four nylon strings and a tiny sound board and is fretless. It is found in the region of Jalapão in Tocantins and in northwest Minas Gerais.

Caipira is a Brazilian Portuguese dialect spoken in the rural areas of the State of São Paulo and adjacent parts of neighbouring Mato Grosso do Sul, Goiás, Minas Gerais, and Paraná.

Gilberto de Syllos is a Brazilian musician and has been a professional bassist and music professor for more than 30 years. Born Gilberto de Syllos Rosa in Campinas, Brazil, on 27 April 1967 he is now based in São Paulo, where he teaches music and performs as a solo artist and with a wide variety of popular Brazilian and international acts.

Renato Teixeira de Oliveira is a Brazilian singer-songwriter. He is a representative of sertanejo music and folk rock, linked to the caipira culture and dialect. Teixeira is the author of several hit songs including "Romaria", which was notably covered by Elis Regina in her eponymous 1977 album. Other hit songs by Teixeira were "Dadá Maria" and "Tocando em Frente", later sung also by Maria Bethânia. Teixeira won twice the Latin Grammy Award: in 2015 for Best Sertaneja Music Album, with Sérgio Reis, and in 2016, with Sater. His album +AR was ranked as the 44th best Brazilian album of 2018 by the Brazilian edition of Rolling Stone magazine and among the 25 best Brazilian albums of the second half of 2018 by the São Paulo Association of Art Critics.