Viorica Viscopoleanu (née Belmega on 8 August 1939) is a retired Romanian long jumper. She competed at the 1964, 1968 and 1972 Olympics and won a gold medal in 1968, setting a new world record. [1] At the European championships she won a silver medal outdoors in 1969 and two medals indoors, in 1970 and 1971. After retiring from competitions she worked as a coach at her club Steaua Bucureşti. Monica Iagăr was one of her trainees. [2]

Rowing at the 2004 Summer Olympics took place at the Schinias Olympic Rowing and Canoeing Centre and featured 550 competitors taking part in 14 events.

Romania competed at the 2004 Summer Olympics in Athens, Greece, from 13 to 29 August 2004. Romanian athletes have competed at every Summer Olympic Games since its official debut in 1924, missing only two editions, including the 1948 Summer Olympics. The Romanian Olympic and Sports Committee sent the nation's smallest team to the Games since the 1988 Summer Olympics in Seoul. A total of 108 athletes, 50 men and 58 women, had competed in 16 different sports, most notably in artistic gymnastics and rowing. For the third time in Olympic history, Romania was again represented by more female than male athletes.

Viorica Susanu is a Romanian rower and winner of four Olympic Gold medals. 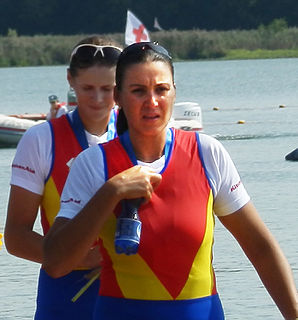 Georgeta Damian is a female rower from Romania and winner of five Olympic gold medals. She married the rower Valeriu Andruanche in 2006.

Daniela Viorica Silivaș-Harper, best known as Daniela Silivaș, is a Romanian former artistic gymnast who is most famous for winning six medals at the 1988 Summer Olympics in Seoul. In her five-year tenure as a member of the Romanian senior national team, Silivaș earned six individual World Championships titles as well as the 1987 European Championships all-around title. She was the only gymnast, male or female, to medal in every single event at the 1988 Olympics, where she earned seven perfect 10 scores. She was known for her technical excellence, difficult routines, charming performances, and artistic flair.

Sheila Sherwood is a former international long jumper whose career highlights included a silver medal at the 1968 Summer Olympics in Mexico, and a gold medal at the 1970 British Commonwealth Games in Edinburgh. She competed in three consecutive Summer Olympic Games and had a career best distance of 6.73 metres.

Viorica Ţigău is a Romanian heptathlete. 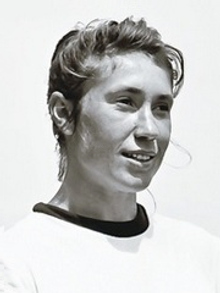 Viorica Dumitru is a retired Romanian sprint canoer. She competed at the 1968 and 1972 Olympics and 1973 and 1974 world championships and won one silver and five bronze medals in various events. She also placed fourth in the K-2 500 m final at the 1968 Olympics, 0.57 seconds behind the second and third places.

Viorica Ioja is a retired Romanian rowing coxswain. Competing in coxed fours she won an Olympic gold medal in 1984 and the world title in 1986, placing second in 1983 and 1985.

Viorica Neculai is a retired Romanian rower. Competing in eights she won a silver medal at the 1992 Olympics and gold medals at the 1989 and 1993 world championships.

Vasilica Viorica Dăncilă is a Romanian politician, former leader of the Social Democratic Party, and was Prime Minister of Romania from 29 January 2018 to 4 November 2019. She was the first woman in Romanian history to hold both the office of Prime Minister and president of the PSD. In 2014, she was elected as a member in the European Parliament for a second term from the PSD. Viorica Dăncilă was also the president of the Social Democratic Women's Organization (OFSD) between 2015 and 2018.

Viorica is a Romanian female given name. Notable people with the name include:

Dorina Catineanu is a Romanian female former track and field athlete who competed in the long jump. Her personal best was 6.50 m, set in Bucharest on 21 July 1974.

Viorica Dima Ghican is a Romanian female former distance runner who competed over distances from 1500 metres to 10,000 metres. She competed in track, road and cross country running disciplines. She was the gold medallist in the 10,000 m at the 1989 Summer Universiade, setting a games record in the process. Among her other individual honours were gold medals at the Balkan Athletics Championships and World University Cross Country Championships in 1988, and silver medals at the 1990 Goodwill Games and 1989 European Cup.