Viral vector vaccines use a modified version of one virus as a vector to deliver to a cell a nucleic acid coding for an antigen for another infectious agent. Viral vector vaccines do not cause infection with either the virus used as the vector, or the source of the antigen. The genetic material it delivers does not integrate into a person's genome. [1]

Viral vector vaccines enable antigen expression within cells and induce a robust cytotoxic T cell response, unlike subunit vaccines which only confer humoral immunity. Most viral vectors are designed to be incapable of replication because the necessary genes are removed. [2]

Adenovirus vectors have the advantage of high transduction efficiency, transgene expression, and broad viral tropism, and can infect both dividing and non-dividing cells. A disadvantage is that many people have pre-existing immunity to adenoviruses due to previous exposure. Human adenovirus serotype 5 is often used because it can be easily produced in high titers. [2]

As of April 2021, four adenovirus vector vaccines for COVID-19 have been authorized in at least one country:

Zabdeno, the first dose of the Zabdeno/Mvabea Ebola vaccine, is derived from human adenovirus serotype 26 expressing the glycoprotein of the Ebola virus Mayinga variant. [12] Both doses are non-replicating vectors and carry the genetic code of several Ebola virus proteins. [13]

The rVSV-ZEBOV vaccine is an Ebola vaccine. It is a recombinant, replication-competent vaccine [14] consisting of vesicular stomatitis virus (VSV) genetically engineered [15] so that the gene for the natural VSV envelope glycoprotein is replaced with that from the Kikwit 1995 Zaire strain Ebola virus. [16] [17] [18]

Mvabea, the second dose of the Zabdeno/Mvabea Ebola vaccine, is a modified vaccinia Ankara vector, a type of poxvirus. [12] Both doses are non-replicating vectors and carry the genetic code of several Ebola virus proteins. [13]

Other viruses that have been investigated as vaccine vectors include adeno-associated virus, retrovirus (including lentivirus), cytomegalovirus, and Sendai virus, [2] as well as influenza virus and measles virus. [1]

Indiana vesiculovirus, formerly Vesicular stomatitis Indiana virus is a virus in the family Rhabdoviridae; the well-known Rabies lyssavirus belongs to the same family. VSIV can infect insects, cattle, horses and pigs. It has particular importance to farmers in certain regions of the world where it infects cattle. This is because its clinical presentation is identical to the very important foot and mouth disease virus.

Adenoviruses are medium-sized, nonenveloped viruses with an icosahedral nucleocapsid containing a double stranded DNA genome. Their name derives from their initial isolation from human adenoids in 1953.

An oncolytic virus is a virus that preferentially infects and kills cancer cells. As the infected cancer cells are destroyed by oncolysis, they release new infectious virus particles or virions to help destroy the remaining tumour. Oncolytic viruses are thought not only to cause direct destruction of the tumour cells, but also to stimulate host anti-tumour immune system responses.

Viral vectors are tools commonly used by molecular biologists to deliver genetic material into cells. This process can be performed inside a living organism or in cell culture. Viruses have evolved specialized molecular mechanisms to efficiently transport their genomes inside the cells they infect. Delivery of genes or other genetic material by a vector is termed transduction and the infected cells are described as transduced. Molecular biologists first harnessed this machinery in the 1970s. Paul Berg used a modified SV40 virus containing DNA from the bacteriophage λ to infect monkey kidney cells maintained in culture. 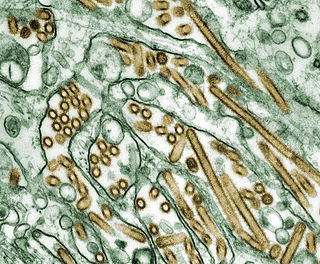 A H5N1 vaccine is an influenza vaccine intended to provide immunization to influenza A virus subtype H5N1.

Recombinant vesicular stomatitis virus–Zaire Ebola virus (rVSV-ZEBOV), also known as Ebola Zaire vaccine live and sold under the brand name Ervebo, is an Ebola vaccine for adults that prevents Ebola caused by the Zaire ebolavirus. When used in ring vaccination, rVSV-EBOV has shown a high level of protection. Around half the people given the vaccine have mild to moderate adverse effects that include headache, fatigue, and muscle pain. 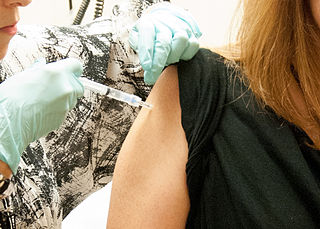 Ebola vaccines are vaccines either approved or in development to prevent Ebola. The first vaccine to be approved in the United States was rVSV-ZEBOV in December 2019. It had been used extensively in the Kivu Ebola epidemic under a compassionate use protocol. During the early 21st century, several vaccine candidates displayed efficacy to protect nonhuman primates against lethal infection.

cAd3-ZEBOV is an experimental vaccine for two ebolaviruses, Ebola virus and Sudan virus, developed by scientists at GlaxoSmithKline (GSK) and tested by National Institute of Allergy and Infectious Disease (NIAID). This vaccine is derived from a chimpanzee adenovirus, Chimp Adenovirus type 3 (ChAd3), genetically engineered to express glycoproteins from the Zaire and Sudan species of ebolavirus to provoke an immune response against them. Simultaneous phase 1 trials of this vaccine commenced in September 2014, being administered to volunteers in Oxford and Bethesda. During October the vaccine is being administered to a further group of volunteers in Mali. If this phase is completed successfully, the vaccine will be fast tracked for use in the Ebola virus epidemic in West Africa. In preparation for this, GSK is preparing a stockpile of 10,000 doses. 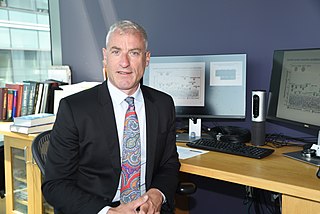 Sean Whelan is a British-American virologist. He is known for identifying the cellular protein used as a receptor by Ebola virus, for defining the entry pathway that rabies virus uses to enter neurons, and for identifying the ribosome as a possible target for antiviral drugs. In July 2019, he was announced as the new Chair of the Department of Molecular Microbiology at Washington University School of Medicine in St Louis, Missouri. In February 2020, Whelan was recognized as the LGBTQ+ Scientist of the Year 2020 by the National Organization of Gay and Lesbian Scientists and Technical Professionals. 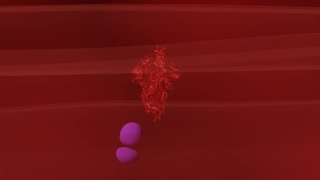 A COVID‑19 vaccine is a vaccine intended to provide acquired immunity against severe acute respiratory syndrome coronavirus 2 (SARS‑CoV‑2), the virus that causes coronavirus disease 2019 (COVID‑19). Prior to the COVID‑19 pandemic, an established body of knowledge existed about the structure and function of coronaviruses causing diseases like severe acute respiratory syndrome (SARS) and Middle East respiratory syndrome (MERS). This knowledge accelerated the development of various vaccine platforms during early 2020. The initial focus of SARS-CoV-2 vaccines was on preventing symptomatic, often severe illness. On 10 January 2020, the SARS-CoV-2 genetic sequence data was shared through GISAID, and by 19 March, the global pharmaceutical industry announced a major commitment to address COVID-19. The COVID‑19 vaccines are widely credited for their role in reducing the spread, severity, and death caused by COVID-19.

Marylyn Martina Addo is a German virologist who is a Professor and the German Center for Infection Research (DZIF) Head of Infectious Disease at the University Medical Center Hamburg-Eppendorf. Addo has developed and tested vaccinations that protect people from Ebola virus disease and the MERS coronavirus EMC/2012. She is currently developing a viral vector based COVID-19 vaccine.

GamEvac-Combi is a heterologous VSV- and Ad5-vectored Ebola vaccine. There is also a version called GamEvac which is a homologous Ad5-vectored vaccine. GamEvac-Combi was developed by Gamaleya Research Institute of Epidemiology and Microbiology. As of 2015 the vaccine has been licensed in Russia for emergency use, on the basis of Phase 1 and Phase 2 clinical trials.

ChAdOx1 is an adenoviral vector for vaccines that was developed by the Jenner Institute, University of Oxford. The vector is a chimpanzee adenovirus modified to avoid its replication. 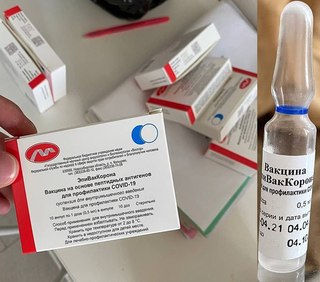 GRAd-COV2 is a COVID-19 vaccine candidate developed by ReiThera Srl and Lazzaro Spallanzani National Institute for Infectious Diseases. It is based on a novel replication defective Gorilla Adenovirus and encodes for SARS-COV-2 full length prefusion stabilized Spike protein. More specifically, the vector used is the simian group C adenovirus GRAd32, isolated from a captive gorilla, with a genome deleted of the entire E1 and E3 regions and the native E4 region replaced with the E4 orf6 of human adenovirus 5 (hAd5).

A genetic vaccine is a vaccine that contains nucleic acids such as DNA or RNA that lead to protein biosynthesis of antigens within a cell. Genetic vaccines thus include DNA vaccines, RNA vaccines and viral vector vaccines.

COVID-19 vaccine clinical research uses clinical research to establish the characteristics of COVID-19 vaccines. These characteristics include efficacy, effectiveness and safety. 24 vaccines are authorized for use by national governments, including six approved for emergency or full use by at least one WHO-recognised stringent regulatory authority; while five are in Phase IV. 204 vaccines are undergoing clinical trials that have yet to be authorized. Nine clinical trials consider heterologous vaccination courses.