The title Virgin (Latin Virgo, Greek Παρθένος) is an honorific bestowed on female saints and blesseds in some Christian traditions, including the Eastern Orthodox Church and the Catholic Church.

Chastity is one of the seven virtues in Christian tradition, listed by Pope Gregory I at the end of the 6th century. In 1 Corinthians, Saint Paul suggests a special role for virgins or unmarried women (ἡ γυνὴ καὶ ἡ παρθένος ἡ ἄγαμος) as more suitable for "the things of the Lord" (μεριμνᾷ τὰ τοῦ κυρίου). [1] In 2 Corinthians 11:2, Paul alludes to the metaphor of the Church as Bride of Christ by addressing the congregation "I have espoused you to one husband, that I may present you as a chaste virgin to Christ".

In the theology of the Church Fathers, the prototype of the sacred virgin is Mary, the mother of Jesus, consecrated by the Holy Spirit at the Annunciation. [2] Although not stated in the gospels, the perpetual virginity of Mary was widely upheld as a dogma by the Church Fathers from the 4th century.

In the hagiography of Christian martyrs of the late 1st to early 4th centuries, virgin martyrs (Latin virgo et martyr (Greek παρθένος-μάρτυρας, Russian дева-мученица) were often persecuted for their refusal to enter a worldly marriage after having vowed to keep their virginity for the sake of heaven. Other virgin martyrs lost their lives in defensum castitatis ("in defense of chastity"). [3] A group of virgin martyrs of the early church, namely Saints Catherine of Alexandria, Margaret of Antioch, Barbara of Nicomedia and Dorothea of Caesarea, is called "the four capital virgins", three of them belong to the Fourteen Holy Helpers.

The tradition of the rite of the Consecratio virginum (consecration of a virgin) dates back to the 4th century, the form of life to apostolic times. The first known formal consecration is that of Saint Marcellina, dated AD 353, mentioned in De Virginibus by her brother, Saint Ambrose. Another early consecrated virgin is Saint Genevieve (c. 422 – c. 512).

According to Raymond of Capua, Saint Catherine of Siena (c. 1347–1380) at the age of twenty-one (c. 1368) experienced what she described in her letters as a Mystical marriage with Jesus Christ, later a popular subject in art as the Mystic marriage of Saint Catherine .

Canon 922 of the Catechism of the Catholic Church states that "From apostolic times Christian virgins, called by the Lord to cling only to him with greater freedom of heart, body, and spirit, have decided with the Church's approval to live in a state of virginity 'for the sake of the Kingdom of heaven'."

Virgins are consecrated for the church as a bride of Christ both in the Orthodox churches and the Roman Catholic church. While in the latter one the consecration has been bestowed for centuries only for nuns living in cloistered monasteries, the bestowal for women living in the world has been reintroduced under Pope Paul VI in 1970. [5] The number of consecrated virgins ranges in the thousands. Estimates derived from the diocesan records range at around 5,000 consecrated virgins worldwide as of 2018. [6] 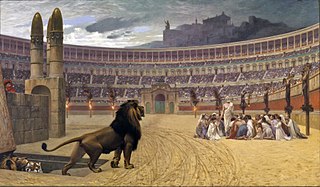 Year 303 (CCCIII) was a common year starting on Friday of the Julian calendar. It was known in the Roman Empire as the Year of the Consulship of Diocletian and Maximian. The denomination 303 for this year has been used since the early medieval period, when the Anno Domini calendar era became the prevalent method in Europe for naming years. 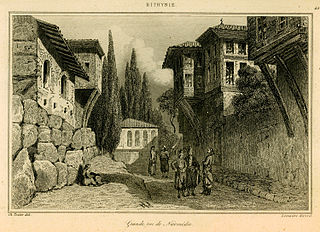 Nicomedia was an ancient Greek city located in what is now Turkey. In 286, Nicomedia became the eastern and most senior capital city of the Roman Empire, a status which the city maintained during the Tetrarchy system (293–324). 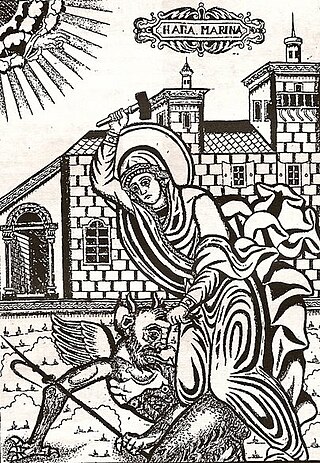 Margaret, known as Margaret of Antioch in the West, and as Saint Marina the Great Martyr in the East, is celebrated as a saint on 20 July in the Western Rite Orthodoxy, Roman Catholic Church and Anglicanism, on 17 July by the Eastern Orthodox Church and on Epip 23 and Hathor 23 in the Coptic Orthodox Church of Alexandria. 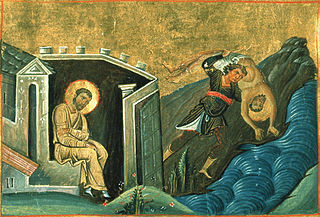 Lucian of Antioch, known as Lucian the Martyr, was a Christian presbyter, theologian and martyr. He was noted for both his scholarship and ascetic piety. 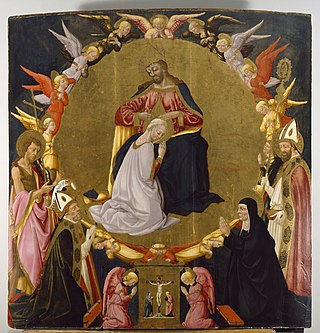 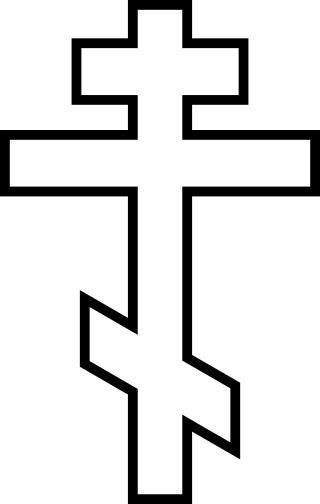 Saints Cyprian and Justina are honored in the Catholic Church, Eastern Orthodox Church and Oriental Orthodoxy as Christians of Antioch, who in 304, during the Diocletianic Persecution, suffered martyrdom at Nicomedia on September 26. According to Roman Catholic sources, no Bishop of Antioch bore the name of Cyprian. 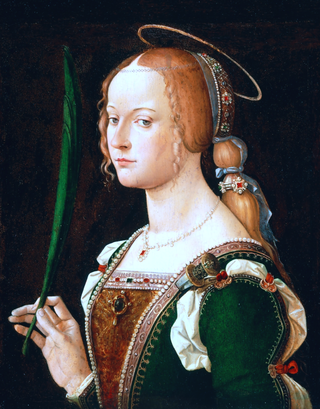 Justina of Padua is a Christian saint and a patroness of Padua. Her feast day is October 7. She is often confused with Justina of Antioch. She was devoted to religion from her earliest years and took the vow of perpetual virginity. When she was brought before Maximian the prefect, she remained firm against all attacks. The prefect caused her to be slain with the sword.

This page is an index of lists of people considered martyrs. A martyr is someone who suffers persecution and death for advocating, renouncing, refusing to renounce, or refusing to advocate a belief or cause as demanded by an external party. This refusal to comply with the presented demands results in the punishment or execution of the martyr by the oppressor.

Early Christianity spread from the Levant, across the Roman Empire, and beyond. Originally, this progression was closely connected to already established Jewish centers in the Holy Land and the Jewish diaspora. The first followers of Christianity were Jews or proselytes, commonly referred to as Jewish Christians and God-fearers.

Agatha Lin, born in Qinglong in the Guizhou of southeast China in 1817, was a Chinese saint and martyr. She was a headmistress and catechist, and one of the first to evangelize the Miao people. She was beheaded for her faith on January 28, 1858. Agatha was beatified by Pope Pius X on May 2, 1909, and canonized in 2000. Her feast day is February 18.

This article lists historical events that occurred between 301–400 in modern-day Lebanon or regarding its people.