Gold is a chemical element with the symbol Au and atomic number 79, making it one of the higher atomic number elements that occur naturally. In its purest form, it is a bright, slightly reddish yellow, dense, soft, malleable, and ductile metal. Chemically, gold is a transition metal and a group 11 element. It is one of the least reactive chemical elements and is solid under standard conditions. Gold often occurs in free elemental (native) form, as nuggets or grains, in rocks, in veins, and in alluvial deposits. It occurs in a solid solution series with the native element silver and also naturally alloyed with copper and palladium. Less commonly, it occurs in minerals as gold compounds, often with tellurium. 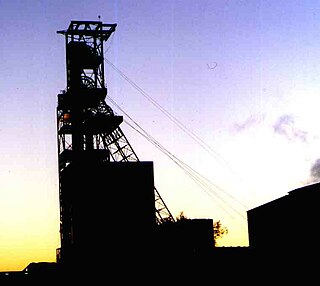 In 1890, two railway surveyors from the state of Virginia in the United States etched the name of their birthplace on a boulder near the farm Merriespruit. When a railway siding was eventually established at this spot, the name was adopted, and it stuck after the discovery of gold in 1949 which resulted in a mushrooming settlement on the banks of the Sand River. In 1988 the Sand River burst its banks and flooded parts of the town. In 1994 the Merriespruit tailings dam disaster occurred just outside Virginia, killing seventeen people. [2]

The following lists events that happened during 1890 in South Africa. 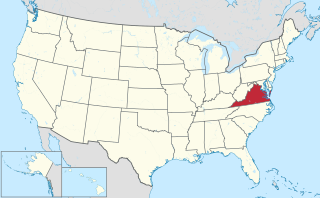 On the 5 December 2000, Virginia was incorporated into the Matjhabeng Local Municipality along with the city of Welkom and the towns of Allanridge, Hennenman, Odendaalsrus and Ventersburg. During the apartheid era, black people Lived outside Virginia in the location of Meloding. The town itself boomed during the gold mining years' golden age and gold mining is still responsible for most of the towns' economy. 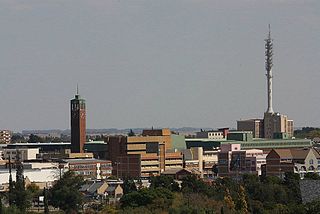 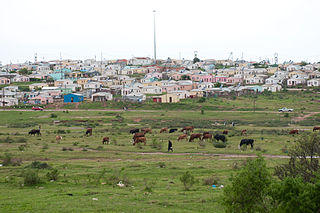 Virginia is surrounded by some of the largest gold fields in Free State, and its economy is dominated by mining, gold-extraction plants, and the manufacture of sulfuric acid from gold ore. It is also known for having the deepest pipe-mine into the earth on the planet. [3] Commercial farms in the surrounding area primarily grow maize (corn) and raise livestock. Virginia is located on the main rail line between Bloemfontein and Johannesburg. 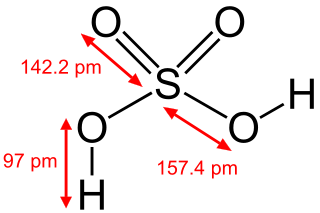 Sulfuric acid (alternative spelling sulphuric acid), also known as vitriol, is a mineral acid composed of the elements sulfur, oxygen and hydrogen, with molecular formula H2SO4. It is a colorless, odorless, and syrupy liquid that is soluble in water and is synthesized in reactions that are highly exothermic. 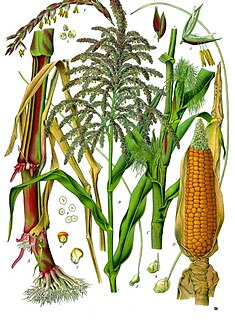 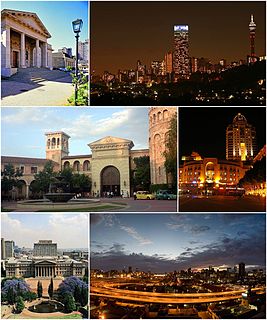 Johannesburg, informally known as Jozi or Jo'burg, is the largest city in South Africa and one of the 50 largest urban areas in the world. It is the provincial capital and largest city of Gauteng, which is the wealthiest province in South Africa. While Johannesburg is not one of South Africa's three capital cities, it is the seat of the Constitutional Court. The city is located in the mineral-rich Witwatersrand range of hills and is the centre of large-scale gold and diamond trade.

Lillooet, formerly Cayoosh Flat, is a community on the Fraser River in British Columbia, Canada, about 240 kilometres (150 mi) up the British Columbia Railway line from Vancouver. Situated at an intersection of deep gorges in the lee of the Coast Mountains, it has a dry climate with an average of 329.5 millimetres (13 in) of precipitation being recorded annually. Lillooet has a long growing season, and once had prolific market gardens and orchard produce. It often vies with Lytton and Osoyoos for the title of "Canada's Hot Spot" on a daily basis in summer.

Hudson's Hope is a district municipality in northeastern British Columbia, Canada, in the Peace River Regional District. It covers an area of 927 square kilometres (358 sq mi) with a population of 1,157 people. Having been first settled along the Peace River in 1805, it is the third-oldest European-Canadian community in the province, although it was not incorporated until 1965. Most jobs in the economy are associated with the nearby W. A. C. Bennett Dam and Peace Canyon Dam, and timber logging. 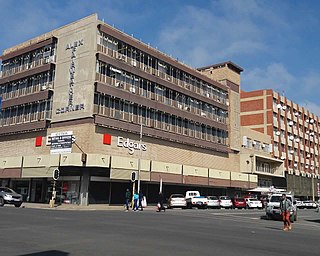 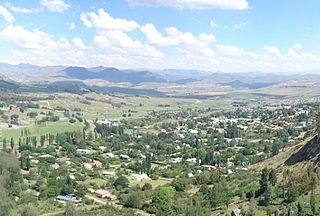 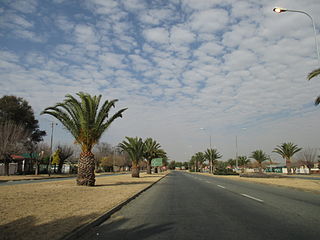 Theunissen is a small town that has the only wine estate, the Theunissen Wine Farm, in the Free State province of South Africa. It is located about 95 kilometers northeast of Bloemfontein and about 45 kilometers south of Welkom. It was founded by Boer War Commandant Helgaardt Theunissen. Theunissen has a small community which supports the local businesses.

Frankfort is a small farming town situated on the banks of the Wilge River in the Free State province of South Africa. The town was laid out in 1869 on the farm Roodepoort, and named Frankfurt by Albert van Gordon. The town later received municipality status in 1896.

Heilbron is a small farming town in the Free State province of South Africa which services the cattle, dairy, sorghum, sunflower and maize industries. Raw stock beneficiation occurs in leisure foods, dairy products and stock feeds. It also serves as a dormitory town for the Gauteng metropolis.

Botshabelo, meaning "a place of refuge", is a large township set up in 1979 by the then apartheid government 45 km east of Bloemfontein in the present-day Free State province of South Africa. Botshabelo nower days is the largest township in free state ,second largest township in south africa after soweto 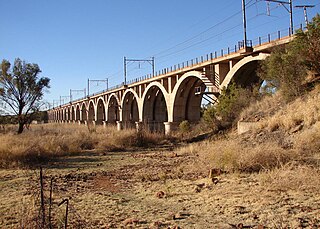 Warrenton is an agricultural town of approximately 18,000 people in the Northern Cape province of South Africa, situated 70 kilometres (40 mi) north of Kimberley on the Vaal River. 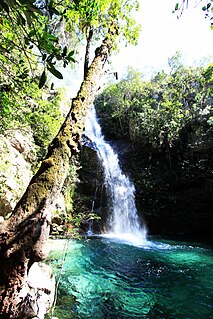 Cavalcante is a town located in the northern state of Goiás, Brazil. It used to be a big gold producer during the colonial times, but today Cavalcante is more known by its natural beauties, rivers and waterfalls. It is home to a big number of Quilombos, communities of descendants of African-Brazilians who managed to escape from slavery.

The name El Oro de Hidalgo, is not from Nahuatl, like most other municipality names in the state, but from Spanish, and simply means "the gold." It has subsequently been given an alternative Nahuatl name of "Teocuitlatl," meaning "sacred excrement," referring to gold. Its seal, in the form of an Aztec glyph, contains elements referring to gold and to caves, of which there are many in the municipality. The municipality is located in the northwest of the State of Mexico, 96 km from the state capital of Toluca, and is bounded by the municipalities of Temascalcingo to the north, Jocotitlán to the east, San Felipe del Progreso and San José del Rincón to the south, and by the state of Michoacán to the west. As of 2005, the municipal seat with the formal name of El Oro de Hidalgo had a population of 5,797, and the municipality of El Oro had a population of 31,847. While it made its name as a major gold and silver mining town from the 17th to the early 20th centuries, the mines have since been tapped out and the town is turning to tourism for economic development.