Last updated July 19, 2022
Title in the Peerage of the United Kingdom

This branch of the Shelley family descends from John Shelley-Sidney, the only son of the second marriage of Sir Bysshe Shelley, 1st Baronet, of Castle Goring (see Shelley Baronets for earlier history of the family) by Elizabeth Jane, daughter of William Perry and Elizabeth, daughter and heir of the Hon. Thomas Sidney, fourth son of Robert Sidney, 4th Earl of Leicester (a title which had become extinct in 1743; see the Earl of Leicester 1618 creation). In 1799 he assumed by Royal licence the additional surname of Sidney on succeeding to the estates, including Penshurst Place in Kent, of his maternal grandmother. In 1818 he was created a Baronet, of Penshurst in the County of Kent, in the Baronetage of the United Kingdom.

His son and heir apparent, Philip Sidney, represented Eye in the House of Commons. In 1835, fourteen years before succeeding his father in the baronetcy, he was raised to the Peerage of the United Kingdom as Baron De L'Isle and Dudley, of Penshurst in the County of Kent. [2] The title derived from the fact that the title of "Viscount De L'Isle" had been held by his ancestors the Earls of Leicester (in turn deriving from their ancestors), but had become extinct along with the earldom in 1743. The title of "Dudley" came from the fact that Robert Sidney, 1st Earl of Leicester (of the 1618 creation) was the nephew of Robert Dudley, 1st Earl of Leicester (of the 1564 creation), the fifth son of John Dudley, 1st Duke of Northumberland, who was as well Viscount Lisle by right of his mother. Lord De L'Isle and Dudley discontinued the use of the surname Shelley.

His grandson, the fifth Baron (who only held the titles for two months in 1945 after succeeding his elder brother), notably served as Mayor of Chelsea and was a member of the London County Council. His son, the sixth Baron, was a prominent Conservative politician and served as Secretary of State for Air from 1951 to 1955. In 1956 he was created Viscount De L'Isle, of Penshurst in the County of Kent, in the Peerage of the United Kingdom. [3] Lord De L'Isle later served as Governor-General of Australia. In 1965 he also succeeded his kinsman as ninth Baronet of Castle Goring. As of 2017 [update] the titles are held by his son, the second Viscount, who succeeded in 1991.

The family seat is Penshurst Place, near Tonbridge, Kent. Close to it is the parish church of St John the Baptist where the Sidney Chapel houses many memorials to the family.

The heir apparent is the present holder's only son the Hon. Philip William Edmund Sidney (b. 1985).

Earl of Guilford is a title that has been created three times in history. The title was created for the first time in the Peerage of England in 1660 for Elizabeth Boyle. She was a daughter of William Feilding, 1st Earl of Denbigh, and the widow of Lewis Boyle, 1st Viscount Boyle of Kinalmeaky. The title was for life only and became extinct on her death in 1667. The title was created for a second time in the Peerage of England in 1674 for John Maitland, 1st Duke of Lauderdale. For more information on this creation, see the article on him as well as the Earl of Lauderdale. 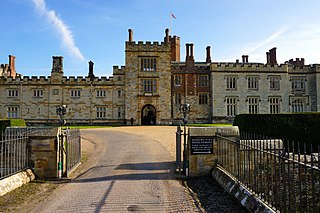 Penshurst is a historic village and civil parish located in a valley upon the northern slopes of the Kentish Weald, at the confluence of the River Medway and the River Eden, within the Sevenoaks district of Kent, England.

Sidney or Sydney is an English surname. It is probably derived from an Anglo-Saxon locational name, [æt þǣre] sīdan īege, "[at the] wide island/watermeadow" . There is also a folk etymological derivation from the French place name Saint Denis.

There have been three baronetcies created for members of the Shelley family, one in the Baronetage of England and two in the Baronetage of the United Kingdom. The three recipients of the titles represented two different branches of the family with a common ancestor in John Shelley of Michelgrove. The most famous member of the family is the poet Percy Bysshe Shelley, although he never held any title. The holders of the third and last creation were later elevated to the peerage as Baron De L'Isle and Dudley and Viscount De L'Isle.

Sophia Sidney, Baroness De L'Isle and Dudley was the eldest illegitimate daughter of William IV of the United Kingdom and his longtime mistress Dorothea Jordan. She was married to Philip Sidney, 1st Baron De L'Isle and Dudley, and had four surviving children. Shortly before her death in 1837, she served as State Housekeeper in Kensington Palace.