Vissel Kobe (ヴィッセル神戸, Visseru Kōbe) is a Japanese professional football club based in Kobe, Hyōgo Prefecture. The club plays in the J1 League, which is the top tier of football in the country. The team's home stadium is Kobe Wing Stadium, in Hyōgo-ku, though some home matches are played at Kobe Universiade Memorial Stadium in Suma-ku.

The club was founded in 1966 as the semi-professional Kawasaki Steel Soccer Club in Kurashiki, Okayama Prefecture. [2] It was first promoted to the Japan Soccer League Division 2 in 1986, and stayed there until the JSL folded in 1992. [2]

In 1995, the city of Kobe reached an agreement with Kawasaki Steel, the parent company, to move the club to Kobe and compete for a spot in the professional J.League as Vissel Kobe. Vissel is a combination of the words "victory" and "vessel", in recognition of Kobe's history as a port city. [2] (Owing to its importance to the city of Kobe, Kawasaki Heavy Industries, parent company of former team patron Kawasaki Steel, remains a Vissel Kobe sponsor. Kawasaki Steel was eventually sold off to become part of JFE Holdings.)

Vissel Kobe began play in 1995 in the Japan Football League, a league below J.League, and the supermarket chain Daiei was slated as the club's primary investor. However, the economic downturn following the Great Hanshin earthquake forced Daiei to pull out and the city of Kobe became responsible for operating the club.

Despite finishing 2nd in the JFL in 1996, Vissel was promoted to the J.League (the champions, Honda FC, refused to abandon their corporate ownership and become a professional club) and began play in the top division of Japanese football in 1997. However, due to mismanagement, including the inability to secure investors and sponsors, Vissel has never been a contender for the league title. In December, 2003, mounting financial losses forced the club to file for bankruptcy protection.

In January 2004, Vissel was sold to Crimson Group, parent company of online merchant Rakuten, whose president is Kobe native Hiroshi Mikitani. Vissel's first signing under the Mikitani regime, İlhan Mansız, who was acquired partly to capitalize on his popularity during the 2002 FIFA World Cup hosted in Korea and Japan, was a massive failure – the Turkish forward played just three matches before leaving the team because of a knee injury. Mikitani also alienated supporters by changing the team uniform colours from black and white stripes to crimson, after his Crimson Group and the colour of his alma mater, Harvard Business School. The Tohoku Rakuten Golden Eagles, a baseball team also owned by Rakuten but based in Sendai, wear the same colours.

Vissel finished 11th in the league in 2004, the same position as the previous year, and finished 18th and last place in 2005, resulting in automatic relegation from J.League Division 1, or J1, to J2. During the two-year span, Vissel had five different head coaches. 2006 was Vissel's first season in J2 after nine years in the top division of soccer in Japan. They finished 3rd in the 2006 season and were promoted to J1 after beating Avispa Fukuoka in the promotion/relegation play-offs.

During the period of 2007 to 2011 Vissel finished in the bottom half of the table each year. In 2012 they finished 16th, third from last, and were again relegated to J2. In 2013, Vissel finished in second place, 4 points behind Gamba Osaka, which secured their return to J1 for the 2014 season.

On 6 December 2014, Rakuten Inc. bought the team from the Crimson Group. [3] In May 2018, Vissel signed 2010 FIFA World Cup winner Andrés Iniesta from FC Barcelona. [4] In December 2018 Vissel Kobe managed to sign David Villa from New York City FC the Spanish striker scored 13 goals in 28 games. Alongside Sergi Samper and Andrés Iniesta Villa was the third Spaniard in the team in that season in which the Emperor's Cup was won.

On 1 January 2020, first time finalist Vissel beat Kashima Antlers in the 2019 Emperor's Cup final at the recently opened New National Stadium to win the first title in the club history. The furthest Kobe had been in the Cup was the semifinals of 2000 and 2017. [5] This was Spanish striker David Villa's last professional match. [6] Vissel also qualified for the 2020 AFC Champions League for the first time. On 8 February 2020, Vissel beat Yokohama F. Marinos to win their first Japanese Super Cup title and respectively their second national title ever. [7] 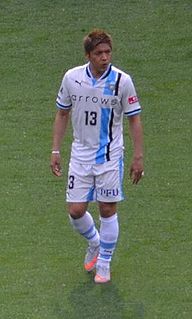 Yoshito Okubo is a Japanese professional footballer who plays for Cerezo Osaka. He played for the Japan national team scoring 6 goals in 60 appearances

Hiroshi Mikitani is a Japanese billionaire businessman and writer. He is the founder, chairman and CEO of Rakuten, Inc. He is also the president of Crimson Group, chairman of the football club Vissel Kobe, chairman of Tokyo Philharmonic Orchestra, and a board member of Lyft.

Hotaru Yamaguchi is a Japanese footballer who plays as a midfielder for Vissel Kobe. He is also a member of the Japanese national team.

Kyogo Furuhashi is a Japanese football player. He plays for Vissel Kobe in the J1 League and the Japan national football team as a forward or winger.

The 2020 Vissel Kobe season was Vissel Kobe's seventh consecutive season in the J1 League following promotion to the top flight in 2013 and their 22nd J1 League season overall. The club also took part in the J. League Cup, the 2020 Japanese Super Cup, and the 2020 AFC Champions League. The club secured their first ever appearances in the latter two competition as winners of the 2019 Emperor's Cup.

The 2019 Vissel Kobe season was Vissel Kobe's sixth consecutive season in the J1 League following promotion to the top flight in 2013 and their 21st J1 League season overall. The club also participated in the 2019 Emperor's Cup, the 2019 J.League Cup. Vissel Kobe defeated Kashima Antlers in the final of the Emperor's Cup on 1 January 2020, winning a major trophy for the first time in the club's history.