Vladimír Kukoľ (born 8 May 1986) is a Slovak football midfielder who currently plays for Poprad in the 2. liga.

In June 2011, he joined Jagiellonia Białystok on a one-year contract. [1] 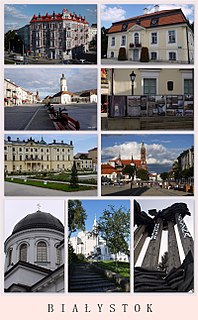 Choroszcz is a town in north-eastern Poland.

.pl is the Internet country code top-level domain (ccTLD) for Poland, administered by NASK, the Polish research and development organization. It is one of the founding members of CENTR.

Szymon Datner was a Polish historian, best known for his studies of Nazi war crimes against the Jewish population of the Białystok area after the German attack, across Poland, upon the Soviet Union in June 1941.

Vuk Sotirović is a Serbian football striker who plays for Zemun in the Serbian First League.

The Białystok City Stadium is located in Białystok, Poland. It is used by Jagiellonia. 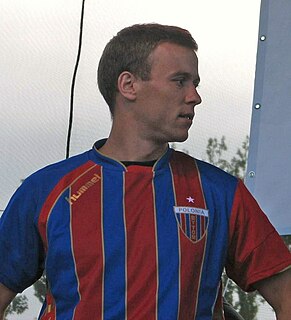 Grzegorz Sandomierski is a Polish football goalkeeper who plays for Jagiellonia Białystok. He has also made three appearances for Poland.

Rafał Gikiewicz is a Polish footballer who plays as a goalkeeper for 1. FC Union Berlin. 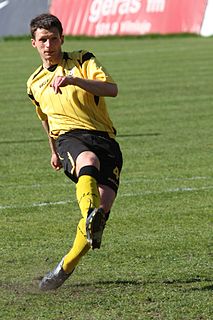 Tadas Kijanskas is a Lithuanian international footballer who currently plays as a defender for Hapoel Umm al-Fahm in the Israel National League, the second Israeli league.

Bartłomiej Radosław Pawłowski is a Polish footballer who plays as a forward or left winger for Turkish club Gazişehir Gaziantep.

Andrzej Niewulis is a Polish footballer of Lithuanian descent who plays for Raków Częstochowa.

Białystok is one of the largest cultural centers in the Podlaskie Voivodeship. The attractions include performing arts groups, art museums, historical museums, walking tours of architectural / cultural aspects and a wide variety of parks and green spaces. Białystok in 2010 was on the short-list, but ultimately lost the competition, to become a finalist for European Capital of Culture in 2016.

Białystok, like other major cities in Poland, is a city county. The Legislative power in the city is vested in the unicameral Białystok City Council, which has 28 members. Council members are elected directly every four years, one of whom is the mayor, or President of Białystok. Like most legislative bodies, the City Council divides itself into committees which have the oversight of various functions of the city government. Bills passed by a simple majority are sent to the mayor, who may sign them into law. If the mayor vetoes a bill, the Council has 30 days to override the veto by a two-thirds majority vote. The current President of Białystok, elected for his first term in 2006, is Tadeusz Truskolaski.

The Lowlanders Białystok is an American football team based in Białystok, Poland. They play in the Liga Futbolu Amerykańskiego.