Vladimir Ivanovich Yakunin (Russian : Владимир Иванович Якунин; born June 30, 1948 in Melenki, Vladimir Oblast) is a Russian public figure, businessman and former president of Russian Railways (June 2005 – August 2015). In 2012, he was elected chairman of the Union of Railways (UIC) a position he held until 2015. In March 2014, he was placed on the US State Department's list of Russian officials and businessmen sanctioned in the wake the annexation of Crimea. [1] After stepping down as head of Russian Railways, he has continued to be engaged in public work as a founder and president of World Public Forum “Dialogue of Civilizations”. In October 2015, he started work on creating an international think tank focused on the search for solutions to help de-escalate tensions across the world. DOC Research Institute was launched in July 2016 in Berlin.

Vladimir Oblast is a federal subject of Russia. Its administrative center is the city of Vladimir, which is located 190 kilometers (120 mi) east of Moscow. As of the 2010 Census, the oblast's population was 1,443,693.

In 1972, Yakunin graduated from the Leningrad Mechanical Institute where he studied aircraft construction, and specialized in engineering and the maintenance of long-range ballistic missiles. [3]

Yakunin's career began in the State Institute for Applied Chemistry in Leningrad, where he worked from 1972 to 1975. In 1975, he joined the Soviet Army. [4]

Between 1985 and 1991, Yakunin was part of the Soviet diplomatic mission to the United Nations, becoming the Mission's First Secretary in 1988. [5]

In the early 1990s, Yakunin owned a dacha in Solovyovka, Priozersky district of Leningrad region, on the eastern shore of the Komsomol'skoye lake on the Karelian Isthmus near St. Petersburg. His neighbours there included Vladimir Putin, Andrei Fursenko, Sergey Fursenko, Yuriy Kovalchuk, Viktor Myachin, Vladimir Smirnov and Nikolay Shamalov. On November 10, 1996, together they set up the co-operative society Ozero covering their properties. [6] [7] [8] 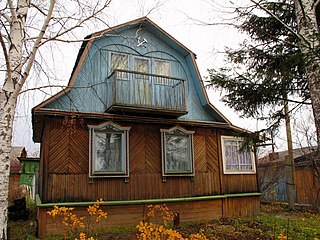 A dacha is a seasonal or year-round second home, often located in the exurbs of Russian-speaking and other post-Soviet countries. A cottage or shack serving as a family's main or only home, or an outbuilding, is not considered a dacha, although some dachas recently have been converted to year-round residences and vice versa. In some cases, owners occupy their dachas for part of the year and rent them to urban residents as summer retreats. People living in dachas are colloquially called dachniki (дачники); the term usually refers not only to dacha dwellers but to a distinctive lifestyle. The Russian term is often said to have no exact counterpart in English. 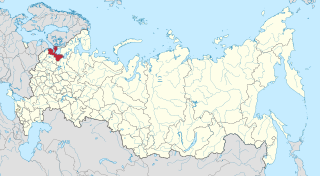 Leningrad Oblast is a federal subject of Russia. It was established on August 1, 1927, although it was not until 1946 that the oblast's borders had been mostly settled in their present position. The oblast was named after the city of Leningrad. Unlike the city, the oblast retains the name of Leningrad. 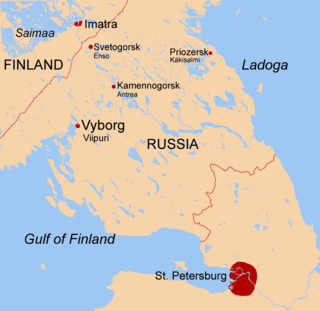 The Karelian Isthmus is the approximately 45–110 km(30–70 mi) wide stretch of land, situated between the Gulf of Finland and Lake Ladoga in northwestern Russia, to the north of the River Neva. Its northwestern boundary is the relatively narrow area between the Bay of Vyborg and Lake Ladoga. If the Karelian Isthmus is defined as the entire territory of present-day Saint Petersburg and Leningrad Oblast to the north of the Neva, the isthmus' area covers about 15,000 km2(6,000 sq mi).

On December 12, 2012 in Paris, the International Union of Railways General Assembly appointed Yakunin Chairman of the Union. He was unanimously reappointed on December 3, 2014 and continued to serve as head until his retirement. [9]

On March 20, 2014, the United States government issued sanctions in response to what it saw as the Russian government’s role in ongoing unrest in Ukraine. The Specially Designated Nationals List (SDN) imposes a travel ban to the United States, the freezing of all Yakunin’s U.S. assets, and a ban on business transactions between American citizens and corporations and Yakunin and any businesses he owns. [13] [14] [15] [16] [17] [18] The Australian Government announced on 19 March 2014 that it would impose a sanctions regime in response to the Russian threat to the sovereignty and territorial integrity of Ukraine. Vladimir Yakunin was placed on Australia’s DFAT consolidated list on 19 June 2014, described as a ‘close personal and financial associate of Vladimir Putin’.

In August 2015, media reports said Yakunin has retired as head of Russian Railways, but in October, further reports suggested he had been dismissed. Russian and British media have alleged that Yakunin’s dismissal was a direct result of his son Andrey Yakunin’s decision to apply for UK citizenship. [19]

Vladimir Vladimirovich Putin is the President of Russia since 2012, previously holding the position from 2000 until 2008. In between his presidential terms, he was also the Prime Minister of Russia under president Dmitry Medvedev. 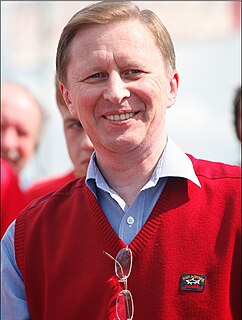 Sergei Borisovich Ivanov is a Russian senior official and politician who is the Special Representative of the President of the Russian Federation on the Issues of Environmental Activities, Environment and Transport since 12 August 2016.

Nikolai Platonovich Patrushev is a Russian politician and security and intelligence officer. He served as Director of the Russian Federal Security Service (FSB), which is the main successor organization to the Soviet KGB, from 1999 to 2008, and he has been Secretary of the Security Council of Russia since 2008. 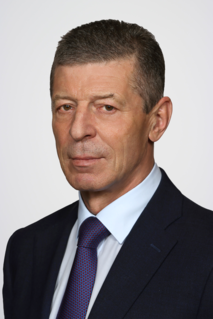 The Russian polician Dmitry Nikolayevich Kozak has served as the Deputy Prime Minister of Russia since 2008.

Sergey Mikhailovich Mironov is a Russian politician. He was Chairman of the Federation Council, the upper house of the Russian parliament, from 2001 to 2011. He leads the faction A Just Russia in the Parliament of Russia. 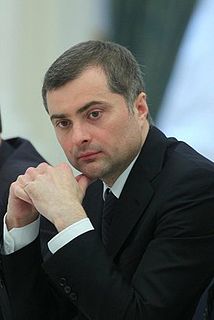 Vladislav Yuryevich Surkov is a Russian businessman and politician of Chechen descent. He was First Deputy Chief of the Russian Presidential Administration from 1999 to 2011, during which time he was widely seen as the main ideologist of the Kremlin who proposed and implemented the concept of sovereign democracy in Russia. From December 2011 until May 2013, Surkov served as the Russian Federation's Deputy Prime Minister. After his resignation, Surkov returned to the Presidential Executive Office and became a personal adviser of Vladimir Putin on relationships with Abkhazia, South Ossetia and Ukraine. 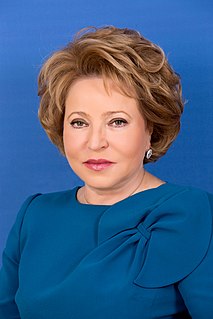 Valentina Ivanovna Matviyenko is a Russian politician serving as the Senator from Saint Petersburg and Chairwoman of the Federation Council since 2011. Previously she was Governor of Saint Petersburg from 2003 to 2011. 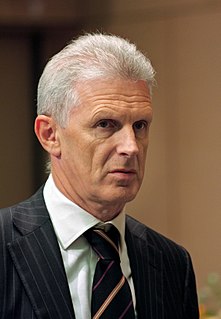 Andrei Aleksandrovich Fursenko is a Russian politician, scientist and businessman. He was the Minister of Education and Science of the Russian Federation from 2004 to 2012.

The Rossiya Bank is a Russian joint stock bank founded on June 27, 1990. The company's headquarters are in Saint Petersburg.

Yury Valentinovich Kovalchuk is a Russian billionaire businessman and financier who is "reputed to be Vladimir Putin's personal banker". The May 2008 issue of Russian Forbes listed him for the first time in its Golden Hundred of Russia's richest, calling him and another new entrant to the List, Gennady Timchenko, "good acquaintances of Vladimir Putin." The magazine placed him at number 53 on the Russians-only list, with an estimated fortune of $1.9 billion. After sanctions imposed on Kovalchuk in 2018, this dropped to $650 million.

Viktor Petrovich Ivanov is a Russian politician and businessman, former KGB officer, who served in the KGB Directorate of Leningrad and its successors in 1977–1994. He was the director of The Federal Narcotics Service of Russia from 2008 until 2016.

Vladimir Alexeyevich Smirnov is a prominent Russian businessman, former Director General of the Petersburg Fuel Company (1997–1998), former Chairman of the Board of Directors of the Petersburg Fuel Company (1999–2001). In 2002–2007 he was the Director General of Tekhsnabexport (TENEX) which carries out export of goods and services produced by Russian nuclear enterprises.

Sergey Yevgenyevich Naryshkin is a Russian official, politician and businessman, Director of the Foreign Intelligence Service since 2016. Previously he was Chairman of the State Duma and Kremlin Chief of Staff (2008-2012); he was also chairman of the Historical Truth Commission in May 2009 until it was dissolved in February 2012.

Vyacheslav Viktorovich Volodin is a Russian politician who has served as the 10th Chairman of the State Duma since 5 October 2016.

Andrey Yakunin is a London-based businessman, chairman of the National Alternative Investment Management Association (NAIMA) in Russia, and the co-founder of VIY Management. Andrey Yakunin has British citizenship and citizenship of the Russian Federation.

Vadim Nikolayevich Morozov, is a Russian politician, magazine writer, and businessman. He is a senior advisor to the President of JSC "Russian Railways", a member of the board of the company. He was formerly the first vice-president of Russian Railways from 2005 to 2015, who was responsible for the operational management of the company. He was the last railway minister in 2004, and in specialty, he was a railway engineer on the operation of the railways. 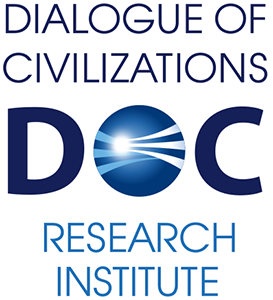 The Dialogue of Civilizations Research Institute is an independent think tank. The Institute's headquarters are located in Berlin, and in Moscow and Vienna there operate its representative offices. It is also planned to open an office in India in 2018. The Institute was founded in mid-2016, its founders are: Walter Schwimmer, Former Secretary General of the Council of Europe (1999-2004), Deputy Chairman of the DOC Research Institute Supervisory Board, Peter W. Schulze - Professor, Political Science Department, Georg-August University of Gőttingen and Vladimir Yakunin, Chairman of the DOC Research Institute Supervisory Board, Head of the State Governance Department Faculty of Political Sciences, Moscow State University, Doctor of Political Science.