A voiturette is a miniature automobile.

Voiturette was first registered by Léon Bollée in 1895 to name his new motor tricycle. The term became so popular in the early years of the motor industry that it was used by many makers to describe their small cars. The word comes from the French word for "automobile", voiture. Between World War I and World War II light-weight racing cars with engines limited to 1500 cc such as the Alfa Romeo 158/159 Alfetta, the Bugatti Type 13 and the original ERAs were known as voiturettes.

In France, in the years after World War II a type of small three-wheeled vehicle voiturette was produced.

In 1990s, voiturette became a French classification for a vehicle weighing less than 350 kilograms (770 lb) empty and carrying a load (i.e. passengers) of not more than 200 kilograms (~440 lb). The top speed is limited to 45 km/h (~30 mph) and engine size to 50 cc or 4 kilowatts for an engine of "another type" for example an electric car.

Such vehicles are sometimes also called "motor quadricycles" or "motor tricycles". The driver's license for them is available to people over 16 years and is in category "B1" and is valid, subject to restrictions, in all European Union countries.

French maker Renault's first car was simply called Voiturette, instead of the common usage then (it would have been called Renault 1¾ CV). The 1900 model (Voiturette C) was considered the first ever sedan (a car with roof).

Other automobiles so described

Microcar is a term often used for the smallest size of cars, with three or four wheels and often an engine smaller than 700 cc (43 cu in). Specific types of microcars include bubble cars, cycle cars, quadricycles and voiturettes, and the Japanese equivalent is the kei car.

Panhard was a French motor vehicle manufacturer that began as one of the first makers of automobiles. It was a manufacturer of light tactical and military vehicles. Its final incarnation, now owned by Renault Trucks Defense, was formed by the acquisition of Panhard by Auverland in 2005, and then by Renault in 2012. In 2018 Renault Trucks Defense, Acmat and Panhard combined under a single brand called Arquus.

De Dion-Bouton was a French automobile manufacturer and railcar manufacturer operating from 1883 to 1953. The company was founded by the Marquis Jules-Albert de Dion, Georges Bouton, and Bouton's brother-in-law Charles Trépardoux.

The Renault Estafette was a light commercial front-wheel drive van, first introduced in 1959 and made by the French automaker Renault between 1959 and 1980, initially using the water-cooled Renault Ventoux engine, then later the Cléon-Fonte engine in a range of body styles. It was replaced by the Renault Trafic.

The Renault Voiturette was Renault's first ever produced automobile, and was manufactured between 1898 and 1903. The name was used for five models.
The first Voiturettes mounted De Dion-Bouton engines. Continental tires were used for the car, a make still used for several modern Renaults today.

Chenard-Walcker, also known as Chenard & Walcker, was a French automobile and commercial vehicle manufacturer from 1898 to 1946. Chenard-Walcker then designed and manufactured trucks marketed via Peugeot sales channels until the 1970s. The factory was at first in Asnières-sur-Seine moving to Gennevilliers in 1906. The make is remembered as the winner of the very first Le Mans 24 Hours Race in 1923.

Sinpar was a French automobile company which was founded in 1946 by Léon Demeester.

The Dalifoil & Thomas was a French automobile manufactured from 1896 until 1898. A voiturette built in the Dulac factory in Montreuil-sous-Bois, it was powered by two separate De Dion engines. In 1899 the company introduced a motor tricycle with a "Dust proof" two-speed constant-mesh gearbox. 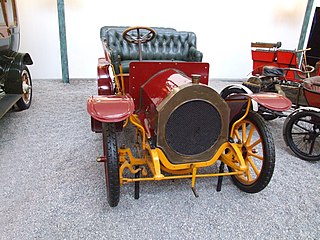 The Gladiator Cycle Company, Clément-Gladiator, was a French manufacturer of bicycles, motorcycles and cars based in Le Pré-Saint-Gervais, Seine.

Corre La Licorne was a French car maker founded 1901 in Levallois-Perret, at the north-western edge of central Paris, by Jean-Marie Corre. Cars were produced until 1947.

Hurtu was a pioneering French car made by Diligeon et Cie based in Albert, Somme from 1896 to 1930. As well as cars, the company also made sewing machines and bicycles.

This is a chronological index for the start year for motor vehicle brands. For manufacturers that went on to produce many models, it represents the start date of the whole brand; for the others, it usually represents the date of appearance of the main model that was produced. 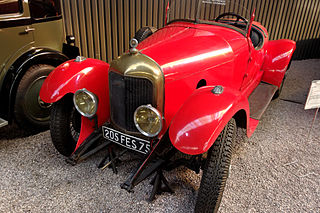 Société Parisienne was a French manufacturer of velocipedes, bicycles and tricycles from 1876. They began limited automobile construction in 1894 and regular light car (voiturette) construction in 1898 or 1899, and they ceased operation in 1903. The vehicles, variously known as Parisienne, Victoria Combination, Eureka, l'Eclair, Duc-Spider and Duc-Tonneau, were manufactured by Société Parisienne E. Couturier et Cie of Paris.