Last updated January 04, 2021
This article is about a town in Ukraine. For the prison in Minsk, Belarus, see Valadarka.
Urban locality in Kyiv Oblast, Ukraine

Battle of Wołodarka took place nearby in May, 1920.

Oakland Township is a township in Butler County, Pennsylvania, United States. The population was 2,987 at the 2010 census.

Leivonmäki is a former municipality of Finland. It became a part of Joutsa in 2008. It is known for its marshy grounds and its national park. First inhabitants are mentioned in 1564. It has been a municipality since 1870. 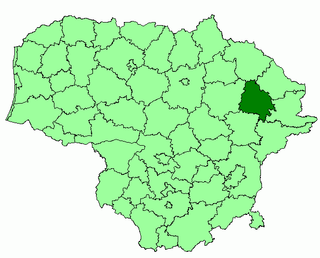 Utena District Municipality is one of 60 municipalities in Lithuania.

Justingrad was a Jewish community in present-day Uman Raion, Ukraine. The Justingrad shtetl was created after Jews were forced out of their homes in the village of Sokolivka. These Jews from Sokolivka moved to the land on the other side of a quarter mile bridge/dam across a lake edge. This shtetl was named Justingrad in honor of Justina, wife of the nobleman who sold the land to the Jews. Many of these Ukrainian Jews left for a better life in the United States around 1900. 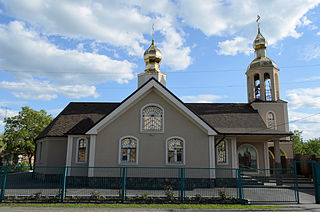 Liubotyn is a city in Kharkiv Oblast (province) of eastern Ukraine. It is designated as a separate raion (district), as a city of oblast significance. Population: 20,646 (2020 est.)

Bíbrka is a town in western Ukraine, located in Peremyshliany Raion of Lviv Oblast (region) about 29 km southeast of Lviv on H09. Its population is approximately 3,849 (2020 est.) . 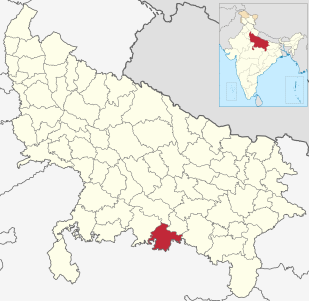 Pohrebyshche is a small town in Vinnytsia Oblast, Ukraine. It is the administrative center of Pohrebyshche Raion (district) in western Ukraine. Pohrebyshche is situated near the sources of the Ros River. Population: 9,514 (2020 est.)

Svatove is a city in Luhansk Oblast (region) of Ukraine. It serves as the administrative center of Svatove Raion. Population: 16,710 (2020 est.) . 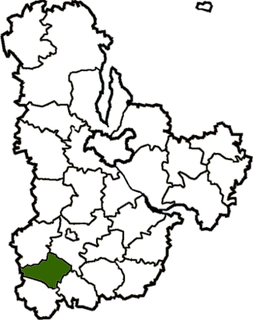 Volodarka Raion is a raion (district) in Kyiv Oblast of Ukraine. Its administrative center is the urban-type settlement of Volodarka. Population: 16,484 (2020 est.) . 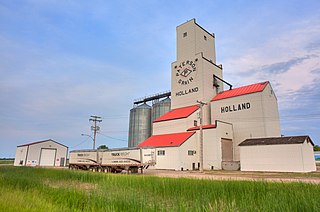 Nanchuan is a district and former county of Chongqing, China, bordering Guizhou province to the south.

Florianowo is a village in the administrative district of Gmina Lubraniec, within Włocławek County, Kuyavian-Pomeranian Voivodeship, in north-central Poland. It lies approximately 9 kilometres (6 mi) east of Lubraniec, 16 km (10 mi) south-west of Włocławek, and 62 km (39 mi) south of Toruń.

Pohrebyshche Raion is a raion (district) of Vinnytsia Oblast in west-central Ukraine. The administrative center of the district is the town of Pohrebyshche. Population: 28,321 (2020 est.)

Ignacew Podleśny is a village in the administrative district of Gmina Parzęczew, within Zgierz County, Łódź Voivodeship, in central Poland. It lies approximately 3 kilometres (2 mi) south of Parzęczew, 16 km (10 mi) north-west of Zgierz, and 23 km (14 mi) north-west of the "actual" regional capital Łódź.

Leonów is a village in the administrative district of Gmina Zgierz, within Zgierz County, Łódź Voivodeship, in central Poland. It lies approximately 8 kilometres (5 mi) north of Zgierz and 15 km (9 mi) north of the regional capital Łódź.

Grabownica is a village in the administrative district of Gmina Łopuszno, within Kielce County, Świętokrzyskie Voivodeship, in south-central Poland. It lies approximately 4 kilometres (2 mi) south of Łopuszno and 26 km (16 mi) west of the regional capital Kielce.

Illintsi Raion is one of the 27 regions of Vinnytsia Oblast, located in southwestern Ukraine. The administrative center of the raion is the town of Illintsi. Population: 36,249 (2020 est.)