In earlier East Slavic history, volost was a name for the territory ruled by the knyaz, a principality; either as an absolute ruler or with varying degree of autonomy from the Velikiy Knyaz (Grand Prince). Starting from the end of the 14th century, volost was a unit of administrative division in Grand Duchy of Lithuania, Poland, Muscovy, lands of modern Latvia and Ukraine. Since about the 16th century it was a part of provincial districts that were called "uezd" in Muscovy and the later Russian Empire. Each uezd had several volosts that were subordinated to the uezd city.

After the abolition of Russian serfdom in 1861, volost became a unit of peasant's local self-rule. A number of mirs are united into a volost, which has an assembly consisting of elected delegates from the mirs. These elect an elder ( starshina ) and, hitherto, a court of justice (volostnoy sud). The self-government of the mirs and volosts was, however, tempered by the authority of the police commissaries ( stanovoi ) and by the power of general oversight given to the nominated "district committees for the affairs of the peasants". [1]

Volosts were abolished by the Soviet administrative reform of 1923–1929. Raions may be roughly called a modern equivalent of both volosts and uezds.

Volost Court was the court electable by the Volost Assembly, which could handle smaller civil and criminal cases. It could sentence people to corporal punishment, fine or short-term incarceration. [2]

In modern Russia, the term has a different meaning. The subdivision into volosts is used in the Republic of Karelia, where volosts have the same status as raions, [ citation needed ] and in Leningrad, Pskov, Samara, and Tula Oblasts, where volosts are considered subdivisions of raions and have the same status as selsovets in other Russian federal subjects.[ citation needed ]

A boyar or bolyar was a member of the highest rank of the feudal nobility in many Eastern European nations, including Kievan Rus', Bulgaria, Russia, Wallachia and Moldavia, and later Romania, Lithuania and among Baltic Germans. Boyars were second only to the ruling princes from the 10th century to the 17th century. The rank has lived on as a surname in Russia, Finland, Lithuania and Latvia where it is spelled Pajari or Bajārs/-e.

A zemstvo was an institution of local government set up during the great emancipation reform of 1861 carried out in Imperial Russia by Emperor Alexander II of Russia. Nikolay Milyutin elaborated the idea of the zemstva, and the first zemstvo laws went into effect in 1864. After the October Revolution the zemstvo system was shut down by the Bolsheviks and replaced with a multilevel system of workers' and peasants' councils ("soviets"). 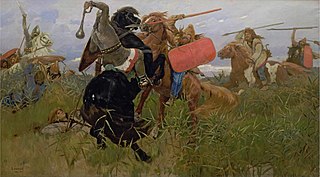 Knyaz or knez is a historical Slavic title, used both as a royal and noble title in different times of history and different ancient Slavic lands. It is usually translated into English as prince or duke, depending on specific historical context and the potentially known Latin equivalents of the title for each bearer of the name. In Latin sources the title is usually translated as princeps, but the word was originally derived from the common Germanic *kuningaz (king).

A governorate, gubernia, province, or government, was a major and principal administrative subdivision of the Russian Empire. After the empire was ended by revolution, they remained as subdivisions in Belarus, the Russian republic, Ukraine, and in the Soviet Union from its formation until 1929. The term is also translated as government, governorate, or province. A governorate was ruled by a governor, a word borrowed from Latin gubernator, in turn from Greek κυβερνήτης.

Obshchina or mir, or selskoye obshchestvo, were peasant village communities as opposed to individual farmsteads, or khutors, in Imperial Russia. The term derives from the word obshchiy. 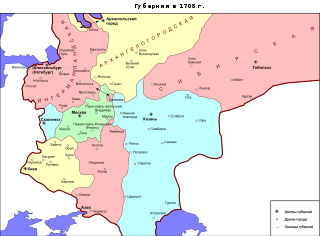 A raion is a type of administrative unit of several post-Soviet states. The term is used for both a type of subnational entity and a division of a city. The word is from the French rayon, and is commonly translated as "district" in English. 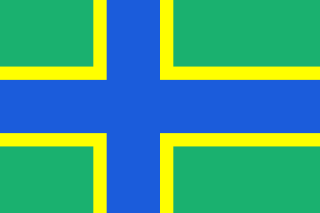 Veps, or Vepsians, are a Finnic people who speak the Veps language, which belongs to the Finnic branch of the Uralic languages. 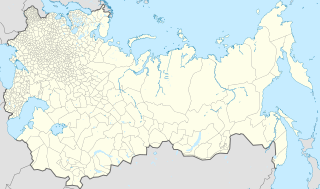 An uezd, or povit in a Ukrainian context, or Kreis in Baltic-German context, was a type of administrative subdivision of the Grand Duchy of Moscow, the Russian Empire, and the early Russian SFSR, which was in use from the 13th century. For most of Russian history, uezds were a secondary-level of administrative division. By sense, but not by etymology, uezd approximately corresponds to the English "county". 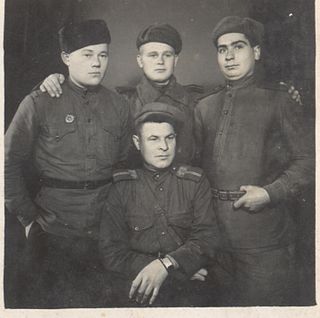 Starshina is a senior non-commissioned rank or designation in the military forces of some Slavic states, and a historical military designation.

The City of Kyiv has a unique legal status compared to the other administrative subdivisions of Ukraine. The most significant difference is that the city is functionally independent of the oblast (province) in which it is located. That is, Kyiv is subordinated directly to the national-level branches of the Government of Ukraine, skipping the provincial level authorities of Kyiv Oblast, but hosting the administrative and infrastructure bodies for the latter.

The judicial system of the Russian Empire was established as part of the system of government reforms of Peter the Great. 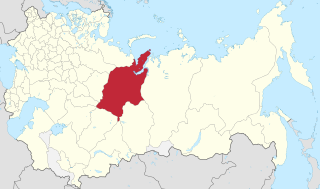 Tobolsk Governorate was an administrative division of the Russian Empire, Russian Republic and RSFSR located in the Ural Mountains and Siberia. It existed from 1796 to 1920; its seat was in the city of Tobolsk, in 1919–1920 in the city of Tyumen.

Onufriivka is an urban-type settlement in Oleksandriia Raion, Kirovohrad Oblast, Ukraine. It hosts the administration of Onufriivka settlement hromada, one of the hromadas of Ukraine. Population: 3,763 . 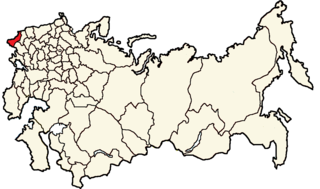 The Bessarabia electoral district was a constituency created for the 1917 Russian Constituent Assembly election.

An uchastok, or dilyanka in Ukrainian usage, was a territorial-administrative unit of the Russian Empire and early Russian SFSR. Throughout most of modern Russian history, uchastoks, which numbered 2,523 throughout the empire by 1914, were a third-level administrative division, below okrugs,uyezds and otdels (counties). In a literal sense, uchastok approximately corresponds to the English term plot, however, in practical usage it corresponds to a sub-county, section or municipal district.