Vytautas Kernagis (May 19, 1951 – March 15, 2008) was a Lithuanian singer-songwriter, bard, actor, director, and television announcer. He is considered a pioneer of Lithuanian sung poetry. [1]

Vytautas Kernagis was born to the family of actors Aleksandras Kernagis  [ lt ] and Gražina Kernagienė  [ lt ]. He attended M.K.Čiurlionis school (first 3 years) and Vilnius 23rd school. In 1973 he graduated from the Lithuanian Academy of Music and Theatre.

Kernagis suffered from gastric cancer and died March 15, 2008. He was cremated and interred in the Antakalnis Cemetery in Vilnius.

Lithuania is a country on the south-eastern shore of the Baltic Sea, a member of the United Nations Organisation, the Organisation for Security and Cooperation in Europe, the European Union, the North Atlantic Treaty Organisation, the World Trade Organisation. Currently, Lithuania maintains diplomatic relations with 182 states Lithuania became a member of the United Nations on 18 September 1991, and is a signatory to a number of its organizations and other international agreements. It is also a member of the Organization for Security and Cooperation in Europe, NATO and its adjunct North Atlantic Coordinating Council, the Council of Europe, and the European Union. Lithuania gained membership in the World Trade Organization on 31 May 2001.

Vilnius is the capital of Lithuania and its largest city, with a population of 580,020 as of 2020. The population of Vilnius's functional urban area, which stretches beyond the city limits, is estimated at 700,275, while according to the Vilnius territorial health insurance fund, there were 729,923 permanent inhabitants as of May 2020 in Vilnius city and Vilnius district municipalities combined. Vilnius is in southeastern Lithuania and is the second-largest city in the Baltic states. It is the seat of Lithuania's national government and the Vilnius District Municipality.

Lithuanian University of Educational Sciences was a university in Vilnius, Lithuania, which specialized in preparing school teachers and other educators. As of March 2013 it had approximately 8,500 students and 528 members of academic staff. 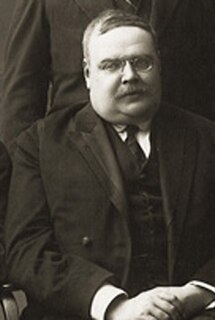 Michał Pius Römer was a Lithuanian lawyer, scientist and politician.

Bronius Kutavičius is a Lithuanian composer. From 1959 to 1964 Kutavičius studied Music Composition at the Lithuanian State Conservatory in lt:Antanas Račiūnas's composition class in Vilnius. He has written numerous oratorios and operas, among them The Last Pagan Rites, Lokys the Bear and The Gates of Jerusalem. He won the Lithuanian State Prize in 1995, and the prize of the Probaltica Festival in Toruń (Poland) in 1996. Most of the works of B. Kutavičius are inspired by ancient Lithuanian polytheistic belief and music.

The Voivode of Vilnius was a high-ranking officer in the Grand Duchy of Lithuania who governed the Vilnius Voivodeship from 1413. He was considered as the most influential member of the Lithuanian Council of Lords. After the Union of Lublin in 1569, the Voivodes of Vilnius were ranked as the fourth highest, while the Castellans of Vilnius were ranked as the sixth highest officers among the Voivodeships of the Polish–Lithuanian Commonwealth. After the Third Partition of the Commonwealth, the Vilnius Voivodeship was annexed by the Russian Empire and this position was annulled.

Vytautas Merkys was a Lithuanian historian and a professor at Vilnius University.

Vytautas Kolesnikovas is a painter, graphic artist, politician, and signatory of the 1990 Act of the Re-Establishment of the State of Lithuania.

Rimvydas Valatka is a Lithuanian journalist and signatory of the 1990 Act of the Re-Establishment of the State of Lithuania. He graduated from Vilnius Pedagogical University in 1980 with a degree in history education. He now works as deputy chief editor of the largest Lithuanian daily Lietuvos rytas and editor-in-chief of its online edition at lrytas.lt.

The Lithuanian Auxiliary Police Battalions were paramilitary units (battalions) formed during the occupation of Lithuania by Nazi Germany between 1941 and 1944. Similar units, known as Schutzmannschaft-Bataillonen, were organized in other German-occupied territories of Eastern Europe. In Lithuania, the first battalions originated from units formed during the anti-Soviet Uprising of June 1941. Lithuanian activists hoped that these units would become the basis for the reestablished Lithuanian Army. Instead, these units were absorbed into the German military apparatus and aided German forces: guarded strategic objects, engaged in anti-partisan operations, participated in the Holocaust. The 12th and the 13th battalions, tracing their roots from the Tautinio darbo apsaugos batalionas (TDA), were particularly active in the executions of the Jews and were responsible for estimated 78,000 Jewish deaths in Lithuania and Belarus. While the battalions were often deployed outside Lithuania, they generally did not participate in combat. In total, 26 battalions were formed and approximately 13,000 men served in them. In July–September, 1944, the remaining units were combined into two Lithuanian Volunteer Infantry Regiments.

John of the Lithuanian Dukes was Bishop of Vilnius (1519–36) and of Bishop of Poznań (1536–38). He was the bishop when Protestantism was making the first inroads into the Grand Duchy of Lithuania and took the first steps in combating it. John was an illegitimate son of Sigismund I the Old, King of Poland and Grand Duke of Lithuania, and his mistress Katarzyna Telniczanka.

Gintautas Šulija is a Lithuanian business lawyer and legal scholar, Doctor of law, PhD with post-graduation (LL.M.), associate professor at the Faculty of Law of Kazimieras Simonavičius University, a co-author of commentary of the Lithuanian Criminal Code (2000), and co-founder and managing partner of Šulija Partners Law Firm Vilnius.

Rūta Society was a Lithuanian cultural society in Vilnius, then part of the Russian Empire, active from 1909 to the outbreak of World War I in 1914. It organized various events, including lectures, literary evenings, and musical performances, but it is most noted for its contribution to the development of the Lithuanian theater. In total, Rūta staged about 50 plays.