Willem "Wim" Alexander Frederick Joseph Tumbelaka (24 April 1920 –11 September 2012) was an Indonesian physician and academician. He worked in the Faculty of Medicine of the University of Indonesia (UI) and became the acting dean of the faculty for several months in 1976. He also became the acting rector of the university from 1985 until 1986.

Tumbelaka was born on 24 April 1920 in Kotamobagu,Sulawesi,as the second child of ten children. [1] His father,Isaac J. Tumbelaka,worked as an attorney,while his mother,Margaretha Siwydan,was an obstetrician. [2] Upon completing his primary studies at the Hollandsch-Inlandsche School in Kotamobagu in 1933,Tumbelaka moved to Tomohon and completed his secondary education at the Meer Uitgebreid Lager Onderwijs in 1936. Tumbelaka was unable to continue his studies for two years due to a lack of funding from his parents. He was able to continue to study after one of his uncles sent him to study in Surabaya. On his final year in Surabaya,the Japanese invaded Surabaya,and the school he was studying on was closed. With the help of politician Sam Ratulangi,Tumbelaka was sent to Japan to study medicine. [1]

Tumbelaka returned to Indonesia after the surrender of Japan in 1945 and initially refused Ratulangi's suggestion to further study medicine in the University of Amsterdam. He relented after being convinced by Ratulangi and graduated from the university in 1955. [1]

After graduating from the University of Amsterdam,Tumbelaka returned to Indonesia and began his career as a physician at the Jebres Public Hospital in Surakarta. Two years later,Tumbelaka moved to Jakarta and became a pediatrician at the Dr. Cipto Mangunkusumo Hospital. [1] He concurrently continued his medical studies at UI's faculty of medicine. He also studied pediatric gastroenterology at the University of Western Ontario from 1961 until 1962 [3] and at the University of Colombo in 1975. [4] As a pediatrician,Tumbelaka held leading positions in pediatric organizations such as the Indonesian Pediatrician Association and the ASEAN Pedriatic Federation. He actively promoted the usage of breast milk for infants and invented honey sugar milk (susu gula madu,SGM),which became a popular variant of milk in Indonesia. [1] [2]

In 1970,Tumbelaka was appointed as the third deputy dean of the medicine faculty by Mahar Mardjono,the faculty's dean. Mahar Mardjono became the rector of UI in 1974 and Djamaloedin was appointed in its place. Djamaloedin promoted Tumbelaka from the post of third deputy dean to first deputy dean. Due to his health condition,Djamaloedin resigned as dean on August 1976 and Tumbelaka became the acting dean of the faculty until December that year. [5] He was replaced as first deputy dean in 1977 and became a professor in pediatrics in 1981. [1]

On 15 January 1982,Mahar Mardjono was replaced by historian Nugroho Notosusanto. Nugroho then appointed Tumbelaka as the first deputy rector of the university. A year later,Nugroho was appointed as the Minister of Education and Culture in Suharto's Fourth Development Cabinet. Nugroho was not relieved from the position of rector,but the day-to-day activities of the university was ran by Tumbelaka. Nugroho died suddenly on 3 June 1985 and Tumbelaka became as acting rector of the university. Tumbelaka handed over his position to Sujudi,the new elected rector,on 15 January 1986. [6] He retired from UI shortly after. [2]

Upon his retirement from UI,Tumbelaka moved to the Tarumanagara University,a private university,and became the dean of university's medicine faculty. [2] He also became the chairman of the Medical Ethics Honorary Council of the Indonesian Medical Association. [1]

Tumbelaka died on 11 September 2012 in Jakarta. His body was laid at the main lobby of UI's faculty of medicine before his interment at the Menteng Pulo Public Cemetery. [7]

Tumbelaka was married to Concordia Sophia Lodola Mononutu,the niece of former minister Arnold Mononutu. The couple has three children. On one occasion,Tumbelaka had to expel two of his children,who were studying at UI's medical faculty,for failing to pass an evaluation. [1]

The University of Indonesia is a public university in Depok,West Java and Salemba,Jakarta,Indonesia. It is one of the oldest tertiary-level educational institutions in Indonesia,and is generally considered one of the most prestigious universities in Indonesia,along with the Gadjah Mada University and Bandung Institute of Technology. In the 2019 QS World Universities Ranking,UI is ranked 1st in Indonesia,57th in Asia and 292nd in the world.

University of Mataram(Unram) is a public university in Mataram,West Nusa Tenggara,Indonesia. It was established on October 1,1962. Its current rektor is Prof. Ir. Bambang Hari Kusumo,M.Agr.St.,PhD. The previous rektor from 2018-2022 was Dr. Lalu Husni,S.H,M.Hum.

Brigadier General Raden Panji Nugroho Notosusanto was an Indonesian short story writer turned military historian who served as professor of history at the University of Indonesia. Born to a noble family in Central Java,he exhibited a high degree of nationalism from a young age. During the Indonesian National Revolution from 1945 to 1949 he saw active service as a member of the Student Army,working reconnaissance. Despite wanting to remain in the military,under influence by his father he continued his education,eventually enrolling in the faculty of literature at the University of Indonesia. During the 1950s he wrote extensively and was active in numerous political and academic groups,finally graduating with a degree in history in 1958. 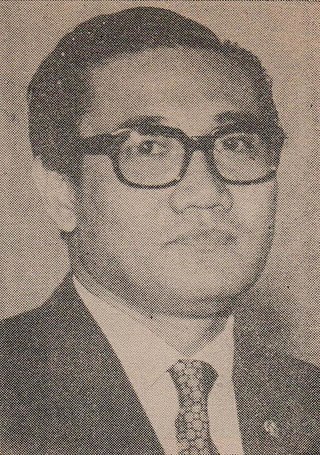 Ali Wardhana,more colloquially known as Bung Ali,was an Indonesian professor and economist,who served as the third Coordinating Minister for Economics,Finance,Industry,and Development of Indonesia from 1983 until 1988 and the 21st minister of finance of Indonesia from 1968 until 1983. He was one of Indonesia's most senior economic policy-makers during the New Order regime of president Suharto,being a member of the influential Berkeley Mafia,a group of American educated Indonesian economists who shaped the Indonesian economy during the New Order. He was the longest serving Minister of Finance,as well as the fifth longest serving minister in Indonesian history.

Pratikno is an Indonesian politician and academician. He is currently the Minister of State Secretariat of Indonesia in the Onward Indonesia Cabinet,the cabinet appointed by President Joko Widodo for his second term in office 2019-2024. 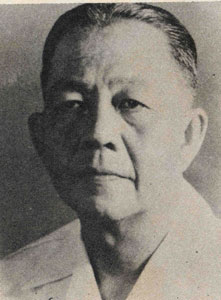 Arnoldus Isaac Zacharias Mononutu was an Indonesian nationalist,politician,and national hero of Indonesia from North Sulawesi,who served as Minister of Information from 1949 until 1950,and the again from 1951 until 1953. He later became the first Indonesia Ambassador to China,as well as the third Rector of Hasanuddin University. A member of the Indonesian National Party,Mononutu was also involved in the struggle for Indonesia's independence. Having gained his sense of nationalism during his post-secondary studies in the Netherlands. In 2020,he was posthumously given the honorary title of National Hero of Indonesia. 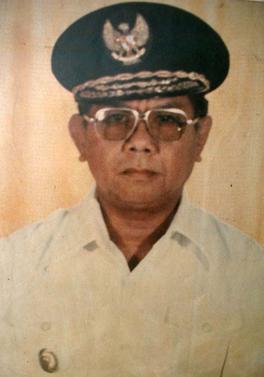 Harun Al Rasyid Zain,also known as Datuk Sinaro,was an Indonesian teacher,economist and bureaucrat. He served as the Minister of Manpower and Transmigration in the Third Development Cabinet and for two periods (1967-1977) he was the governor of West Sumatra. He was also a Rector of the Andalas University in Padang,Indonesia.

State University of Jakarta is a public university in Jakarta,Indonesia. Founded in 1964 as the Jakarta Institute of Teaching and Education,it was later converted into a state university by the Indonesian government in 1999.

Moeslim Taher,S.H. was an Indonesian educator who founded Jayabaya University on October 5,1958. Taher was later appointed become 2nd rector of the Jayabaya University for the period 1962–1988 replacing Prof. Mr. S. A. Hakim as first rector. In addition,Taher was appointed by Soeharto as the Supreme Advisory Council of the Republic of Indonesia from 1983 to 1988.

Amany Burhanuddin Umar Lubis is an Indonesian muslim women scholar of Mandailing-Egyptian descent. As an Islamic scholar,Amany was appointed as chairperson of the Indonesian Ulema Council for Women,Youth and Families for the 2015–2020 period. On January 7,2019,she was appointed as rector of the Syarif Hidayatullah State Islamic University Jakarta by the minister of religion affairs of the Republic of Indonesia,Lukman Hakim Saifuddin. Her new position made her as the first woman who served as chancellor of the largest Islamic university in Indonesia,Syarif Hidayatullah State Islamic University Jakarta.

Soekisno Hadikoemoro was a physician who served as the 5th rector of the Cenderawasih University from 1970 until 1974.

Ari Kuncoro is an Indonesian banker,economist,author and university administrator,and the current rector of the University of Indonesia. He took office on 4 December 2019,succeeding Muhammad Anis. Before becoming the rector of the University of Indonesia (UI),Ari taught at the Faculty of Economics and Business,becoming the faculty's dean from 2013 until 2019. Ari also held the office of chief commissioner of the Bank Negara Indonesia since 2017 and continued to held the office after his election as rector. Ari ended his term as chief commissioner in February 2020 and assumed the office of deputy chief commissioner of the Bank Rakyat Indonesia (BRI) in the same year. His new post sparked protests from the university's internal,who demanded him to resign from his position in BRI as it violated the university statute. In response to this,the government removed the limitations from the university statute in a controversial amendment,but Ari later resigned from his position in BRI in July 2021.

Apolo Safanpo is an Indonesian academician and bureaucrat who is serving as the Governor of South Papua in an acting capacity since 11 November 2022. He also held office in the Ministry of Home Affairs as the minister's expert staff for governance since 9 November 2022. Before working in the bureaucracy,Apolo was an academician in the Cenderawasih University,with his highest office being the university's rector from 2017 until 2022.

Onesimus Sahuleka is an Indonesian academic who served as the Rector of Cenderawasih University from 2015 until 2017.

Muhammad Kamil Tadjudin was a physician and professor in medical biology from Indonesia. He served as the Rector of the University of Indonesia (UI) from 1994 until 1998.

Sujudi was an Indonesian physician and academic who became the country's Minister of Health from 1993 until 1998. Previously,he worked in the University of Indonesia as a lecturer,with his highest office being the university's rector from 1986 until 1994.

Asman Boedisantoso Ranakusuma is an Indonesian physician and academician who served as the Rector of the University of Indonesia from 1998 until 2002.

AndiRasdiyanah Amir was an Indonesian Islamic scholar and bureaucrat. Rasdiyanah was the rector of the Alauddin Islamic State Institute from 1985 to 1994. She was the first female to lead an Islamic higher education institution in Indonesia as well as the first female rector in the eastern part of Indonesia. At the end of her term as rector,Rasdiyanah was appointed by the minister of religious affairs as the director general for Islamic insitutions. She was replaced in the position and continued teaching at the Alauddin Islamic State Institute until her death.