William Moore "Terence" Gorman (17 June 1923 – 12 January 2003) was an Irish economist and academic. He was predominantly a theorist and is most famous for his work on aggregation and separability of goods, and in this context he developed his famous Gorman polar form. Gorman's career saw him a professor at such schools as Oxford, London School of Economics, Johns Hopkins, and Stanford, and he was honoured with the Presidency of the Econometric Society in 1972. His work was often highly technical and theoretical in nature, which made him incomprehensible to many of his contemporaries, but his keen eye for applications has given his work a lasting influence on modern economics.

Gorman was born in Kesh in County Fermanagh, Northern Ireland, on 17 June 1923. He spent his early childhood in Lusaka, Rhodesia, where his African nanny called him Terence, saying that William was not a proper Irish name; he was subsequently known as Terence, or 'Terry', throughout his life. After his father was shot dead when Gorman was only four years old, he returned with his mother and her staff to her family estate in County Fermanagh, Northern Ireland, where he was brought up.

He attended Mount Temple College in Dublin, an exclusive preparatory school, and Foyle College (now Foyle and Londonderry College) in Derry before moving on to Trinity College Dublin, in 1941, where he was elected a Scholar in 1943. From 1943 to 1946, he interrupted his studies to serve in the Royal Navy as a rating and then petty officer, before returning to graduated in 1948 in economics and in 1949 in mathematics, by which time he was involved with Alan Turing on the development of the computer. While at Trinity, he met his future wife, Dorinda. Gorman was highly influenced by Trinity Professor George A. Duncan, as well as by Professor James Davidson at Foyle College.

He began his academic career at the University of Birmingham in England, where he taught from 1949 to 1962. Birmingham, at that time, was a leading centre for theoretical research, employing professors including Frank Hahn, and Maurice McManus. It was during this period that what is now called Gorman polar form was rigorously introduced in an article entitled, "On a class of preference fields," published in the journal Metroeconomica, in August 1961.

After Birmingham, he held the chair of economics at Oxford from 1962, and subsequently the chair at the London School of Economics in 1967, where he introduced an American-style mathematical economics programme. He was a fellow of Nuffield College at Oxford from 1979, a senior research fellow in 1984 and an emeritus fellow in 1990. He also spent some time in the United States as a visiting fellow, when he was engaged in research at the Iowa, Johns Hopkins, the North Carolina, and at Stanford.

After retirement, he continued to live in Oxford, although he spent his summers in County Cork, until in his last years illness impaired his mobility.

Gorman credited his early education at Trinity and Foyle for teaching him "to think of mathematics and economics as styles of thought, not collections of theorems," and his experience at Birmingham taught him "to think of the social sciences as a unity with history as one way of holding them together" . With this foundation, Gorman's theory was based both in empirical research and on the opinions and views of social scientists. Above all, however, Gorman was a mathematically talented economist, and his penchant for inter-disciplinarianism was only present in as much as that diversity presented him with tools to use or develop to explore the links between individual preferences and market behaviour.

The Gorman Lectures in Economics, named after W. M. Gorman, is an annual event that takes place at the Department of Economics of University College London. The lectures are not confined to any sub-discipline of economics, and they are usually developed into a book, published by co-sponsor, Princeton University Press. The first lectures were delivered by the Nobel Laureate Professor James Heckman of Chicago University in December 2001. Avinash Dixit delivered the lectures in 2003. Robert M. Townsend of MIT delivered them in 2010. The 2011 lecture was given by Jerry Hausman of MIT and the 2013 lecture by Pierre-Andre Chiappori of Columbia. 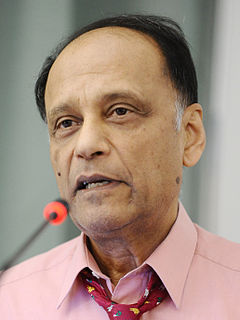 Sir Partha Sarathi Dasgupta, FRS, FBA, is an Indian-British economist who is the Frank Ramsey Professor Emeritus of Economics at the University of Cambridge, United Kingdom; Fellow of St John's College, Cambridge, and Visiting Professor at the New College of the Humanities, London.

Dame Frances Anne Cairncross, is a British economist, journalist and academic. She is a senior fellow at the School of Public Policy, UCLA. She formerly chaired the executive committee of the Institute for Fiscal Studies. From 2004 to 2014, she was the Rector of Exeter College, Oxford. From 2015, Cairncross has been chair of the Court of Heriot-Watt University.

John Michael David Coey, known as Michael Coey, is a Belfast-born experimental physicist working in the fields of magnetism and spintronics. He got a BA in Physics at Jesus College, Cambridge (1966), and a PhD from University of Manitoba (1971) for a thesis on "Mössbauer Effect of 57Fe in Magnetic Oxides" with advisor Allan H. Morrish. Trinity College Dublin (TCD), where he has been in the physics department since 1978, awarded him ScD (1987) and the University of Grenoble awarded him Dip. d'Habilitation (1986) and an honorary doctorate (1994). He served as Erasmus Smith's Professor of Natural and Experimental Philosophy at TCD from 2007 to 2012.

John Young Campbell is a British-American economist. He is the Morton L. and Carole S. Olshan Professor of Economics at the Department of Economics at Harvard University.

Robert (Roy) Charles Geary was an Irish statistician and founder of both the Central Statistics Office and the Economic and Social Research Institute. He held degrees from University College Dublin and the Sorbonne. He lectured in mathematics at University College Southampton (1922–23) and in applied economics at Cambridge University (1946–47). He was a statistician in the Department of Industry and Commerce between 1923 and 1957. The National University of Ireland conferred a Doctorate of Science on him in 1938. He was the founding director of the Central Statistics Office (Ireland). He was head of the National Accounts Branch of the United Nations in New York from 1957 to 1960. He was the founding director of the Economic and Social Research Institute where he stayed till his retirement in 1966. He was an honorary fellow of the American Statistical Association and the Institute of Mathematical Statistics. In 1981, he won the Boyle Medal.

Frances P. Ruane,, is an Irish academic economist and former director of the Economic and Social Research Institute (ESRI) in Dublin, Ireland 2006−2015. She is recognised for her research on FDI and its effect on host economies. She has also been a regular appointee to State and public policy boards and committees, including most recently acting as Chair of the Statistical and Social Inquiry Society of Ireland (2016-2019) and the National Competitiveness Council.

Richard Irvine Best, often known as R. I. Best, was an Irish scholar who specialised in Celtic Studies.

Frank Horace Hahn FBA was a British economist whose work focused on general equilibrium theory, monetary theory, Keynesian economics and critique of monetarism. A famous problem of economic theory, the conditions under which money, which is intrinsically worthless, can have a positive value in a general equilibrium, is called "Hahn's problem" after him. One of Hahn's main abiding concerns was the understanding of Keynesian (Non-Walrasian) outcomes in general equilibrium situations. 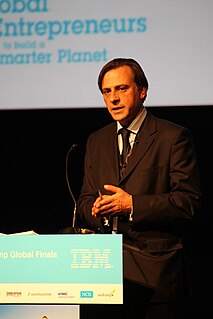 Dr Constantin Gurdgiev is a Russian economist and professor based in Dublin, Ireland. He is a former editor of Business & Finance Magazine. Gurdgiev is well known in Ireland from his frequent appearances on the Tonight with Vincent Browne television show on TV3 during the great recession. Gurdgiev identifies as a libertarian.

Thomas Noel Mitchell is an Irish academic and university administrator who served as 42nd provost (president) of Trinity College, Dublin from 1991 to 2001.

Andrew Chesher, FBA is a British economist and the William Stanley Jevons Professor of Economics and Economic Measurement at the Department of Economics, University College London and Director of the ESRC Centre for Microdata Methods and Practice (CeMMAP) at the Institute for Fiscal Studies. He is a Fellow of the Econometric Society, Foreign Honorary Member of the American Economic Association, and Fellow of the British Academy where he chaired its Economics and Economic History Section from 2009 to 2012. Additionally, Chesher was the President of the Royal Economic Society from 2016-2018 and from 2001 to 2005 he was Chair of the Economic and Social Research Council's Research Grants Board.