WHRB is a commercial FM radio station in Cambridge, Massachusetts. It broadcasts at 95.3  MHz and is operated by students at Harvard College.

WHRB was one of America's first college radio stations, initially signing on as a carrier current station on December 2, 1940. After acquiring funding from The Harvard Crimson the station's first call sign was WHCN (Harvard Crimson Network). It broke from the Crimson in 1943 and adopted the call sign WHRV (Harvard Radio Voice). Harvard Radio Broadcasting Co., Inc., the non-profit corporation that owns the station, was formed February 1, 1951, and the current call sign adopted. [1]

In order to reach audiences beyond Harvard's campus, the corporation acquired a commercial FM broadcast license from the Federal Communications Commission (FCC) and began regular broadcasting on May 17, 1957 at 107.1 MHz. A few years later, the station changed frequency to 95.3 MHz, where it has remained since. The broadcast area expanded considerably in 1995 when the main transmitter was relocated from atop Holyoke Center (now called the Smith Campus Center) in Harvard Square to its present location atop One Financial Center in downtown Boston. (A facility remains at the Smith site for backup purposes.) Broadcasts went global when internet retransmission of its programs began on November 18, 1999. In 2009, WHRB made available for download the first stand-alone college radio station iPhone app. [2]

Some of WHRB's regular programs have long histories of their own. For example, the country music program Hillbilly at Harvard dates back to 1948, [5] and Sunday Night at the Opera is one of the longest-running programs in its genre in the United States. The station's underground rock department, Record Hospital, began in 1984 and hosts an annual music "fest".

WHRB also broadcasts live play-by-play coverage of all Harvard University football and men's hockey games, along with occasional broadcasts of other Harvard sports like men's basketball and women's hockey, and is the Boston area home, in season, for the weekly broadcasts of the Metropolitan Opera.

WHRB alumni are called ghosts in the lingo which has developed at the station; [7] the term refers to their tendency to "haunt" the station after "death" (graduation).

WFIU is a public radio FM station broadcasting from Indiana University in Bloomington, Indiana. The station is a member station of NPR, Public Radio International and American Public Media. Its program schedule consists of classical music, jazz, and news and information, with specialty programming on the weekends. WFIU's broadcast signal, and those of its translators, reaches portions of central, western, and southern Indiana.

KING-FM is a non-commercial classical music radio station in Seattle, Washington. It is owned by Classic Radio, a nonprofit organization. The studios and offices are on Harrison Street in Seattle. KING-FM holds periodic on-air fundraisers to help support the station through listener contributions.

WPPZ-FM is a commercial FM radio station licensed to serve Pennsauken, New Jersey in the Philadelphia radio market. The station is owned by Urban One, through licensee Radio One Licenses, LLC, and broadcasts an Urban Oldies format. Studios are located in Bala Cynwyd and the broadcast tower used by the station is located atop One Liberty Place in Center City, Philadelphia at.

WJIB is a radio station based in Cambridge, Massachusetts and serving the Boston DMA. The playlist draws from 5,400 records, concentrating on adult standards from the 1930s through the 1960s, and softer pop music from the 1950s and 1960s. It is owned by Bob Bittner Broadcasting, along with sister station WJTO in Bath, Maine. WJIB runs no commercial advertisements, and broadcast in AM stereo until the summer of 2012. On August 4, 2017, the station began simulcasting on an FM translator at 101.3 MHz, W267CE.

WBAA and WBAA-FM are the call signs for two American radio stations owned by Purdue University in West Lafayette, Indiana—an AM station at 920 kHz and an FM station at 101.3 MHz. Both broadcast from studios in the Edward C. Elliott Hall of Music on the Purdue campus, and the transmitters are located in Lafayette, Indiana. 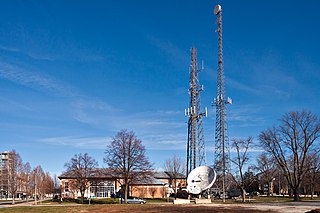 WILL-FM is a public broadcasting station owned by the University of Illinois at Urbana–Champaign and licensed to Urbana, Illinois, United States. It is operated by Illinois Public Media, with studios located at Campbell Hall for Public Telecommunication on the university campus. WILL-FM broadcasts with a grandfathered Effective Radiated Power (ERP) of 105,000 watts at an antenna HAAT of 259 meters (850 ft).

WXTK is a news/talk radio station licensed to West Yarmouth, Massachusetts, and headquartered in Hyannis, Massachusetts. The station is owned by iHeartMedia, Inc.. It is the direct descendant of Cape Cod's first commercial radio station, WOCB.

WRVE is a commercial FM radio station licensed to Schenectady and serving the Capital District and Upper Hudson Valley of New York. It broadcasts a Hot Adult Contemporary radio format and calls itself "99.5 The River," referring to the Hudson River. The station is owned by iHeartMedia as one of seven radio stations owned by the company in the Albany-Schenectady-Troy radio market. Studios and offices are at Riverhill Center on Troy-Schenectady Road in Latham, New York. The transmitter is located off Pinnacle Road in Guilderland, New York.

KUAT-FM is a radio station operated out of the University of Arizona and serving the Tucson, Arizona, metropolitan area. It operates on 90.5 MHz and on K209AF 89.7 MHz on the FM dial with a classical format.

WHQR is the National Public Radio (NPR) member station for Southeastern North Carolina and Myrtle Beach, broadcasting on the FM band 91.3 MHz. Based in Wilmington and operated by Friends of Public Radio, Inc.. It airs NPR, American Public Media, Public Radio International, and BBC programming as well as classical, jazz and adult album alternative music. WHQR hosts concerts and events in their gallery space as well as live-on-the air music with the original Soup to Nuts Live program.

WZZN is a commercial FM radio station licensed to Union Grove, Alabama, and serving the Huntsville media market. The station is owned by Neighbors Broadcast Company, LLC, and airs a sports radio format, affiliated with the ESPN Radio Network.

Texas Public Radio, or TPR is the on-air name for a group of public radio stations serving south central Texas - including San Antonio and the Texas Hill Country - and the Big Country region of West Central Texas. All are affiliated with National Public Radio.

KYTT is a Christian radio station licensed to Coos Bay, Oregon. The station is owned by Lighthouse Radio Group.

KLRC is a non-commercial FM radio station licensed to Tahlequah, Oklahoma. It serves sections of Northwest Arkansas, Eastern Oklahoma and Southwest Missouri. KLRC broadcasts a Contemporary Christian radio format and is owned by John Brown University. It is simulcast on KLAB at 101.1 MHz in Siloam Springs, Arkansas, as well as FM translators 99.1 K256BG in Bentonville, 101.1 K266BS in Van Buren and 103.5 K278BG in Springdale. KLRC and KLAB use periodic on-air fundraisers to seek support from listeners for the running of the stations.

WFMT is an FM radio station in Chicago, Illinois, featuring a format of fine arts, classical music programming, and shows exploring such genres as folk and jazz. The station is managed by Window To The World Communications, Inc., owner of WTTW, one of Chicago's two Public Broadcasting Service (PBS) Public television stations. WFMT is also the primary station of the WFMT Radio Network, and the Beethoven and Jazz Networks. WFMT transmits from the Willis (Sears) Tower.

WMNE was a pioneer commercial FM radio station, which was the second of two mountain-top broadcasting stations established by the Yankee Network. It began regular programming, as experimental station W1XER, in December 1940. In 1941 it was licensed for commercial operation from studios in Boston, initially with the call sign W39B, which was changed to WMTW in 1943. In late 1946 the station's designated community of license was changed to Portland, Maine, and its call letters became WMNE.