The Wadamisaki Line (和田岬線, Wadamisaki-sen) is the spur line of the Sanyō Main Line, operated by West Japan Railway Company (JR West) and connecting Hyogo on the main line and Wadamisaki.

The 2.7-kilometre (1.7 mi) line has only two stops, and only operates during morning and evening, and mainly serves commuters to the Mitsubishi Heavy Industries and Mitsubishi Electric factories in the Wadamisaki industrial area of Kobe.

Although the line is officially part of the Sanyo Main Line, there is no regular through service between the branch and the main line, and Wadamisaki Branch trains depart from a separate platform at Hyogo. Because the line has no intermediate station and Wadamisaki Station is unmanned, all fare collection is conducted at Hyogo. The line makes just two daily roundtrips on weekends, with additional trips for events at Noevir Stadium, the home stadium of J-League club Vissel Kobe.

There is also a spur to the now-defunct Hyōgo Kaigan Line (operated 1910–1984) about 1 km away from Hyōgo Station and a link to the Mitsubishi Heavy Industries shipbuilding facility at Kobe Shipyard just after Wadamisaki Station. 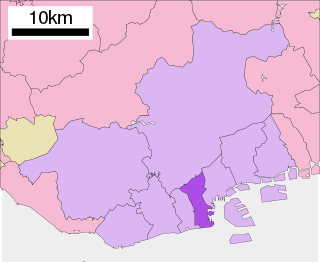 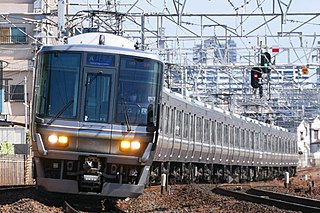 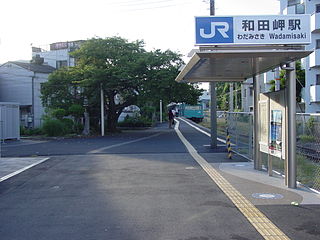 The Kakogawa Line is a railway line in Hyōgo Prefecture, Japan, operated by West Japan Railway Company, which connects the cities of Kakogawa and Tamba. 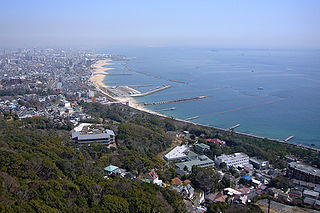 The Sumaura Ropeway is Japanese aerial lift line in Kōbe, Hyōgo, operated by the Sanyō Electric Railway. Opened in 1957, the line climbs Mount Hachibuse (246m) of the Suma coast. At the summit, there is a transfer to the Carlator, a sort of escalator with baskets. Carlator is a portmanteau of "Car" and "escalator". 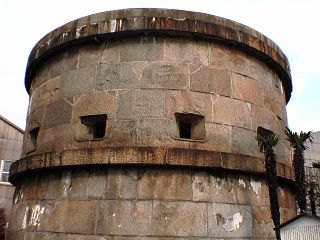 The Wadamisaki Battery is a coastal defense located in Hyōgo-ku, Kobe, Japan. It was built in 1864 by the Tokugawa shogunate in the Bakumatsu period, shortly before the end of the Shōgun's reign. One of many batteries built by the shogunate towards the end of its reign, the Wadamisaki Battery is the only one remaining from several that were built around Osaka Bay and is today listed in the Japanese government's register of historic sites.