Wallada was the daughter of Muhammad III of Córdoba, one of the last Umayyad Cordoban caliphs, who came to power in 1024 after assassinating the previous caliph Abderraman V, and who was assassinated himself two years later in Uclés. Her early childhood was during the high period of the Caliphate of Córdoba, under the rule of Al-Mansur Ibn Abi Aamir. Her adolescent years came during the tumultuous period following the eventual succession of Aamir's son, Sanchuelo, who in his attempts to seize power from Hisham II, plunged the caliphate into civil war. As Muhammad III had no male heir, Wallada inherited his properties, and used them to open a palace and literary hall in Córdoba. There she offered instruction in poetry and the arts of love to women of all classes, from those of noble birth to slaves purchased by Wallada herself. Some of the great poets and intellectuals of the time also visited.[ citation needed ]

Wallada was an ideal beauty of the time: blonde, fair-skinned and blue-eyed, in addition to being intelligent, cultured and proud. She also was somewhat controversial, walking out in public without a hijab and in the fashion of the harems of Baghdad, she wore transparent tunics and embroidered her verses on the trim of her clothing. Her behavior was regarded by the local mullahs as perverse and was strongly criticized, but she also had numerous people who defended her honor, like Ibn Hazm, the famous author of The Ring of the Dove.[ citation needed ] A Cordovan custom of the time was for poets to compete in finishing incomplete poems. Wallada gained recognition for her skill, particularly as a woman in what was almost entirely a male competition.

One example of Wallada's work is her 'Taraqqab idha ja'a l-zalamu ziyarati' (When night falls, anticipate me visiting you), addressed to Ibn Zaydun. The poem is in the tawil metre (14-syllable hemistichs comprising alternating 3-syllable and 4-syllable feet of a short syllable followed by two or three long ones, rhyming in -ri)

It was during one of these poetry competitions that she met the great love of her life, the poet Ibn Zaydún. Zaydún was also a poet and a nobleman with great political influence who had been making measured political strides towards Cordoba. Because of this and Zaydún's ties with the Banu Yahwar — rivals of her own Umayyad clan — their relationship was controversial and had to remain a secret.

Eight of the nine poems preserved from Wallada were written about their relationship, which apparently ended under contentious circumstances. Written as letters between the two lovers, the poems express jealousy, nostalgia, but also a desire to reunite. Another expresses deception, sorrow and reproach. Five are sharp satires directed against Zaydún, whom she criticized for, amongst other things, having male lovers. In one writing, it was implied that the relationship ended because of an affair between Ibn Zaydún and a "black lover". The verse was as follows:

You know that I am the moon of the skies
But, to my disgrace, you have preferred a dark planet.

Some say that the lover was a slave girl purchased and educated as a poet by Wallada, while others speculate that it could have been a male. A third possibility is that the poem was written in response to the times, as infidelity with black lovers was a common theme in Islamic poetry. [4] The last of the nine poems alludes to Wallada's liberty and independence.

After her split with Zaydún, Wallada entered a relationship with the vizier Ibn Abdús, who was one of Zaydún's major political rivals. Abdús, who was completely enamored with Wallada, would end up seizing Zaydun's properties and having him imprisoned. Soon afterwards Wallada moved into the vizier's palace, and although she never married him, he remained by her side and protected her until his death, well into his 80s.

Wallada died on March 26, 1091, the same day that the Almoravids entered Cordova.

Among Wallada's most outstanding students was Muhya bint al-Tayyani, the young daughter of a fig salesman, whom Wallada welcomed into her house. After Wallada's death, Muhja would go on to write a number of kind satires about her.[ citation needed ] 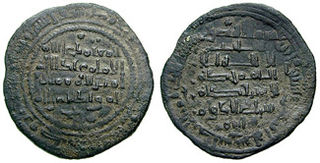 al-Mu'tamid Muhammad ibn Abbad Ibn Ismail al-Lakhmi was the third and last ruler of the taifa of Seville in Al-Andalus. He was a member of the Abbadid dynasty.

Marwan is an Arabic and Kurdish male name. Notable persons with that name include:

Muhammad bin 'Abd ar-Rahman bin 'Obayd Allah, known as Muhammad III was an Umayyad Caliph of Cordoba in the Al-Andalus.

Ghazāla was a leader of the Kharijite movement.

Years link to the corresponding "[year] in poetry" articles.

Abū al-Walīd Aḥmad Ibn Zaydūn al-Makhzūmī (1003–1071) or simply known as Ibn Zaydun or Abenzaidun was a famous Arab poet of Cordoba and Seville. He was considered the greatest neoclassical poet of al-Andalus.

Marwah wa al-Majūn al-Faransi is a classical Middle Eastern love story. It is based on the legend of a young man named Shams al Faransy from Central Asia, born during the 14th century. There were many Arabic versions of the story at the time.

Ibn Baqi or Abu Bakr Yahya Ibn Muhammad Ibn Abd al-Rahman Ibn Baqi was an Arab poet from Córdoba or Toledo in al-Andalus. Baqi is one of the best-known strophic poets and songwriters of Al-Andalus. He moved between Morocco and Al-Andalus and wrote several poems honoring members of a Moroccan family, the Banu Asara, qadis of Salé. He is especially famous for his muwashshahat. In the anthology of Al-Maqqari we find a considerable number of his poems.

Subh, also known as Sobeya, Sobha, and Sabiha Malika Qurtuba, was the spouse of Caliph al-Hakam of Cordoba, and the regent of the Caliphate of Córdoba in Spanish Al-Andalus during the minority of her son, Caliph Hisham II al-Hakam.

ʿĀʾisha bint Aḥmad al-Qurṭubiyya, sometimes spelled Aysha or al-Qurtubiyya, was a tenth-century poet who was the daughter of Ibn Hazm. Most of her work was written in Arabic.

Ḥafṣa bint al-Ḥājj ar-Rakūniyya was a Granadan aristocrat and perhaps one of the most celebrated Andalusian female poets of medieval Arabic literature.

Ḥamda bint Ziyād al-Muaddib was a twelfth-century Andalusian poet from Guadix, sister of Zaynab bint Ziyad al-Muaddib, and described by the seventeenth-century diplomat Mohammed ibn abd al-Wahab al-Ghassani as 'one of the poetesses of the Andalus. She is famous in that region and among all the poets and poetesses of the country.' Her father was a teacher (mu'addib), and she is described as being one of 'the brotherless only daughters of well-off and cultured fathers who gave them the education that they would have given to their male children, if they had had any'. She is notable, inter alia, as one of relatively few named Moorish women poets.

In the surviving historical record, Medieval Arabic female poets are few compared with the number of known male Arabic-language poets: there has been 'an almost total eclipse of women's poetic expression in the literary record as maintained in Arabic culture from the pre-Islamic era through the nineteenth century'. However, there is evidence that, compared with medieval Europe, women's poetry in the medieval Islamic world was 'unparalleled' in 'visibility and impact'. Accordingly, recent scholars emphasise that women's contribution to Arabic literature requires greater scholarly attention.

Laylā bint Ṭarīf was a female warrior and poet and one of the Khawarij, a group known for its members' fanaticism and violent opposition to the established Caliphate, believing that leadership of the Muslim community was not limited to male Arabs of the Quraysh tribe. On the basis of women fighting alongside Muhammad, the Khawarij have viewed combat as a requirement for women, and Laylā bint Ṭarīf is a prominent example of this custom. Laylā was the sister of the Kharijite leader al-Walid ibn Tarif al-Shaybani. After al-Walīd's death, Laylā took on the leadership of his army and fought two battles before her clan forced her to step down.